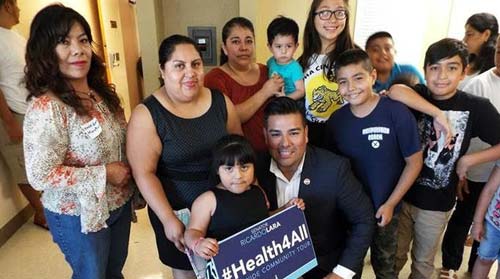 Posted at 15:17h in Health, Immigration by RPadmin 0 Comments 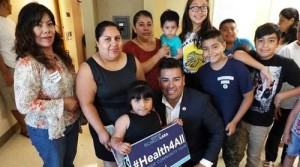 In May 2016, California will become the fifth state to allow undocumented children from low-income families to enroll in comprehensive health care.

Gov. Brown signed legislation Friday that will allow 170,000 undocumented children to smoothly transition from restricted scope Emergency Medi-Cal (the state’s name for Medicaid) to full-scope coverage, by removing barriers to re-applying or re-enrolling. It will also let children with severe and chronic illnesses stay in specialty care.

Once undocumented children enroll in comprehensive Medi-Cal, they will be able to take advantage of preventive services and not have to wait until a medical emergency to seek care.

Earlier this year, the governor allocated $40 million for health care coverage for undocumented children through the Health for All Kids program initiated by Sen. Ricardo Lara, D-Bell Gardens, while committing an allocation of $132 million for each subsequent year.

“When I began the effort to expand health care coverage to undocumented Californians, many people said it couldn’t get done,” Sen. Lara said in a press release. “Just a year later, we are covering all undocumented children, becoming the largest state to do so.”

He said the victory will send a message across the country “that says compassion should always trump bigotry when we’re talking about our immigrant population.” Lara noted that President Obama’s Affordable Care Act excluded undocumented immigrants.

Tanya Broder, a staff attorney with the National Immigration Law Center in its Oakland office, said she was happy that California took this step.

“I look forward to continuing the conversation about the need to cover everyone in California,” she said.

That conversation is expected to resume early next year when Lara’s SB 10 bill, aimed at providing health coverage to the state’s 1.5 million or so undocumented adults, will be taken up by the legislature. The bill will provide health care coverage through a capped Medi-Cal enrollment program, and seek a federal waiver so undocumented residents can purchase health insurance on the state’s online marketplace exchange, Covered California, using their own money.

The other states that currently provide comprehensive health care to children, regardless of their immigration status, are Massachusetts, Illinois, Washington and New York, as well as the District of Columbia.

Earlier this year, Sacramento, Contra Costa, and Monterey counties, along with the County Medical Services Program that serves 35 small and rural counties in California, launched pilot programs to provide limited health benefits to their remaining uninsured, regardless of their immigration status.

“Californians increasingly recognize it is more efficient and effective to offer primary, preventive and specialty care on the front end rather than just expensive emergency and episodic care when it may be too late,” observed Anthony Wright, executive director of Health Access California, a statewide health advocacy coalition.