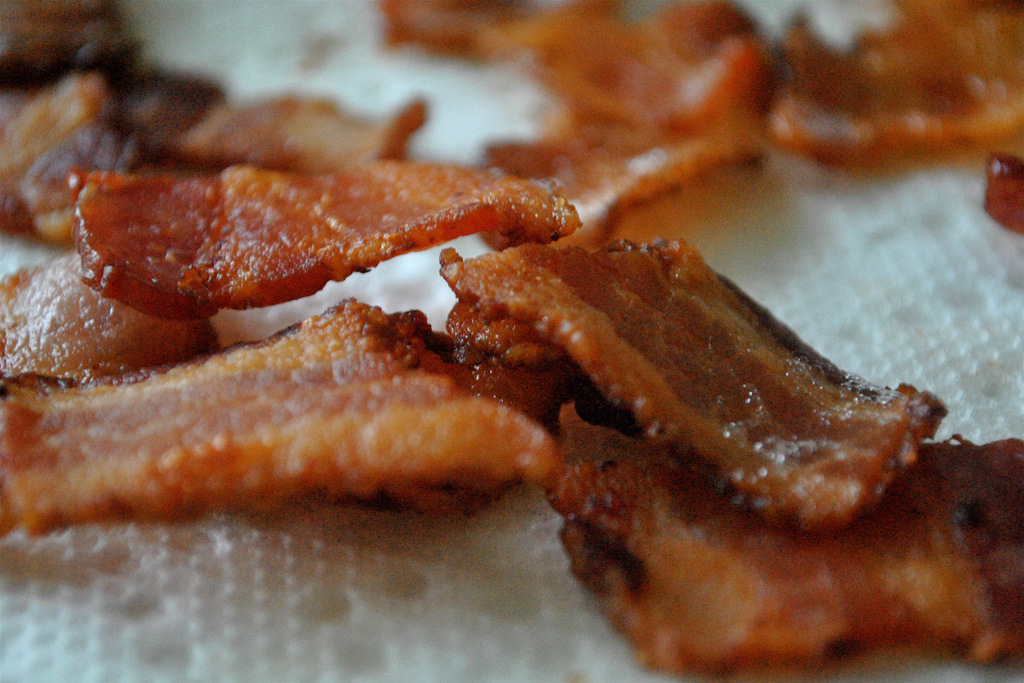 12 Nov Should I Give Up Eating Meat?

Posted at 04:56h in Health, Youth by RPadmin 0 Comments 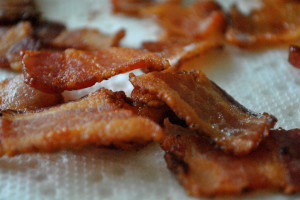 Photo • flikr/cookbookman17
Editor’s Note: A new report linking processed meat to cancer hits close to home in Richmond, where fast food is easy to come by. Writers Ronvel Sharper and Karina Guadalupe say this new information makes them want to change their own eating habits. But it won’t be easy.

Meat Is Murder — Or, At Least, Slow Suicide

A new report from the World Health Organization says that bacon, sausage and other processed meats now rank alongside cigarettes and asbestos as known carcinogens — and red meat likely as well.

This proves just how unhealthy the typical American diet, with meat at the center, has become. Many people don’t know how what they eat could be damaging their health, or they think the bad effects won’t apply to them. As a meat eater myself, I knew bacon was unhealthy, but thought it only made you fatter, not that it could kill you.

I’m appalled that meat companies give people a slow death and profit from it. So what if the food tastes good? Do you want cancer? Do you want some meat company taking your money as you die by their food?

The WHO classified processed meat as carcinogenic on sufficient evidence for colorectal cancer — the second most lethal kind in the United States, causing 50,000 deaths a year. This especially affects communities like Richmond, where we have so many fast food options and our median income remains low. Fast food isn’t generally healthy, but the prices are suited to us. Instead, we should push for more fresh and healthy food in Richmond. The produce we do have is overpriced, and often isn’t even fresh.

In addition, a new Coronary Artery Risk Development in Young Adults study finds that diets incorporating fruits and vegetables now will benefit the hearts of young adults when they’re older. They’ll be less likely to have calcified plaque in their arteries, which can lead to hardened arteries and increase the risk of heart disease.

“People shouldn’t assume that they can wait until they’re older to eat healthy — our study suggests that what you eat as a young adult may be as important as what you eat as an older adult,” said the author of the study, Dr. Michael Miedema, a senior consulting cardiologist and clinical investigator at the Minneapolis Heart Institute.

After reading this, I actually want more fruits and vegetables — and, for the most part, I’m someone who can’t stand them. However, I enjoy a few, such as corn, bananas, blueberries, and other sweet ones. But they’re expensive, and I love my fast food!

So I can’t promise I will eat nothing but fruits and vegetables; it will take determination and willpower, and I will try my best. Just wish me luck, reader! And, maybe, you’ll eat more veggies and fruits yourself.

To Meat Or Not To Meat?

For the past six months, I have contemplated changing to a vegan diet — not only for my health, but also for the environment. I’ve learned about the impact that eating meat has on our planet: consuming meat remains extremely wasteful, causes pollution, and animals undergo abuse and trauma before they are brutally murdered, just to mention a few reasons. And yes, I know that should be more than enough. However, it’s not that simple for me.

Considering my traditional meat-eating Mexican background, this has been a difficult change to make. My mom is an amazing cook, so I’m not sure how I’ll get through without her mole, pozole or tamales. Most traditional Mexican dishes have meat as their main ingredient. But I thought that, at the very least, I would try to become vegetarian.

Now the World Health Organization has announced that processed meats cause cancer — even comparing them to cigarettes. I didn’t know it was that serious. So now I have more than enough reasons to commit to “the change.” I’m not so naive to think this will happen overnight; I know I have a long, hard journey ahead of me, and I’ll have setbacks, but I’m ready for the challenge. I’ve made up my mind.

I’m hoping for a healthier lifestyle, and to feel better about what I contribute to this world. I can only change myself, and that’s where I will start.