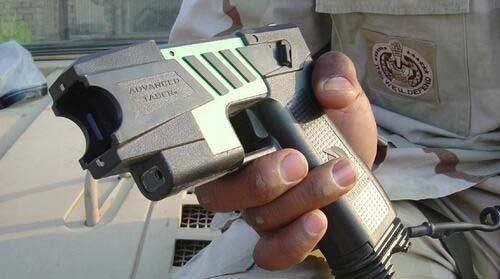 Posted at 23:45h in Police by RPadmin 0 Comments 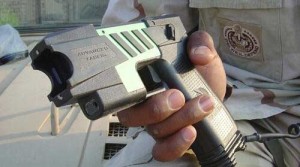 SAN FRANCISCO—In the wake of public outcry over the latest police shooting of an unarmed African American, San Francisco Police Chief Greg Suhr has revived his previous call to equip his offers with electronic stun-guns, also called electronic control weapons (ECWs). With similar cases in Chicago, New York and Miami, New America Media’s Paul Kleyman interviewed Aram James, a leading opponent of ECWs about their risks. James, a former public defender in Santa Clara County, south of San Francisco, spent over 25 years in the public defender system. Now in private law practice, he is a consultant and advocate opposing the use of Tasers. Following are excerpts from the interview.

Question: You’ve been critical of arguments that ECWs are a nonlethal or less lethal alternative to guns. What are the myths you’ve raised regarding Tasers?

Aram James: That Tasers save lives is the first myth. That’s a lie. That Tasers can be used as a substitute for deadly force–that’s not true, that’s not accurate. A 2011 Department of Justice (DOJ) report found that over 200 Americans have died after being shocked by Tasers and the advocacy group Truth Not Tasers has documented over 900 deaths from them since 2004.

James: The issue is appropriate use. People have said, “Well, Mr. James, wouldn’t you rather be shot by a Taser than a gun?” And I say, of course, but that’s a red herring. If you have a knife or gun I’m not going to use a Taser to stop you. At that point a police officer needs to have a gun. Alternatively, it’s the most lethal intermediate weapon to use with people who are unarmed. A recent study by the Stanford Criminal Defense Clinic makes it very clear that research on Tasers undercuts arguments for adopting them.

If you talk to law enforcement offices who know Tasers, you don’t take a Taser to a gunfight. Tasers are effective about 70 percent of the time in dart mode, and 60 percent of the time directly applied to the body. So, if I have a knife or a gun in a range close enough to use it against a police officer, you absolutely do not use a Taser. The training is shoot center mass to kill.

Q: So, who are police using ECWs on?

James: A 2014 study from the Nebraska ACLU said that three-quarters of Taser blasts they included were used on vulnerable populations. Over and over again studies have shown that disproportionately Tasers are used on young African Americans, Hispanics, the mentally ill, elders and other groups at high risk for injury. Documented cases there included a nine-year-old boy and a 63-year-old man who was confused.

In 2005, the Houston Chronicle reported that local police officers used Tasers on minorities 87 percent of the time. The paper followed up two years later with an analysis of over 1,000 incidents showing almost all were unarmed. And Houston police used Tasers over 120 times on people with mental illness.

Studies also show that many of the most serious injuries or deaths have occurred when officers inappropriately tased someone repeatedly or with a continuous charge.

Q: How did you get involved with this issue?

James: I first got involved in 2003, with the Coalition for Justice and Accountability in San Jose. It came into existence came shortly after the murder of a mentally-ill San Jose citizen, Cau Bich Tran. Police shot her in her kitchen seconds after they entered and saw her holding what turned out to be a vegetable peeler.

Members of the coalition, including me, initially supported the use of Tasers, believing they’d save lives, having bought the propaganda and the deceptive ad campaign put out by the major manufacturer, Taser International. But we learned that’s simply not true. The company has also lost lawsuits stemming from injuries or deaths when police used Tasers, also believing their claims.

Q: How are Tasers used in police training?

James: Exposure to Taser blasts used to be a mandatory part of ECW training. But the [nonprofit] Police Executive Research Forum came out with a model policy a few years ago saying there’s too much injury to use Tasers in training situations with officers. And the U.S. military has done the same. Their “Electronic Control Weapon Guideline” states, “Agencies should be aware that exposure to ECW application during training could result in injury to personnel and is not recommended.”

So my question is, if law enforcement knows ECWs are too risky to use even in very controlled training circumstance, why the heck would they want to use it on unarmed citizens in uncontrolled street situations? The question I would put to [Police Chief ] Greg Suhr is, are you willing to use these on your own officers in controlled settings to show that they’re safe? If he’s telling the truth, he’s going to say, “No, we’re not going to do that.”

Q: What are appropriate uses of ECWs?

James: None in my view. The alternative, more community police is the key. When police officers are walking the beat and know people in their communities, and their vulnerabilities they’re much less likely to use force in those circumstance.

Community policing, crisis intervention training–a lot of departments have a small percentage of their officers who have been properly trained in crisis interventions. Getting police out of their cars into the communities, walking the beat, riding their bicycles, walking the neighborhood, there’s plenty there to look at in terms of how we can do community policing in a much more effective and constitutional fashion.