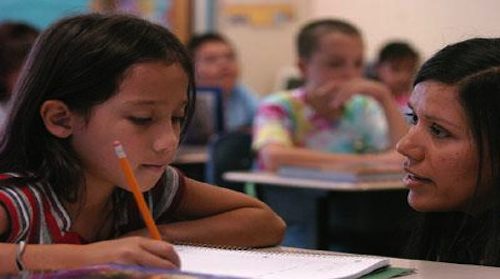 Posted at 03:00h in Arts and Culture, Education by RPadmin 0 Comments 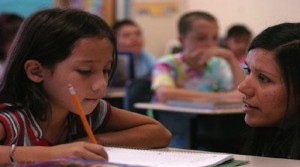 What does it mean to be bilingual? Simply defined, it is the ability to use two languages. Some people can speak two languages well, but are more comfortable reading and writing in one. Or one language is spoken at home, or smaller communities, while another is used in all public interactions including school and work.

Bilingualism in the United States, however, is a perplexing proposition. At best, it is often incorrectly correlated with English as a Second Language (ESL), an educational identification to assist beginners or new immigrants, and a support service available in many school districts. At worst, speaking other languages, besides English, is regarded suspiciously as perpetual foreignness, represented in heavily-accented caricatures.

Bilingualism also carries cognitive implications, perceived as an abnormality that bars total comprehension of the English language. In a 2012 New York Times article, Yudhijit Bhattacharjee explains that bilingual individuals actually are better at complex skills (problem solving, planning, and executing challenging objectives) because they have reconciled linguistic systems. Instead of being distracted, bilinguals have been trained to be more focused than monolinguals even when responding to changing environmental stimuli or when shifting from one type of information input to another.

In 2015, it is inconceivable that we still hold this misconception considering that many countries in Europe and Asia have normalized early learning of English as a second or even as a third language. This dissonance is especially unusual when the American identity is undoubtedly multicultural: a broadening of traditional media and literature to include people of color to the highest rate of intermarriages in history. In 2010, the Pew Research Center reported that about 15% of new marriages were to spouses of another race compared to 7% in 1980.

One can only imagine how different America would look like in the next 30 years.

Today’s American bilinguals and multilinguals continue to communicate in languages as diverse as German and Spanish to Korean and Tagalog as well as native North American languages. According to a 2011 Census Bureau survey, 60.6 million Americans (21%) spoke a language other than English at home.

Even so, many households use English as a primary means of communication, especially as new immigrants become increasingly Americanized. This generational assimilation into American English is no different than what many European immigrants faced in the early 20th century.

The U.S. Education Department has identified 4.4 million English language learners, including limited English speakers.  However, less research has explored fluent English-speaking Americans who continue to use two or more languages throughout adulthood. Often labeled anywhere from 1st to 1.5 to 2nd generation — they were born in the United States or arrived at an early age — and are raised in heritage language households.

Valuing heritage languages should be a national educational agenda. U.S. Secretary of Education Arne Duncan has long argued for the need to respect this type of bilingualism in an increasingly interdependent and competitive global political economy. The expansion of dual-language programs, he advocates, not only prepares English learners, but can motivate all Americans to engage in additional language acquisition.

But how do we overcome this persistent taboo of American bilingualism? As Americans, we need to first relinquish the fear that other languages will erode the function of our most familiar tongue. English will not be erased from domestic or international practice anytime soon. Overwhelming evidence has shown that it remains an influential communications medium: The Language Hoax author John H. McWhorter estimates that it is used by 2 billion people, meaning 1 out of 3 individuals worldwide.

Even with diverse local educational curricula and policies, English will always be used to maintain a cohesive national identity. Simultaneous usage of secondary languages will by no means compromise America’s rich cultural and historical foundation.

Second, we need to move beyond the notion of foreign languages as electives required only in high school. While American English is already privileged in the globalized economy, a competency of other languages offers opportunities to improve on our first language as well.

Certainly the US State Department, the CIA and the international business community could use more Russian, Chinese and Arabic speakers; languages that the Foreign Service Institute has categorized as some of the most difficult to master.

Yet a May 2015 article from the Atlantic finds – from 2008 and 2013 statistics — a significant drop of foreign second language usage from K-12 onwards. While 93% of high schools provided these classes, only 7% of college students continued language studies. Only 1% of American adults today, who studied languages in school, are proficient bilinguals.

Should American bilingualism be an imperative for the years to come? If this concept is to be fully embraced, it must be rethought of as a beneficial educational endeavor. And for the individuals who use other languages regularly as heritage learners, English learners, or foreign language learners, being bilingual should be music to the ears.

Claudia Quach is completing a Masters in English Literature at Northeastern Illinois University. In addition, she holds a master’s degree in education as well as a bachelor’s in journalism.