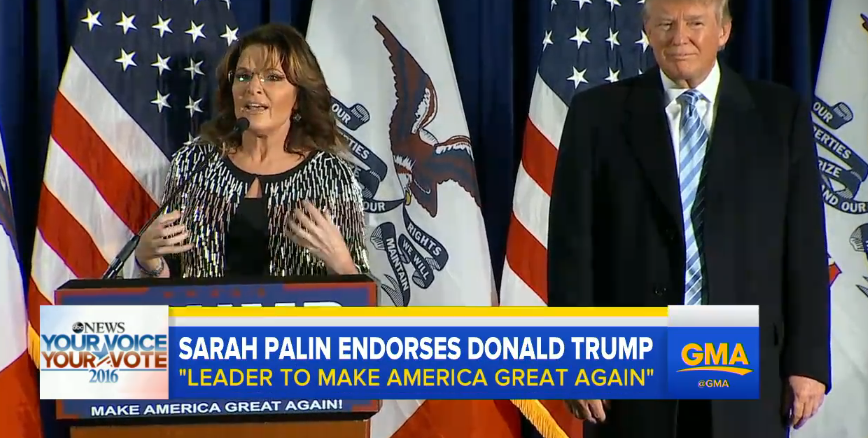 08 Feb Sarah Palin’s Lies Are an Insult to Veterans

Posted at 20:55h in Health, National, Politics by RPadmin 0 Comments 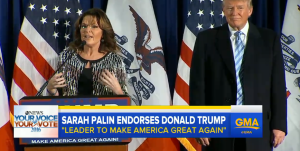 There were untold numbers of American veterans who felt insulted by the Republican presidential campaign’s all-time favorite cover girl, Sarah Palin. Palin, who is no stranger to factless exaggerations, outdid herself last month at a rally for Donald Trump by suggesting that President Obama is at fault for the deficient and delayed health and rehabilitative entitlement services of America’s military defenders.

No one president can be blamed for the catastrophic state of nonfeasance the Department of Veterans Affairs has struggled with for decades.

Currently the VA is striving to enact tried-and-true treatment approaches along with innovative high-tech programs and scientific medical advancements to meet veterans’ needs. President Obama could have done more for veterans during his tenure in the White House. Even if he had, Palin would undoubtedly refuse to acknowledge his contributions.

But the real danger to come out of Palin’s statements might well be the misguided notion that all veterans suffering from Post-Traumatic Stress Disorder (PTSD) are ticking time bombs like her son, Track, likely to explode over the least provocation.

Track Palin, 26, an Iraq war veteran, was arrested at the Palin home for allegedly punching his girlfriend and possessing an assault rifle while intoxicated.

“When my own son is going through what he goes through coming back, I can certainly relate to the families who…feel these ramifications of PTSD,” Sarah Palin said. “And it makes me realize more than ever it is now or never for the sake of America’s finest that we have a commander-in-chief who will respect them.”

In fact, Track Palin’s problem isn’t PTSD. He is a young man who was in serious need of counseling long before he entered the military. According to numerous reports, Track Palin did not spend a single second in combat while deployed.

Trivializing the painful, debilitating damage of PTSD is seen by those who suffer from it as criminally offensive. Veterans of past war excursions suffered the ravages of being “shell shocked,” overwhelmed by “battle fatigue” and stunted by “combat neurosis,” but have never experienced such demeaning sensationalism of their service to advance campaign ratings by political opportunists.

Sarah Palin’s controversial statements were not well received in the veterans’ community. Marine Sgt. Chris Mark called Palin’s comments “disingenuous.” Matt Miller, Chief Policy Officer for the Iraq and Afghanistan Veterans of America, said Palin was “politicizing what veterans go through.” Nate Bethea, a former U.S. Army Infantry Officer, said, “Palin unfairly reinforced stereotypes of veterans who come home broken.” And the widow of a naval commander put it best when she said, “Stolen valor is nothing to be proud of.”

The Department of Veterans Affairs reports that 31 percent of Vietnam veterans are afflicted by PTSD. Thirteen percent of Iraq and Afghanistan veterans have PTSD and that figure is certain to climb as more veterans are discharged to return to civilian life.

Many spouses of veterans suffering from PTSD have spoken out in defense of their loved ones, citing bouts of rage, depression, insomnia and emotional episodes of crying, but the overwhelming majority denied incidents of physical abuse like that with which Track Palin is charged.

The public outrage generated from Sarah Palin’s preposterous assertions seemed to force Trump’s strategists to circle their wagons and come up with a plan that would allow them to remain in good standing with the veterans’ community. Citing journalist Megyn Kelly’s dislike for him and his dislike for her was all the reason Trump needed to refuse to participate in the Republican debate last week. This presented the perfect opportunity to organize his own event and announce that the proceeds would be donated to numerous veterans’ service organizations.

Donald Trump may have perfected the “art of the deal,” but he has a lot of work to do to be a serious contender for residency at 1600 Pennsylvania Avenue. Sarah Palin’s 15 minutes of fame continue to be the shameless personification of a desperate exercise in artificial political patriotism.