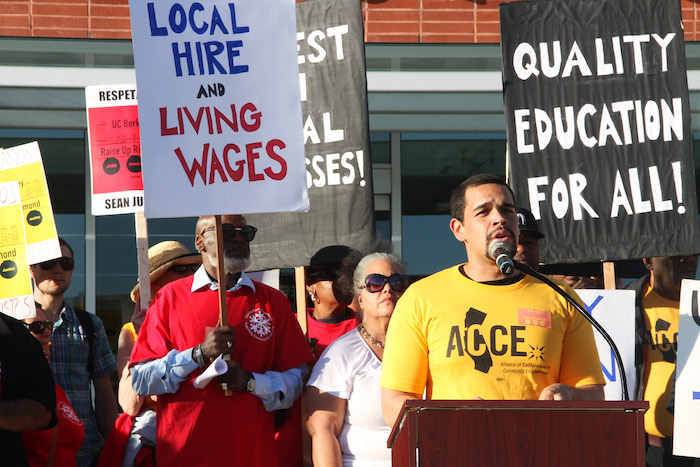 Posted at 05:40h in Business, Economy, News by RPadmin 0 Comments

More than 70 demonstrators gathered on the steps of Richmond City Hall to call for the proposed Berkeley Global Campus at Richmond Bay to benefit the city’s residents. The demonstrators, members of the Raise Up Richmond coalition, showed their support for a recently released set of recommendations that aim to ensure local hiring and fair wages.

Melvin Willis, an organizer with the Alliance of Californians for Community Empowerment, called the proposed UC Berkeley biotech campus “a project that can make or break Richmond.”

The proposed UC Berkeley Global Campus in Richmond has sparked a debate since its announcement in 2013. The 5.5 million square foot campus would be built near Marina Bay off Regatta Boulevard, where the UC Berkeley field station is now located. The construction would be the largest infrastructure project in Richmond since 1940, when the Kaiser Shipyards were built off of what is now Marina Bay.

The Contra Costa Times reported that the global campus would create 2,700 temporary construction jobs and up to 10,000 full time jobs. The proposed multi-billion dollar global campus would be located just a few miles from some of Richmond’s poorest neighborhoods such as the Iron Triangle.

The community recommendations are the result of a yearlong process. A group of Richmond residents, local non-profit directors, community activists and UC Berkeley appointed representatives, known as the Berkeley Global Campus Community Working Group, created a list of conditions that UC Berkeley should comply with in order to ensure a mutual success for the city and university. Included in the community benefits agreement are top priorities such as:

1) UC Berkeley must hire Richmond residents, and all construction laborers must be hired as university employees with a living wage and benefits;

2) Richmond residents must be hired in long-term operational roles of the new campus as well as in construction;

5) UC Berkeley must be involved with the City of Richmond to ensure affordable housing and prevent further displacement of Richmond residents. 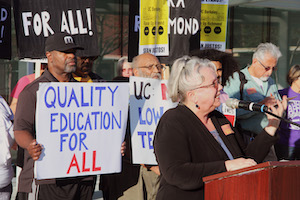 City council member Gayle McLaughlin said that 18.5 percent of the city’s population lives below the poverty line and UC Berkeley has the potential to improve the city if it so chooses.

“We were here first and we will stand for what we believe in,” said McLaughlin at the podium.

Rafael Reyes, Richmond resident and AFCSME (American Federation of State, County and Municipal Employees) Local 3299 Union member, currently works at UC Berkeley. At the rally, Reyes said the university must be held accountable when it comes to fair hiring practices and compensating its workers with a living wage.

While a university employee earns an average of $22 an hour with benefits, workers contracted by third party companies are paid on average $14 an hour with no benefits, Reyes said. Subcontracted workers are not guaranteed work stability and often work 80 hours a week with no overtime compensation, he added.

“Chancellor Dirks’ salary is near $500,000, about half a million, pays no rent or transportation cost, while workers are earning minimum wage,” said Reyes in an interview.

“The UC working group finally pushed forward recommendations that they want to see in the community benefits agreement. Now we are just waiting for the UC to respond to those recommendations and I believe it will be sometime in April,” said  Willis.

The next step is for Chancellor Dirks and UC Berkeley to review the community benefits agreement created by the working group and return with what will likely be a set of compromised conditions.

“Right now it’s just playing a waiting game to see what they are going to say,” said Willis. 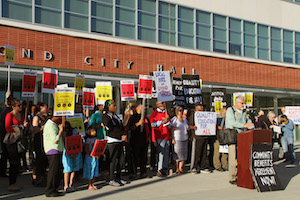