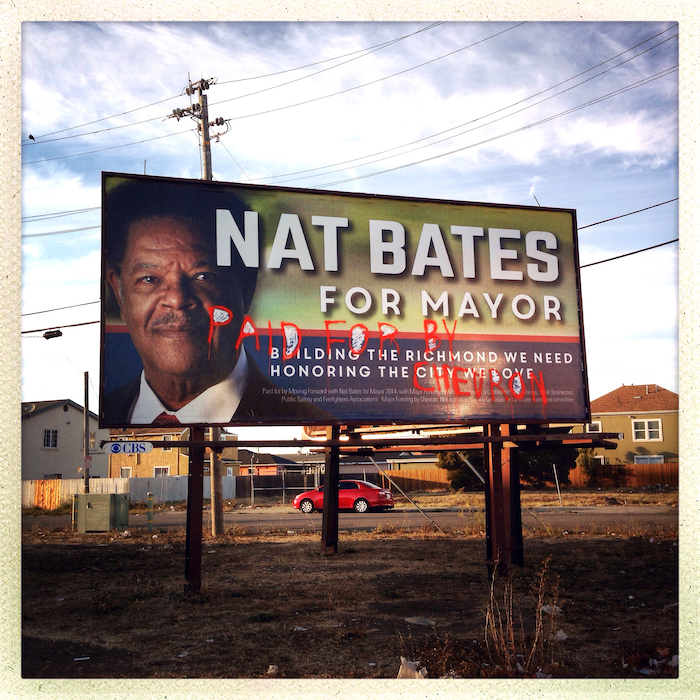 Posted at 19:53h in Arts and Culture, People, Politics by RPadmin 0 Comments

Our next election is less than seven months away. But memories of the last city election—one of Richmond’s most expensive—remain fresh in the minds of many voters. For residents of this refinery town whose recollections are fading, we now have a fascinating 90-minute video history of that campaign. Entitled “Nat Bates for Mayor,” it provides a timely reminder of the stakes involved in a local battle against big money in politics that got national attention.

Most political films (like “The War Room”) are about winners, rather than losers. So how does Nat Bates, the business-backed runner-up in Richmond’s 2014 mayoral race, get top billing in this movie? Bay Area filmmakers Eric Weiss and Bradley Berman were clearly drawn to 84-year old city councilor Nat Bates, because of his deep roots in the African-American community and their sense that his campaign represented a Richmond version of the 1958 Hollywood film “The Last Hurrah.”

In that film, based on Edwin O’Connor’s novel, a rascally Irish-American politician (played by Spencer Tracy) tries to win a big city mayoral race by playing on old ethnic divisions. But the local political landscape has changed, making Tracy’s character, Frank Skeffington, the election loser. Both films offer quite a tutorial in “retail politics.” But Weiss and Berman’s documentary also shows what a modern-day election campaign looks like, in our post-Citizens United era of unlimited political spending by major corporations and the wealthy.

A Korean War veteran and former parole officer, Nat Bates’ mission, after 35 years on the city council, was to liberate his hometown from the anti-Chevron “socialists” in the Richmond Progressive Alliance. “I call them the Richmond Plantation Alliance,” he explains in the film. “They operate from a framework and a philosophy pretty much like a slave owner in the sense that they always know what’s best for you—and not just for the African-American community but for the total city.”

Bates’ actual opponent in Richmond’s three-way race for mayor in 2014 was Tom Butt, a local architect and liberal Democrat who does not belong to the RPA. According to Bates, his longtime adversary on the city council—now our mayor— is just a “slime-ball,” whose “constituency is primarily elitist Caucasians in Point Richmond” (a neighborhood where Bates lives as well, although he fails to mention that on the campaign trail or in the movie).

“Nat Bates for Mayor” captures the defining moment of a campaign indirectly financed by business. Surrounded by friends, family, labor and business supporters at his kick-off rally at Salute, an upscale restaurant in Marina Bay, Bates declares, “Any candidate running for public office who would refuse Chevron’s support is a damn fool!”

No one was asked to make a personal donation at this gala event. Yet Moving Forward, Chevron’s political action committee, was already working, at great cost, on Bates’ behalf. Intent on winning both the mayor’s office and a council majority, Moving Forward found three council candidates who were not “damn fools” either. Chevron’s high-powered political consulting firm, Whitehurst/Mosher in San Francisco, got busy marketing the Bates slate as saviors of the city.

In the film, we see evidence of what “independent spending” totaling more than $3 million can buy. Paid advertising for Bates & Co. pops up all over Richmond. The city’s 43,000 registered voters are deluged with radio and TV messages and glossy direct mailings to their homes. In addition to extolling the virtues of Bates, Moving Forward demonizes RPA candidates, including Richmond’s nationally known Green mayor Gayle McLaughlin, who is termed out and running for city council. As the camera scans Richmond’s new urban forest of billboards—erected with “major funding from Chevron,” as their smaller print discloses—Bates explains in a voiceover how Big Oil kept its legally required distance from lucky folks like himself.

Even Democratic presidential hopeful Bernie Sanders, now the nation’s foremost critic of big money in politics, seems taken aback by the scale of Chevron’s spending on Bates’ behalf. Sanders makes a cameo appearance in the film, shot during his October 2014 visit to Richmond. He endorses Butt for mayor, along with McLaughlin, Eduardo Martinez, and Jovanka Beckles for city council. Then he tells a crowd of their supporters: “You are at ground zero….You beat them here and people will say, ‘They did it in Richmond and we can do it all over America.’”

At Richmond events not far away, Bates assures his backers that “we’re running the strongest campaign I’ve run in my life” and there’s “no way in the world we can lose this election.” Thanks to Butt’s ability to mobilize his longtime base and the RPA’s organizational abilities, Bates is singing a different tune on election night. In the film’s final scene, the crowd is dwindling at his campaign headquarters and the mood is glum. Corky Booze, Bates’ council ally who just lost his own re-election bid, is particularly bitter. “We cannot save the African-American community if they don’t want to save themselves, “ Booze declares.

In his weary post-mortem, Bates acknowledges Butt’s victory and the RPA’s complete sweep. “We ran a clean campaign,” Bates insists. “We did not attack anyone. We kept to the issues…Unfortunately, there might have been some repercussions about too much literature. And that literature really turned off a lot of people and I think what they were saying is, ‘We’re not going to vote for anybody that Chevron is supporting.’…Because everyone that Chevron supported wasn’t successful.”

I recently asked Chevron spokesperson Leah Casey about the company’s plans for this year’s city council races. (Three Richmond incumbents, including Bates, face likely challenges from RPA candidates and other opponents.) Given Chevron’s lack of success in 2014, and the backlash against its “independent” spending then, will Big Oil behave differently now? According to Casey, her employer has not yet “defined how or if we will participate in the local Richmond elections.” She assured me that the company’s electoral participation would be “fully transparent,” whatever form it takes.

Bates has yet to announce his own plans but is expected to seek re-election. He did not respond, by Pulse deadline time, to a request for comment. If rent control in Richmond makes it onto the ballot in November, the California Apartment Association may be this year’s biggest non-Chevron spender, just as the American Beverage Association was four years ago (when a Richmond soda tax was defeated after total 2012 campaign expenditures of $3.7 million by Big Oil and Big Soda). So far, Bates and Butt have been on the same side on rent control—both are opposed to it.

One thing is certain. Without campaign finance reform of the sort advocated by Bernie Sanders in his current presidential campaign, there’ll be no last hurrah for big money in politics, in our city or anywhere else in America, anytime soon.

To watch the trailer or the whole film, go to: www.natbatesformayormovie.com.