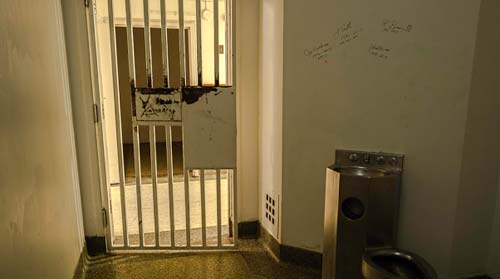 Posted at 19:03h in Politics by RPadmin 0 Comments

Ed. Note: More than a year since California voters passed Prop. 47, studies show that counties across the state are seeing reductions in their prison populations. The law, which allows individuals to reclassify certain non-violent felonies to misdemeanors, also requires that the state reinvest savings from those reduced prison populations into prevention programs. The agency tasked with managing those funds, the Board of State and Community Corrections, meets this week to form a committee that will play a major role in determining who does and does not receive Prop. 47 dollars. Brian Goldstein, the director of Policy and Development for the San Francisco-based Center on Juvenile and Criminal Justice (CJCJ), spoke with NAM about that process and about reports linking the law to recent spikes in crime. His responses have been edtied and trimmed for length.

CJCJ recently released a report about the purported rise in crime as a result of Prop. 47. What were some of the findings?

When realignment was passed [in 2011], we heard in the state capital, and saw sometimes in the media, stories that would associate an uptick in crime and specific instances of crime with realignment, and we’re seeing a similar thing happen with Prop 47. But while very early in its implementation, our study found no correlation between Prop. 47 and the recent increase in crime. We admit that it’s hard given the limited time frame to establish a real trend but we think it’s important nonetheless to provide some context.

What are some of the more pressing questions you have around implementation of Prop. 47?

We are very interested in Prop. 47 and its implementation, given the responsibility that the Board of State and Community Corrections (BSCC) is going to have in allocating 65 percent of the state’s cost savings as a result of a drop in the prison population because of Prop 47. We are very interested in how the BSCC is going to operationalize those cost savings and the types of programs that ultimately will receive funding through the subsequent grant program.

Who is expected to apply for the grants?

As I said, 65 percent of the state cost savings as a result of Prop. 47 will go through the BSCC for a grant program. Public agencies will be the lead applicants for these grants … programs that deal with mental health issues, that deal with housing support, that deal with employment services, so programs that really address the needs of communities across California.

Who will determine who does and does not receive Prop. 47 funding?

What sort of criteria will be used in this selection process?

Assembly Bill 1056, which passed in 2015, gives clear recommendations of the types of individuals who should serve on this Executive Steering Committee. The bill says it should be balanced and should be diverse. The BSCC also held public comment sessions throughout the state, and the overwhelming sentiment was that the agency needed to include community based service providers, formerly incarcerated individuals, and young people. Californians provided powerful public comment about the composition of this Executive Steering Committee and also of the types of programs that should receive funding for the Prop. 47 grant process.

What are some of your concerns around tomorrow’s decision?

Unfortunately the BSCC made a late legal decision that reversed what it had previously told the public. Now, if an individual from a non-governmental agency wants to serve on the Prop. 47 Executive Steering Committee, their agency can’t apply for funding [because of a conflict of interest]. Law enforcement and representatives from public agencies … are allowed to recuse themselves in such cases. To be clear, a public agency has to be the lead applicant for Prop 47 grant funding. But what’s ultimately happening is that community based organizations and leaders across the state are asked to pay a higher price to serve on this Executive Steering Committee … They can’t get the funding if they serve on the committee, and if they are not on the committee then where is the strong community representation? That’s a real concern that we have about this process.

So anyone from a community-based organization who is approved for membership on the Executive Steering Committee will not be receiving Prop. 47 funds?

What happens after April 14?

If the Executive Steering Committee is approved, then it will hold at least one additional public comment session to hear from communities about the types of programs they think should be funded by the Prop. 47 grant process. What follows then will be discussions over the application process and release of the application. The committee will review applications and rate them, and will offer recommendations to the BSCC board, which will ultimately decide who gets funding.