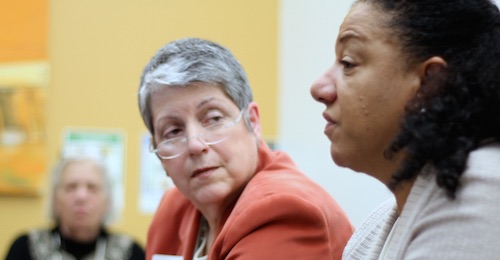 Posted at 23:16h in Education by RPadmin 0 Comments 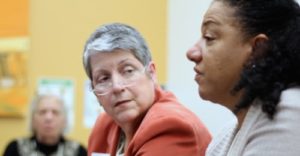 New America Media, News Report, Brenda Payton
OAKLAND, Calif. — The cost of a University of California education, feeling welcomed on campus and whether academic records are strong enough. These were among the concerns raised by a group of 16 African American parents – educators, counselors, community college students – in a candid conversation with UC President Janet Napolitano.

The recent two-hour exchange at Youth UpRising in East Oakland came at the request of the UC head, who has expressed concern over the relatively low numbers of African American students enrolled in the 10 campus UC system. Youth Uprising CEO Olis Simmons co-chaired the exchange and invited the participants.

“Since I took the job in September 2013, I’ve asked how we can make the University of California more representative of the students who graduate from high schools in California,” Napolitano told the group. “What are the real or perceived barriers to expanding enrollment?”

African Americans accounted for 4.7 percent of admitted freshman in 2016, according to admissions data released by the University – slightly higher than 2014 but a dramatic drop since the passage of Prop 209 which barred the use of race in university admissions.

Meanwhile, admissions for underrepresented minorities are up across the board, with Latinos making up 32 percent of the total.

“The primary concerns I hear are how will they finance their education, how can we demystify the application process and will there be a multicultural community to embrace them,” said UC Berkeley alum Judge Trina Thompson.

Thompson, who mentors high school students, related how her own daughter was told by a high school counselor it would be a reach to get into the UC given the enrollment numbers for African American students.

Nedra Ginwright, who provides leadership development for urban youth and is the mother of a freshman at UCLA, pointed out that despite financial aid offerings middle class families often fall through the cracks. She said her family had to take additional work to cover her son’s college expenses.

Parents also said the process of transferring from a community college is arduous.

In her response, Napolitano said a UC education is still about half the cost of a private school and that those whose families have an income of $80,000 or less attend tuition free. She also said more than half of UC students graduate with no debt, if they complete school in four years.

She did concede, however, the UC needs to do more individualized work with families to help them navigate the financial challenges.

But there was a more general and intangible concern that was a recurring theme of the evening. Would African American students feel welcome and supported on campuses with so few students like them?

“I had the perception that (my son’s) admission was an unattainable dream,” Ginwright said. “And I still have the sense, is he really supposed to be there?”

Natalie Figueroa said when she took her oldest child, a senior at Oakland Tech, on a tour of the UC Berkeley campus, an African American student approached them. “She said she could give us the lowdown about what it’s really like and it would’t be pretty. That raised concerns,” Figueroa said.

“We saw Akintunde Ahmad, the Oakland Tech senior who had a 5-point grade average and was all over the national news, he was rejected by UC. He went to Yale,” said Andrea Phillips, a counselor at the Contra Costa Community College District and a UC Berkeley graduate.

In spite of their concerns, participants made it clear they value the UC system and want to do what they can to make it more attractive and accessible to African American students.

“I want students to have the option of UC. It was so great for me,” said Millicent Cox, a UCLA graduate. “It didn’t seem out of reach or unaffordable.”

Another parent said people would not hesitate to represent the UC system in a positive light if the admission process and student experiences reflected their goals. “We all think it’s a great treasure and resource,” she said.

Macheo Payne, an educator and UC Berkeley alum, emphasized the importance of staff and faculty who support African American students. He said Jessica Brown, in the admissions office when he attended, was called the Harriet Tubman of UC because she brought so many African-American students in.

“If you don’t have the African American staff to receive them and make them feel warm and welcome, then it doesn’t matter if they enroll, they won’t stay,” he said.

Jeanne Wilson, the dean of special programs and services at Chabot College, said while African American students make up just 10 percent of the student population there, they congregate around the offices of three African American counselors.

Several participants urged Napolitano to ask African American students about their experiences and to ask those who were admitted but declined to attend what influenced their decision.

Invite them to apply. Invite Black Student Unions from high schools to attend a youth empowerment weekend. Increase dialogue with community college administrators. Start talking to students when they are in middle and elementary school. Make more use of African American graduates to recruit new students.

Brianna Rogers, a re-entry student with plans to transfer from Berkeley City College to UC Berkeley, recommended professional development for staff and faculty. “Bring the professors into 2016,” she said. “Have them use more diverse literature.”

“I always say a meeting is not a result,” Napolitano said as the dinner meeting drew to a close. “This has been an effective exchange of information that can inform change.”

For Kimm Blackwell, a counselor at Berkeley City College, change is the operative word.

“I see all that the schools have to offer and I want to be a part of changing the experiences to make it better,” said Blackwell. “UC needs to be an option.”