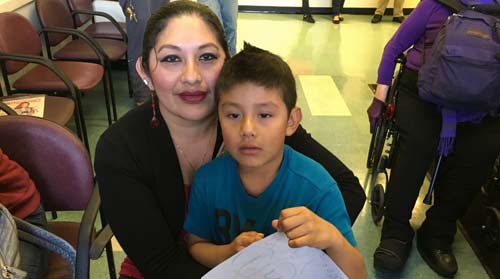 Posted at 16:58h in Health, Immigration by RPadmin 0 Comments 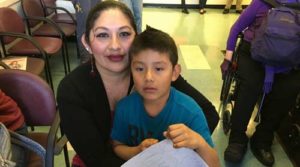 Photo:Teresa Lopez (above) shown with on her her U.S.-born children, also said she hopes to enroll her Mexico-born daughter, age 15, into the new Health For All Kids Program. (Photo curtesy Jesse Melgar)

SAN FRANCISCO–Kicking off his statewide tour to promote California’s Health for All Kids program, the new law’s author, State Sen. Ricardo Lara, D-Bell Gardens, said undocumented parents should set their fears aside and enroll their children in the program. The legislation would expand the state’s health insurance program for low-income people.

“There’s a misconception among immigrants,” Lara said, that asking for government help could land them in trouble. He made this observation during a May 12 media presentation at San Francisco’s Mission Neighborhood Health Center.

Mindful of this, the Health for All Kids program – set to launch May 16 — was designed so children who currently have limited access to health care through the Emergency Medi-Cal, Healthy San Francisco or Healthy Kids programs would “seamlessly transition” into full-scope Medi-Cal (California’s version of Medicaid), said Lara.

An estimated 170,000 undocumented children are eligible to enroll in the state-funded program, expected to cost $40 million in the first year of its operation, and $137 million annually “in perpetuity,” Lara said.

Lara drew on his experience growing up in the United States as the child of poor undocumented immigrants from Mexico to emphasize why it’s important to have children enrolled in health insurance.

“Children shouldn’t have to worry about how their parents are going to pay for a broken arm or for a dentist,” the lawmaker said.

Leno, who chairs the Senate Budget Committee, said the importance of the Health For All Kids program can not be overemphasized because illnesses make no distinction between documented and undocumented people.

“Our bodies, viruses, bacteria don’t know what our immigration status is,” Leno said. He noted that dental problems alone results in around 500,000 children in California missing school each year.

He also observed, “Without a high school diploma, a child is more likely to find his way into the criminal justice system.”

‘Get a Clue, Donald Trump’

Leno’s elicited laughter when he quipped, “Get a clue, Donald Trump.” He was referring to the Republican presidential presumptive GOP nominee’s vow to upend the Affordable Care Act (ACA) should he become president.

Undocumented Bay Area resident Teresa Lopez, a mother of four children, said she would be relieved to see her Mexico-born daughter, Litzy, age 15, enroll in the full-scope Medi-Cal program and enjoy accessing health care the way her two U.S.-born children currently do.

“Having to make copayments for every visit, and for medications is taking a toll on my family,” said Lopez, speaking in Spanish, through an interpreter. “It will be nice when all my children have the same kind of health care benefits.”

Lara noted earlier this week that the California Department of Health Care Services, which operates Medi-Cal, has said it is ready for the influx of thousands of children when the Health For All Kids program begins next week.

Lara is hopeful that Gov. Jerry Brown will sign his second bill, SB 10, which is currently making its way through the Legislature. It would allow the state’s undocumented adults to buy unsubsidized health insurance on Covered California, the online marketplace set up under ACA, with their own money. More than 2 million people currently have no access to health care, Lara said.

California has sought a federal waiver to allow its undocumented population to purchase health insurance on the marketplace.

“We hope we get the waiver before the administration in Washington changes,” Lara said, suggesting that the next U.S. president might either dismantle ACA or make drastic changes to it.

In the wake of the new Health For All Kids program, Lara was asked how the state could cope with the large influx of new Medi-Cal enrollees when there is already a shortage of doctors and dentists in the Medi-Cal network.

He said that said he hopes lawmakers would make the program more attractive to health care providers by increasing reimbursement rates, currently among the lowest in the nation.

“We are going to keep pushing for this,” Lara said.