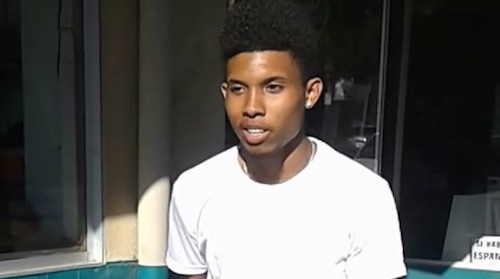 Posted at 23:21h in California, Police by RPadmin 0 Comments 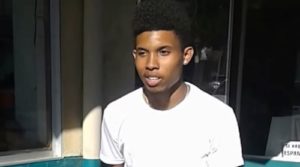 MERCED, Calif. – A video surfaced in early May showing two police officers in the city of Merced, in California’s Central Valley, tackling a young black man who was stopped for riding his bike on the street.

While local media has paid scant attention to the incident, the video has garnered close to 300,000 views on social media, a sign of intense public interest in police relations with low-income communities of color.

“I don’t know where to begin. There are so many problems,” said Victoria Castillo, a community advocate and an organizer with the non-profit Merced Organizing Project. “We do have quite a few problem officers, heavily in the downtown area where this incident took place.”

In the video, 19-year-old Jordan Lloyd is seen arguing with an officer from Merced PD identified by her last name, Martinez. After refusing to produce his ID, Lloyd demands to know why he is being detained and when Martinez does not give an answer he tries to leave the scene. It’s at this point that Martinez physically restrains Lloyd, who resists her attempts to handcuff him. Seconds later another officer, identified as Gonzalez, appears on camera thrusting his hands around Lloyd’s neck and forcing him to the ground.

Merced PD did not respond to a request for comment. Merced County Public Defender Armando Lupe also said he could not comment as he is defending Lloyd.

A press release from the police department notes that Lloyd was booked and charged with resisting arrest and riding his bicycle on the sidewalk. His companion, 18-year-old Bryce Snell, was arrested while videotaping the incident and charged with obstruction. In the video, Snell is seen being tackled by an unseen officer later identified by his last name, Avery.

“There are those who say [Lloyd] deserved it, but community members who are more likely to be impacted by incidents like this are outraged,” said Castillo, adding that many are also “happy that someone was able to film it because there is actually proof.”

Crime rates in Merced regularly exceed state averages. But Castillo and others say the department has taken a blanket approach to dealing with Merced’s low-income communities of color by treating everyone as suspect.

“It’s like they are afraid of us and if anything we are all afraid of them,” says Earl Brewer, 19.

Keyshawn Mays, 18, echoes the frustration. “Every time I come outside to chill out in front of the house I’m approached and asked for my name and ID. I don’t understand why,” he says. “I don’t even have a record. I’m literally just chilling on my front porch.”

Both Brewer and Mays defend Lloyd, the young man in the video. “They didn’t have to grab him like that,” says Brewer. “In the video it shows that he stops after [Officer Martinez] puts the handcuffs on him. And out of nowhere you see another police [officer] come and grab him by the throat. That was unnecessary.”

Mays says a lot of young people in Merced feel safer riding their bikes on the sidewalk, even though it is a violation under California law.

“If they’re going to give tickets for that, then they might as well start giving tickets to people who are walking on the sidewalk because there are no bike lanes on Main Street,” he says, “so why should [Lloyd] have to ride his bike on the street?”

Merced police have been cracking down on infractions like bikes on city sidewalks through its Disruptive Area Response Team (DART), which also targets activities including prostitution and narcotics sales.

The police department’s Gang Violence Suppression Unit has been active in responding to shootings and other incidents of gang-related violence, including a sweep in April of the nearby community of Delhi, where authorities say a spate of six daytime shootings in the span of a week terrorized local homes and schools.

Castillo says Merced PD relies on a Five Point Gang Injunction criteria used by police in Los Angeles. That means individuals can be “placed on a database without their knowledge for such things as where they live and if they are low-income.”

The injunction program in Los Angeles became the subject of a court battle in 2011 when a district court judge found the city violated due process rights of those subject to gang injunctions. Theresulting decision in that case forced the city to put $1.25 million per year toward job training and other prevention services.

Castillo also says Merced PD has refused to take steps toward reform that she believes would help to rebuild relations with residents. That includes turning down offers to participate in a free statewide training program to address implicit bias launched last year by State Attorney General Kamala Harris, who is now running for Congress.

The agency has been working to increase the number of officers on staff. Local youth advocates say part of the funding for the increase should have gone instead to support services and other programs for young people who account for almost half of all residents.

Merced has one of the state’s highest rates of disconnected youth, defined as young people between the ages of 16 and 19 who are neither in school or working, according to Kidsdata.org. Some 43 percent of youth in the city live below the poverty line.

For Castillo, the video fits into a larger pattern of police abuse. Two years ago she spoke at a Board of Supervisors meeting during which she criticized police treatment of local communities. She later found herself the subject of a probe by law enforcement authorities that the local paper, Merced Sun Star later reported was an illegal probe.

“There is a lot of fear,” she says. “People in poorer communities want to put their heads down. They fear retaliation.”

As for the scenes on the video, she says, “This has been going on for a long time. It’s nothing new.”