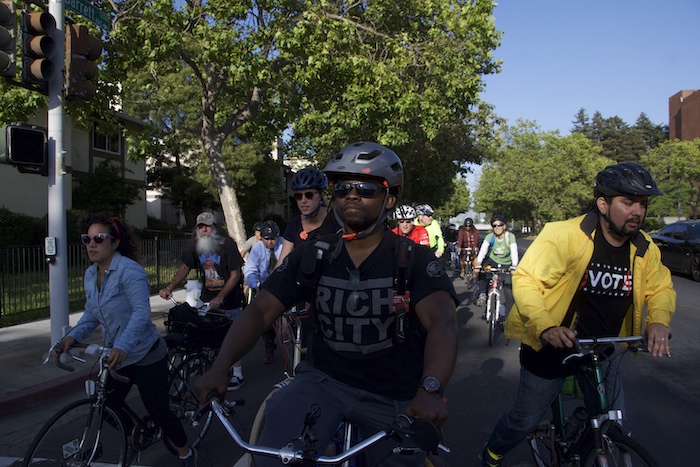 05 Jun Ride of Silence Commemorates Those Killed in Richmond

Posted at 23:55h in Youth by RPadmin 0 Comments

About 40 people took part in the 5th annual Ride of Silence in Richmond last month, part of a national bike ride to bring attention to cyclists maimed or killed while riding on urban streets. But in Richmond, the ride took on a bigger meaning, commemorating all those who had been killed in the city.

“For me, the Ride of Silence evolved,” said Najari Smith, founder and executive director of the local bike shop Rich City Rides, which organized the event. Cyclists biked from Rich City Rides to City Hall, where speakers discussed what the ride means for residents of Richmond. 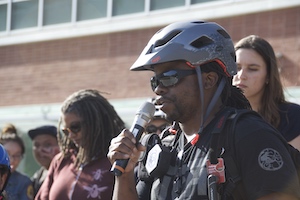 “It started out for road safety for cyclists,” explained Smith. “Nationally, it doesn’t concentrate on pedestrians, violence and murders. But I feel like everything is connected, so I wanted to address all of these things together in this ride.”

Smith was awarded a Mayoral Certificate of Excellence, signed by the mayor and presented by Alex Knox of the Mayor’s Office. The certificate was “in recognition of the Fifth Annual Rich City Rides Ride of Silence which reflects on the pain and loss experienced by cyclists and other victims of violence in Richmond.”

Cynthia Amour, advocacy manager for Bike East Bay, talked about one of their members who had a tragic accident while cycling on the streets of Berkeley.

“You never think when you get on your bike, ‘Oh, I might get hit or run over by a car.’ That’s not the thought that goes through your head when you put your helmet on. You don’t expect that, even when you get in a car or on the bus, but it happens,” said Amour.

Richmond resident Donnell Jones of Cisco talked about violence and murders in Richmond.

After a prayer led by Jones, cyclists visited locations where young people had been murdered in acts of violence. Leading the ride was Smith, who led a moment of silence at each stop to honor the lives of 15-year-old Malik Barnes, 26-year-old Reginald Atkinson and 14-year-old Xavier McClanahan. Doria Robinson from Urban Tilth spoke about domestic violence and led a moment of silence to honor the life of 16-year-old Mauriana Seymore.

At the end of the ride, Amani Skinner, 16, explained why she had decided to participate in this year’s ride. “I’ve had close calls when riding my bike” she said, “so I wanted to give respect to those who did pass away while riding on their bike and those who passed away due to violence.” 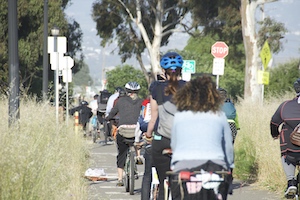