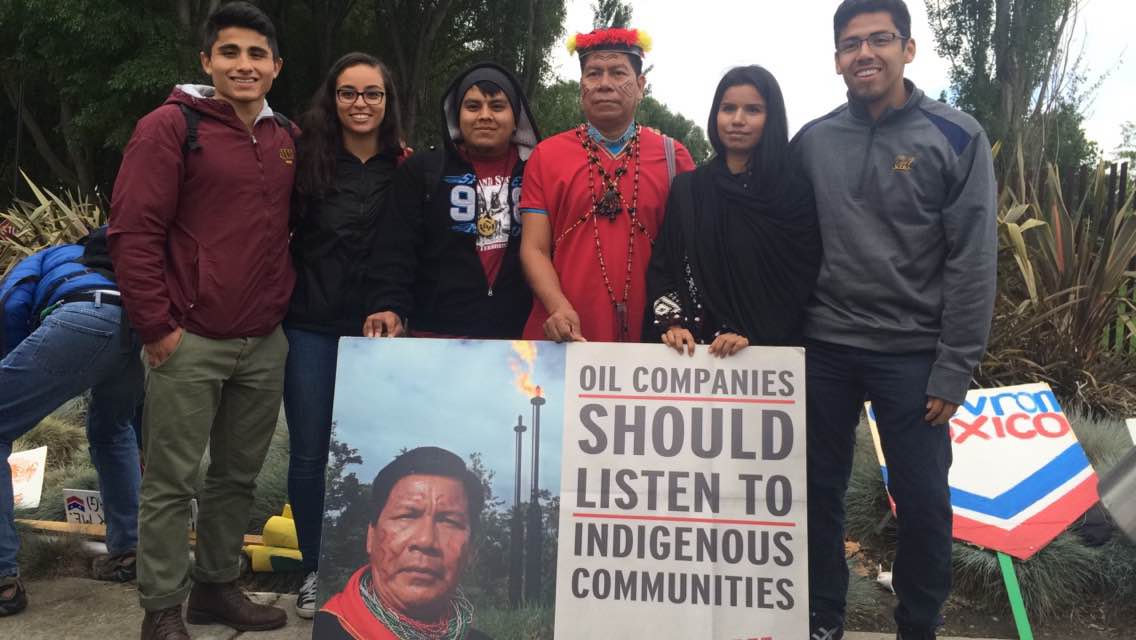 Posted at 08:06h in Environment, International Affairs by RPadmin 1 Comment 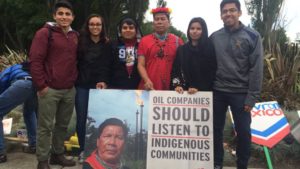 Above: UC Berkeley students in solidarity with indigenous leaders from Ecuador protesting outside of the Chevron Shareholder meeting in San Ramon.

It was a gloomy Wednesday morning when I met up with about 20 people at a Peet’s Coffee in San Ramon. I had been asked to be one of the speakers at a protest outside the annual Chevron shareholder meeting on May 25. The purpose of the demonstration was to share our personal experiences with environmental and health problems that have been caused by the Chevron refineries in our backyard.

But we weren’t just there to raise awareness among residents of San Ramon. We were also calling attention to the damage Chevron refineries were doing across North and South America, and demanding a more sustainable use of energy that doesn’t put lives or sacred lands at risk.

Representatives of Amazon Watch, Richmond Progressive Alliance, Sunflower Alliance, Idle No More SF Bay, Solar City, and a few UC Berkeley students marched together to speak out about the damage Chevron refineries were doing to our communities.

As we approached the sidewalk, we saw cop cars and police officers awaiting us. There was also a painted yellow line on the cement labeled “PROPERTY LINE” that prevented us from blockading the gates.

Along the border of the corporate headquarters, we placed three bottles on the ground, each filled with water collected from a local water source in the northern Ecuadorean Amazon that was contaminated by Texaco (now Chevron) deliberately dumping toxic foundation waters in the rainforest.

“I am standing here because I know what it feels like to be forced out of your own home, and I want to fight alongside with others who want to prevent more displacement from happening,” said 22-year-old UC Berkeley student Vanessa Villanueva, who was holding a “Chevron Toxico” sign.

“Since the 1970s, big corporations like Chevron and Exxon have known about the climate issues and hidden it, ” said Leila Salazar-Lopez, executive director of Amazon Watch.

ExxonMobil reportedly knew about climate change as early as 1977 – 11 years before it became a public issue, according to a 2015 investigative series by InsideClimate News. Despite this knowledge, the company spent decades hiding that information from the public.

Since 1996, Amazon Watch has helped defend and protect the rights of the rainforest and territories of indigenous people against major climate change. According to Amazon Watch, about 400 remote tribal members depend on the Amazon for physical and cultural survival. Amazon Watch has supported indigenous allies to take a stand against fossil fuel industries, and fight to keep oil in the ground and to keep their natural resources safe.

Janet Johnson of Richmond Progressive Alliance said she joined the action because she wanted to let San Ramon residents know that Chevron was responsible for poisoning life and its resources.

“It is a worthwhile feeling to be on the frontline, and it’s a task to stop the climate emergency. I am a Richmond resident so Chevron is in my blood,” she said.

Richmond Progressive Alliance, together with Sunflower Alliance (sunflower-alliance.org), advocates for a reduction in pollution by Chevron and the need for the city of Richmond to transition to more sustainable energy.

When it was my turn to speak on the bullhorn, I talked about how the presence of Chevron in Richmond has impacted my life – and the politics of Richmond.

I remember the massive fire at the Chevron refinery on August 6, 2012, when about 15,000 Richmond residents had to go to the hospital for treatment after breathing in the toxic smoke.

Two years later, Chevron tried to defeat the candidates who were against the fossil fuel industry like Eduardo Martinez, Gayle McLaughlin and Jovanka Beckles. The oil giant bought up billboards across Richmond, advertising Nat Bates, Donna Powers, and Charles Ramsey who were supporters of Chevron. But the money they poured into advertising didn’t persuade strong-willed community members and all of the Chevron-friendly candidates ended up losing the election.

As an indigenous woman, I spoke to represent Idle No More SF Bay, an indigenous-led group that formed in 2014 and helps coordinate the Refinery Healing Walks (Refineryhealingwalks.com) along the East Bay from 2014 to 2017.

I’ve also signed onto a treaty called the Indigenous Women of America—Defenders of Mother Earth Treaty (ienearth.org). The treaty was first signed on September 27, 2015 in New York, by seven indigenous women from North and South America. I shared the commitments that we have decided to make to help raise awareness about the rights of Mother Earth. One of the commitments is to have a ceremony every new moon and gather with those who want the same sustainable and fossil-free lifestyle for the next generations to come. Another is to be part of a non-violent direct action on every solstice and equinox at any fossil fuel gas station or refinery meeting in order to “disrupt business as usual” and to raise awareness about the climate issues.

For the past six years, environmentalist groups like Amazon Watch have attended Chevron’s shareholder meetings to bring awareness to the fact that oil companies like Chevron and Texaco continue to devastate rainforests and indigenous peoples, forcibly removing them from their own territory.

“It is our right to defend Mother Earth,” said Luis Lopez, 23. A UC Berkeley student, Lopez said that when he was a child, mining companies forced his family to leave Oaxaca, Mexico in what he called a “cultural genocide.”

While we were standing outside, three members of the Amazon Watch were selected to go inside the meeting to talk to John Watson, executive officer of Chevron. When the meeting was adjourned, they reported back to us that Watson continued to deny that the human race and the fossil fuel industries were the cause of climate change.

For Watson to admit that would have been to acknowledge that the oil company is responsible for protecting more than its shareholders’ stock portfolios.

But for those of us who live with an oil refinery in our backyard, who see the connections between what is taking place here and the deforestation and displacement happening in other parts of the world, and the effect this industry has on climate change and the health of our entire planet, it’s pretty clear what we need to do.

For me, the action was one of many steps I’m taking to speak up for communities that should have a say in the air they breathe. I decided to speak out because I think it is important to stand up against companies that are negatively affecting our way of life, Mother Earth, and future generations. I want to be the change for this generation, especially here in Richmond.