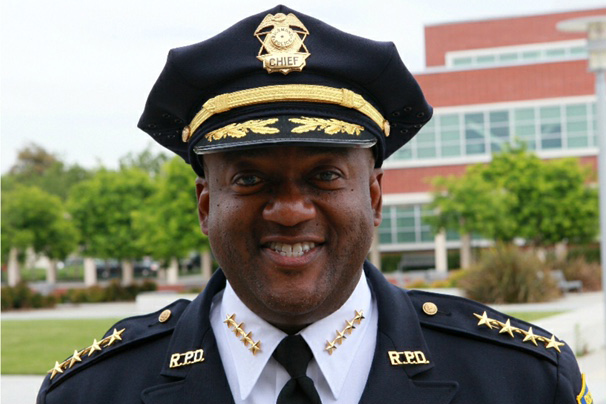 Posted at 19:31h in People, Police by RPadmin 0 Comments 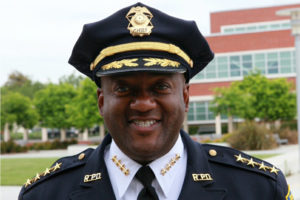 Editors Note: Last week, in response to the shooting of five officers in Dallas by a sniper, Menbere Akilu and her staff at Saluté Ristorante organized a surprise lunch for Richmond police officers. The event, designed to show support for the men and women of the department, included a meal of pasta, chicken, fish and dessert at the police station. During the lunch, Richmond Pulse sat down with new Richmond Police Chief Allwyn Brown to discuss how the police department is responding to national tensions and keeping lines of communication open in Richmond, including making the Office of Professional Accountability more accessible to residents.

Richmond Pulse: What does a show of support like this from Menbere and Saluté mean to you and your officers?

Allwyn Brown: We are moved by this really cool gesture of support and love. As Menbe [Akilu] said, policing can often be a pretty thankless, grinding job with not very many opportunities for recognition for the rigors of the work and just the toll it takes on the folks who step up to do it. Policing is a job where you have the opportunity to touch lives and to make a positive difference in the lives of people every day. I’m really happy, especially moved by this, because I think it’s evidence of what we’ve worked so hard to build and will continue to build on, which is this idea that community safety really is everybody’s responsibility.

RP: A lot folks in Richmond continue showing support for RPD while there are others that view police in general as the problem. How are your officers able to put all that aside and do their job, which is to serve and protect the community?

AB: Well, I think our folks put professionalism first, and just as an organization, we have high priorities on up-to-date and recurrent training that matters, relationship building which is the core of our policing system, modern tools and equipment and technology, so that we can work as smart as we can and as efficient as we can.

We pay attention and we understand the national climate and the dialogue and the discussion. But I think what’s most important is that no matter what perspective you have, is that if you have an open mind and you’re open to dialogue and back-and-forth communication, that’s the thing that expands perspectives.
The truth is that policing in America has more bad history than good. Because we are an arm of the government, I think we have an obligation to acknowledge that when and where we can. And I think sometimes when it comes to policing communities of color, that’s especially true. But that acknowledgement can shape and change perspectives on both sides of the exchange, so that hopefully those interactions between police and the community, no matter how they turn out, are always more positive, and in here, we aim to practice good, effective, constitutional policing.

RP: The narrative around police and the community in Richmond is a bit different than it is in other Bay Area cities and throughout the country. What makes Richmond different?

AB: What makes Richmond different first of all are the people. When we hire and screen for police officers, we have a high priority on diversity. And diversity is not just about race or ethnicity. It’s also about how you think, what you believe, where you’re from, what your mix of experiences are or are not, military, nonmilitary. When we bring those people together, we have a mindset of inclusion. What gives diversity the real power, right? That’s when you tap the talents of every member of your collective and you put those to use to do good stuff to work together toward common goals. That’s, I think, where some of the magic lies. Of course, also, it’s a mix of strong, relevant policies, accountability, good training, modern tools, checks and balances. And we’re constantly changing.

RP: What is an example of a recent change you’ve made?

AB: One of our newest features is we’ve evolved our professional standards unit, our internal affairs process, to an office we call the Office of Professional Accountability. We exchanged out the sworn manager that used to manage that function. We did a national search. We hired a civilian manager who is a lawyer, and then we moved the Office of Professional Accountability from police headquarters to Civic Center Plaza at City Hall in an attempt to be more forward-facing to the public. We hired our manager just in March of this year, so it’s kind of a new feature and it’s just one of the ways that we try to keep pace and evolve as the community we serve continues to morph.

RP: What are some of the ways that people can support our officers here in Richmond?

AB: Policing is a tough job, and I think just being involved, being connected, reporting suspicious activity if you see it, looking out for your neighbors and just doing your part to keep neighborhoods and communities safer is the most important thing.

Policing, when it works the best, really does protect democracy. In a democracy, everybody has rights but those rights are balanced with responsibilities. Part of that responsibility – and this is a message that I give to young people when I have the opportunity to talk to young people about what their rights are – is to submit to the lawful authority of a police officer. At least then you’re having a greater stake in the outcome of that exchange, even if it’s something you don’t think is right or you don’t believe in. Because what happens is that by law, every police department has to have a process to investigate a complaint. You can complain. So, I reduce that idea to one simple message. Comply now, complain later. Get it all sorted out.