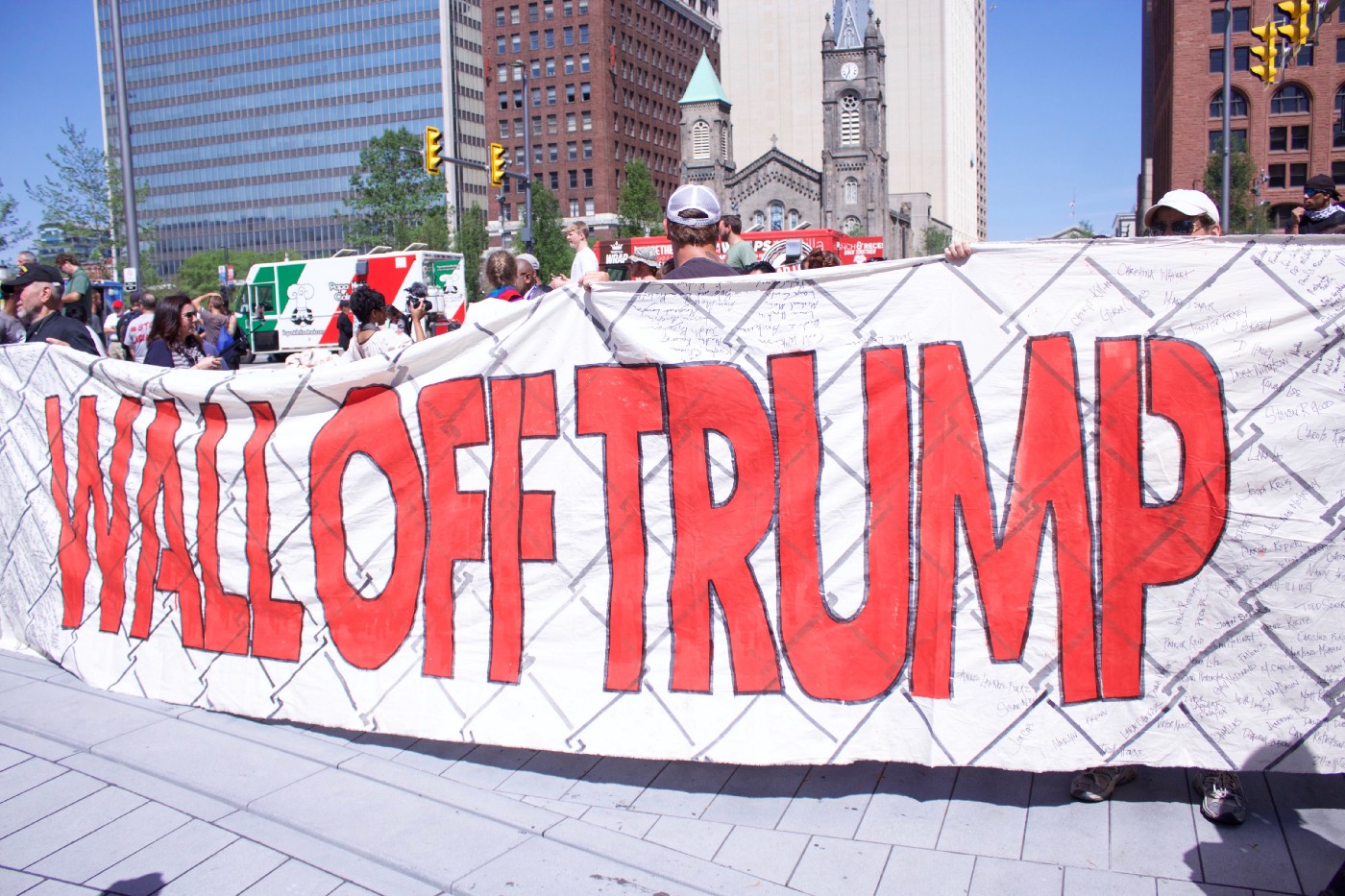 22 Jul Activists Give Trump his Wall in Cleveland

Posted at 04:25h in National by RPadmin 0 Comments 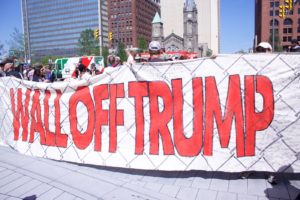 Story and photos by Randy Villegas

CLEVELAND, Ohio — “The walls that they build, to keep us apart will never be as strong as the walls in our hearts” activists sang. Hundreds of demonstrators from across the nation gathered in front of the Republican National Convention in an attempt to “wall off Trump.”

Organized by Mijente a Chicago based organizing group, the group illustrated their solidarity with the undocumented community and inclusion for all, by creating several large banners meant to mimic the wall Trump promises to build on the U.S. border. Several protesters also linked hands together to form a human fence in an attempt to block Donald Trump from entering the RNC.

One demonstrator said “We are here to wall off Trump’s hatred and divisiveness that continues to spew racism and islamophobia, and we’re here to say that we are for diversity”.

This passionate movement featured protesters of all ages, ethnicities, and had a very diverse group of supporters. Tania Unzueta, lead organizer of the demonstration, said “we have Iraq veterans, women, undocumented folks holding up banners and standing in solidarity. Trump has been talking about building up walls around our communities, so we flipped that around and said we are going to build a wall around the Republican National Convention.”

I visited Mijente earlier in the week when they were still constructing the wall. The group met in a secret remote location where they spent countless hours constructing their project in a hot room.

The day of the protest police blockaded the RNC entrance as did the protesters chanting about immigration. The peaceful protest cooperated with police and there was no violence that broke out.

Coming from Kern County where immigrants play such a vital role in our workforce, from agriculture, to oil, and education, I was impressed by Mijente. Their passion for inclusion and unity were on display during their protest. Seeing elderly people, undocumented people, young people, white people, black people, brown people, Asian people, men and women of all ages gathered to stand in solidarity with the undocumented community gave me hope.

Later in the day, a few anti-immigrant supporters were verbally attacking a man with a sign, telling him that he needed to go back to his country. Although I was afraid, I challenged their group and asked them how they could support such a policy of deportation. When I explained to him that millions of people have virtually no path to obtain legal citizenship because of quota laws and a broken system, the anti-immigration person said, “well I had a friend from Puerto Rico who came over and did it the legal way!”

He was quite surprised and shocked when I informed him that Puerto Rico is a U.S. territory and so those born in Puerto Rico are U.S. citizens.

I was angry but also sad for the ignorance of this man. Many of those who are anti-immigrant don’t understand the struggles of the undocumented community or immigrant families, and the process they must go through to even obtain a green card.

As I was debating, an older gentlemen interrupted us and he trembled as he shook my hand and said, “Thank you so much for standing up for us. I’m an immigrant from Croatia. I have been here 6 years with a green card, and I can’t get my citizenship”. Although I could tell he was emotional and a bit afraid, I was reminded of the Wall Off Trump protesters that gathered earlier that day shouting, “Undocumented and Unafraid! No Papers, No Fear!”

That is how we should all live. Without fear. Without persecution for your age, your ethnicity, whether you are documented or not, or the people you love. That is what freedom is, and that is what this great country was founded upon. So the next time you see someone spewing hate, dividing people, or saying that a person shouldn’t be included, do not be afraid to stand up for what’s right. Go stand for unity in our community, for inclusion in our system. What better way to do it, then to lift up your voice through the power of your vota.