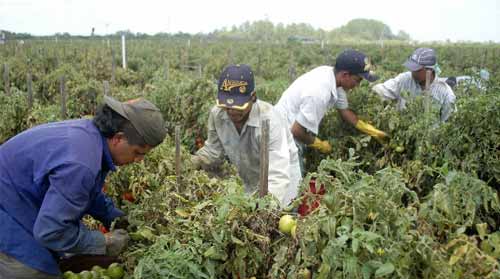 Posted at 20:43h in California by RPadmin 0 Comments

After gathering the necessary 21 votes needed for it to pass, the bill barely cleared the Senate floor last Monday afternoon. Fourteen senators, including local Senators Andy Vidak (14th District) and Jean Fuller (16th District), voted against the bill. Now, it is up to the California State Assembly to decide on the future of the agricultural industry in California.

On Thursday, Speaker Anthony Rendon adjourned the Assembly until today, giving the bill only three days to be passed by the Assembly before the August 31 deadline.

The delay came as a surprise to farmworkers, many of whom traveled to Sacramento from Kern County to lobby in favor of the bill. “We were told that this bill would be voted on Thursday, and we knew we had the necessary votes for it to pass, so these farmworkers took a day off without pay and piled into buses and came to Sacramento, only to be let down,” said Marc Grossman of the United Farm Workers organization, one of the biggest supporters of AB 1066, founded by labor rights leaders Cesar Chavez and Dolores Huerta.

After the abrupt adjournment, Grossman and many farmworkers said they followed the Assembly Speaker Rendon from the Assembly floor all the way to his office to meet with him to voice their concerns and see what could be done to get AB 1066 passed. “Speaker Rendon told us that he will do everything in his ability to assist us in getting AB 1066 through the Assembly and guaranteed to us that the bill would be voted upon on Monday. Though it is costly, almost every farmworker said they would once again sacrifice a full day’s pay [to come back to Sacramento on Monday] to urge the Assembly to pass this necessary bill,” Grossman said.

Farmworkers are excluded from federal overtime provisions created by the Fair Labor Act of 1938 that grants employees overtime pay after working 40 hours in a single workweek. They currently receive overtime only after working more than 10 hours per day.

“This can no longer be justified or tolerated”, said Grossman. “It is outrageous that California’s farmworkers perform some of the hardest work; work that helps to feed the nation. Yet, most of them are living in poverty.”

Under AB 1066, by the year 2019, farm owners would be required to pay time and-a-half after employees work 9.5 hours per day. The number of hours would be lowered by 30 minutes every year before eventually requiring them to pay overtime after an eight-hour workday by 2022, the same year the newly passed $15 minimum wage will take effect. It would also introduce a 40-hour workweek for farmworkers, a standard for workers in other industries.

However, many leaders in the agriculture industry warn that though they understand the necessity to ensure farmworkers are treated fairly, this bill could end up causing more harm than good.

Beatris Sanders, executive director of the Kern County Farm Bureau, says that the passage of the bill will end up hurting farm owners and farmworkers alike.

“Farmers and their employees have very real concerns that working hours will be reduced if AB 1066 becomes law. Due to higher costs, farmers will be forced to limit their current workers’ hours and hire additional workers to make up the difference. The passage of this bill is expected to result in at least a one-third reduction in the income of many farmworkers during peak harvest season. California’s farmers value and respect their employees and do not want to see their livelihoods impacted,” Sanders said.

This isn’t the first time the Assembly will discuss the issue of overtime for farmworkers. In late June, the Assembly deliberated a similar bill, AB 2757, also authored by Assemblymember Gonzalez, proposing similar requirements of overtime pay for farmworkers. After hours of fiery debate, the bill was killed in a very close 38-35 vote, falling only 3 votes short of the 41-vote majority necessary for it to pass, with 7 Assemblymembers declining to record a vote. Local Assemblymember Rudy Salas (32nd District) voted in support of the bill while Assemblymember Shannon Grove (34th District) voted against it.

This time around, the United Farm Workers are confident in the bill being passed, saying that the new amendments made to the bill will help it gain more support from some of the 14 Democrats who either voted against the bill or declined to vote.

Meanwhile, Assemblymember Shannon Grove says she plans to stand her ground in opposition to this bill.

In a statement she released immediately after the Senate passed the bill she said, “Sacramento Democrats can’t stop themselves from hurting California agriculture and reducing farmworker hours…they mandate farmers cut the gas coming out of their cows, and now, on top of drastically raising the minimum wage, reducing emissions 50 percent, and passing numerous bills that restrict our water use, AB 1066 is mandating additional labor costs.”

“In 2014, California’s farms and ranches brought in $54 billion in revenue. Legislators need to recognize the work farmworkers are doing and do what’s fair. Farmworkers deserve the eight-hour day like any other American worker has. AB 1066 is a common-sense solution that will make farmworkers eligible for overtime pay and it starts in California, which provides over half of America’s fresh produce and sets the pace for the entire nation,” stated Luz Pena, communications coordinator with the UFW.