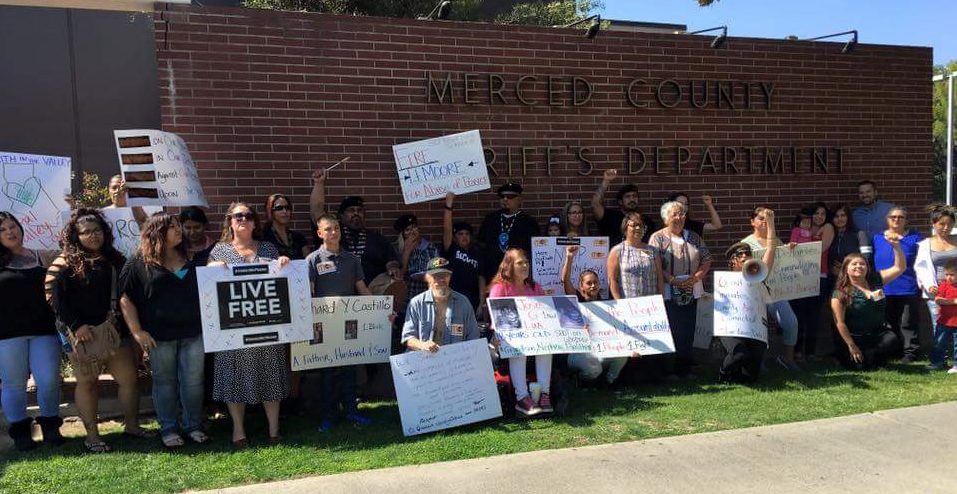 Posted at 04:14h in California by RPadmin 0 Comments

MERCED, Calif. — After 10 days without food, Victoria Castillo took her first few bites last week. The mother of two had joined a hunger strike launched by inmates that include her husband in Merced and prisons around the nation earlier this month. The meal was not sitting well.

“I just came back from lunch. We had phó (Vietnamese noodle soup) and it was so good but now I’m not feeling so well. I had my first bit of food right now because they’re negotiating today,” she said. “They started accepting breakfast and lunch as negotiating terms.”

The “they” she speaks of are the more than 150 inmates currently protesting inhumane conditions at Merced County Jail and nearby John Latorraca Correctional Facility. Castillo is one of several community members participating in solidarity with loved ones behind bars. Her husband, Richard Castillo, is currently being held at Merced County Jail while he fights charges of evasion from police. He’s been there since early 2013 and is facing life, partially due to gang enhancements which can add years and even decades to a sentence.

The hunger strike began Sept. 9 — the 45th anniversary of the Attica Prison uprising — and coincides with strikes at prisons and jails nationwide.

“He was arrested February 4, 2013 and I bailed him out April 19. On his second court date, which was May 28, the judge granted the DA’s request, based on [gang] enhancements, to raise his bail to over $650,000. They took him back into custody and it’s just been crazy ever since,” she said.

The dates and figures surrounding her husband’s incarceration are forever etched into her memory and she quickly rattles off several more, including November 2014, when her husband was first placed into administrative segregation — essentially a form of solitary confinement — and June 30, 2016, when he was allegedly seriously injured by rubber bullets as part of a housing raid in the jail.

“We knew he was injured but they wouldn’t tell me if he was dead or alive,” she said. “I was in the car with my kids when I took the call and my son became so anxious. He was in tears, he was screaming because he wanted to know if his dad was alive. They wouldn’t tell us anything at the time.”

It was only later, after several dogged attempts for an official update, that she was informed her husband was alive but had sustained injuries to his head and hand. The housing raid — which Castillo says prison officials carry out once every eight to 12 months — was one of several her husband has seen over the last few years.

The practice is intended in part to remove contraband from cells. It is among the issues inmates are protesting through the hunger strike.

In addition to Richard Castillo, a handful of other detainees were injured in the June 30 raid, including one who reportedly had a stun grenade, or flashbang, go off next to his ear and another who had just turned 18. The youth had recently been transferred to the county jail facility from a juvenile detention center and was reportedly lying down when he was shot with a riot gun.

Other concerns outlined in a seven-page letter drafted by Merced County jail inmates include having daily meals meet the designated 2,000-calorie minimum, updates to food safety protocols, accountability for correctional officers at the jails and closer oversight of hiring practices.

Castillo said the letter was formally submitted to the Merced County Sheriff, Board of Supervisors and county staff on September 9.

The detainees have also requested the Merced County Sheriff’s Department put an end to the discriminatory practice of outfitting Latino inmates in non-standard jumpsuits, which they say color-code them as gang members regardless of any official affiliation.

The department adopted the practice several years ago and says it allows correctional officers to more easily identify and secure inmates who may pose a threat to the larger population.

But, Castillo says, the colors send a clear message to court officials.

“[Merced County Sheriff’s Department] can say it doesn’t mean anything, but when [inmates] show up to court in those green-and-white or blue-and-white striped uniforms it does signal something to the [district attorney] and to the judge,” Castillo said. “It changes how they view them, so it matters.”

General population inmates are commonly given orange jumpsuits in Merced County, while the green-and-white uniforms have come to be associated with members of the Norteño gang and blue-and-white with Sureños.

Merced County inmates, whether or not they are gang affiliated, are often mislabeled as one of the two based on nothing more than their zip code and ethnicity.

In the years following her husband’s incarceration, Castillo has become well versed in the intricacies and apparent injustices embedded within Merced’s criminal justice system. She has also worked tirelessly to change it, looking for ways to bring her husband home while affecting larger change.

That passion and drive helped lead her to the Merced Organizing Project (MOP) and its Live Free campaign. The faith-based group seeks to end the mass incarceration policies pursued in recent decades. Castillo began volunteering for MOP in 2014 and was hired full-time as a community organizer in February of this year.

Her estimate may not be too far off. Recent studies have found there are, in fact, over half a million people around the country who are behind bars and awaiting trial because of their inability to cover bail, something critics say violates the principle of innocent until proven guilty.

Finding a good civil rights attorney is also difficult here because of the challenging legal reputation attributed to Merced County. Castillo said she’s spoken about her husband’s case with more than 50 lawyers at firms across the state. All are interested in the case, she says, until she mentions her location.

The most frequent complaint she hears from attorneys is how arbitrary the court system can be for outsiders. Attorneys often tell her how courthouse staff will keep defense attorneys waiting all day to speak to clients, a practice that is both frustrating and wastes a lot of time.

“People just tend to want to steer away from Merced County,” she said. “It’s kind of frustrating on my own so now I’m looking to get a class-action suit going.”

The lawsuit would focus on the June 30 housing raid and Castillo is hopeful the families of other injured detainees will also join. She’s also looking to bring attention to the poor medical care inmates receive through the Merced County jail system.

“My husband’s hand was broken during the raid and it took them 12 days to take him to a doctor so he could set it,” she said. “Two of his fingers are completely at an angle and you can still see the indentation from the impact shot.”

The Merced County Sheriff’s Department did not respond to requests for comment for this article. It has not released any statement on the ongoing hunger strike.

Castillo was told pictures were taken of her husband’s injury immediately following the raid but when she requested his medical records, staff from California Forensic Medical Group, a private company contracted by the Merced County Jail, withheld the photos.

“I paid for those medical records so I could have the photos but they won’t release them,” she said. “I tried to fight with them on that and sent [CFMG] an email but their response was that they would follow up with my husband. All this time later and we still have not seen [the photos].”

Even with the odds stacked against her, Castillo has already helped to affect some change. A few years ago, she pushed for the county jail to adopt a breastfeeding ordinance for visiting families after she was nearly denied a visit for breastfeeding her daughter.

“They were punishing me for having my breast uncovered,” she said. “They were discriminating against me because I’m breastfeeding when that’s what my breasts are for, to nourish my baby.”

After filing her complaint, Castillo said the facility passed a new rule allowing women to carry in bottles and breastfeed.

There’s still a lot of ground to cover though, and Castillo said last week’s negotiations for the hunger strike were temporarily suspended because of a staffing issue with the Sheriff’s Department.

“I didn’t think I would make it this long on the strike, but if we have to resume then we will,” she said. “It’s hurting me to know that my loved one, and the family members of others, felt so desperate that they have to do this as a last resort — as a cry for help — because their grievances are not being heard.”

Update on hunger strike: One cell-block at the Merced County Jail, which began the hunger strike Sept. 9, is still on complete strike (no food and no work/exercise programs) but several others are currently accepting a few daily meals until negotiations resume.