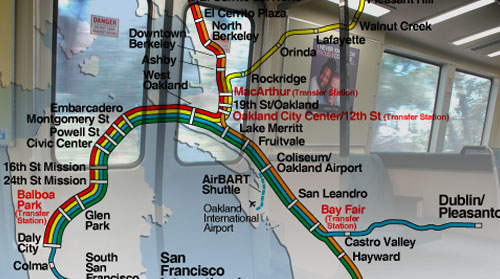 Posted at 21:53h in News, Politics by RPadmin 0 Comments 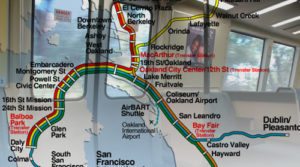 SAN FRANCISCO — In a turbulent election season, the race to fill seats on the governing body of the Bay Area’s major transit system isn’t exactly a headline grabber. Yet the race for who will represent one district on the BART board offers voters the most dramatic contrast between competing visions for the region’s future of any on the ballot.

Of the nine BART districts, District 7 is the only one that spans the Bay, incorporating three counties – Contra Costa, Alameda and San Francisco – and 19 cities. And while debates swirl around problems like crowding, aging infrastructure, and labor disputes, to name just a few; the reality is BART is struggling to hold together a region being pulled apart by gentrification.

Lateefah Simon – running for public office for the first time – has a long history as a civil rights activist in the Bay Area.

“Mobility in this moment of regionality,” she says, “does mean civil and human rights, does mean access to education and to civic life.”

Simon is head of the Akonadi Foundation, which works to improve the lives of at risk youth. She grew up in San Francisco but now lives in Oakland and relies on BART to get her daughter to school and to get to work. “There are so many people, like myself, born and raised in San Francisco … who will never be able to live here again,” she said. “But their spiritual life, their community life, is still here.”

In fact, Bay Area cohesion is unraveling. In the last 10 years, amid soaring rents, record foreclosures and stagnating salaries, thousands of residents have been pushed farther from high-cost urban centers. At the same time, new arrivals lured by the burgeoning tech sector have put added strain on things like housing and transportation.

And as people are dispersed farther afield to cities like Richmond, Antioch, and Pittsburgh – where established communities are already feeling the pinch – their reliance on BART to get to jobs, schools and other resources becomes all the more acute as the region’s periphery widens.

A new report out this month from the Metropolitan Transportation Commission shows commute times and distances in the Bay Area increasing rapidly. BART, meanwhile, surpassed ridership capacity years ago. The system currently ferries some 450,000 people per day across the region.

Simon sees BART as needing to be the glue. On her campign’s website she lists greater accessibility and affordability, especially for low-income residents, students and the disabled. She wants to do away with fee hikes, for example, pointing to a woman she met while campaigning who works in hospitality in San Francisco and lives in Richmond. “She won’t give up this job because it’s the best she can get, but it costs her $270 a month to get to and from work.”

Being poor in the Bay Area, says Simon, “is expensive and takes time.”

For Will Roscoe, also running for the District 7 seat, the solution to the area’s transportation challenges lies, ironically, in tech, which many here blame for driving the displacement to begin with.

“I’m running to try to raise the aspirations of our public transit,” said Roscoe in a phone interview, saying the culture at BART needs to reflect more the culture of “companies that are growing 100 percent a month in the transit space.”

He’s referring to companies like ride sharing apps Uber and Lyft, which have thoroughly revamped the conversation around transportation – while also drawing the ire of many who say the companies have benefited from skirting regulations that would otherwise ensure drivers a fair wage. Uber is now venturing into the area of driverless cars, something Roscoe is looking to emulate.

On his campaign’s web page, Roscoe lays out a plan for a completely reimaged BART system that is driverless and trackless.

“We have to retrain the people who are drivers to start thinking about what’s next for BART,” he said, arguing that in today’s workforce employees need to be more nimble. “If they think they will be doing their jobs for 10 years without it changing, they’re mistaken. And I don’t think BART has that focus, and it’s to the detriment of the agency and its employees.”

Roscoe says that such innovations will make BART more affordable and accessible, adding that as tech firms advance into transportation, BART and other public transit agencies will increasingly find themselves obsolete and riderless.

He points to a recently released BART plan that envisions $10 billion spent in renovations over 20 years that will, he says, result in the “same crowded, noisy, and inconvenient system” we have today.

Part of that money would come from a bond measure on the November ballot, Measure RR, which could generate about $35 billion that BART officials say would go toward much needed renovations, including the possibility of an additional trans-bay tube to relieve overcrowding.

For her part, Simon doesn’t support driverless cars. She says in the seismically challenged Bay Area it makes sense to have a human at the helm. She’s also an advocate for wages for drivers that will allow them to live in the areas they work.

District 7 incumbent Zackhary Mallett did not respond to a request for an interview, though he also lists affordability and accessibility as priorities on his campaign website.

For Simon and Roscoe, their competing visions of BART’s role in the region point to deeper strains where the forces of tech, eager to push into the future, are vying with those who want to ensure all are invited along for the ride.