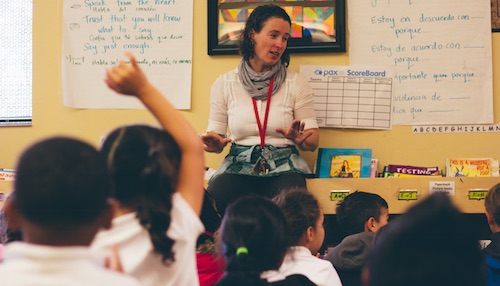 Posted at 22:31h in Education, Politics, Youth by RPadmin 0 Comments 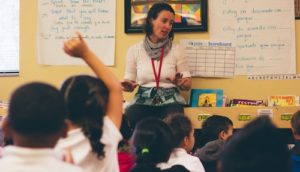 SAN FRANCISCO — Should California embrace multilingualism as a goal for its children — or recommit itself to an English-only policy that goes back almost two decades? That is the question at the heart of Proposition 58, called the “Multilingual Education Act” by supporters, which goes to the voters on Nov. 8.

There is at least one city in California where the measure is not controversial: San Francisco. In August, the city’s Board of Education unanimously passed a resolution supporting 58, with no one from the public speaking against it.

If it passes, as seems likely, according to a September Field Poll, Proposition 58 would reverse a measure that voters in 1998 approved overwhelmingly. The older measure, Proposition 227, mandated that the state’s schools focus on making immigrant children proficient in English at the expense of their home languages, pushing them into English-only classes after no more than one year.

“What Prop 227 said was that it’s not important for you to maintain your heritage language,” said Christina Mei-Yue Wong, who oversees the district’s language pathways. “Prop 58 really releases all of that and breaks down all those barriers.”

When Proposition 227 passed, said Wong, many districts in California stopped offering dual-language immersion and support to English-learners. That was not the case in San Francisco, where the district grappled with the new law by simply changing the names of its programs — from “bilingual” to “biliterate” or “dual-language immersion.”

Today, the timing of Proposition 58 could not be better for San Francisco Unified, because demand for language education is rising. Not because of increased immigration — in fact, the number of English-learners is slightly lower than it was when 227 passed. It’s because so many American-born parents want their children to learn another language. There are now 27 dual-language immersion programs in San Francisco, which also has a similar number of schools that offer “biliteracy pathways” targeted only at English-learners.

Above: Diana Vasquez left Mexico in 2005. Now both her children are enrolled at Fairmount Elementary, a dual-language-immersion school in Glen Park. Photo by Nadia Mishkin / San Francisco Public Press

“Knowing another language is really going to give students an edge in the world,” Wong said. “It’s a necessity and a pleasure. It’s something that they can be really proud of.”

Ron Unz, the Silicon Valley entrepreneur and Republican activist who bankrolled Proposition 227, said that his measure was never intended to be anti-immigrant — and that he adamantly opposes 58.

“My views haven’t changed at all,” he said. Programs that provide instruction to immigrants in their first languages discourage English acquisition and cultural assimilation, Unz said, adding that it is immigrants who are hurt the most when schools try to preserve their home language and culture.

“The problem with these programs is that they don’t really help the Latino students learn English,” he said.

Unz is critical how most programs start with primarily the immigrant language and then gradually introduces more English. This, he said, is actually to the benefit of the native-born.

Diana Vasquez does not see it that way. She left Mexico in 2005 hoping that her children would have more educational opportunities, and at Fairmount Elementary — a dual-language immersion school in Glen Park — her two boys have already achieved fluency in English.

To her, English-language fluency is one of her children’s “great accomplishments.” But she also values the formal instruction they receive in Spanish grammar, vocabulary and writing. “It’s better than what they would have gotten in Mexico,” she said. “This is the best thing that could have happened for them.”

For Alex Wise and Moira deNike, whose daughter is a fourth-grader at Fairmount Elementary, Vasquez’s two boys do indeed have a lot to teach her daughter.

“We looked at the data that showed some real benefits to having a bilingual education at a young age,” Wise said. One 2012 study, for example, found that bilinguals are better at solving both word and math problems.

“Part of what we hoped for was that putting our daughter in a school like Fairmount might teach her some cultural humility,” deNike said. “We are very happy that our child has a chance to learn another language in a public school setting, yes. But we are equally happy that it affords her the opportunity to meet peers with different experiences, and to recognize that the world is a lot bigger than our single country.”

The impact of dual-language education

In 2014, two Stanford University researchers worked with San Francisco Unified to evaluate the impact of all its language pathways on immigrants. Using 12 years of data, Ilana Umansky and Sean F. Reardon found that immigrant students in San Francisco’s dual-language immersion and biliteracy programs were slower to be reclassified as fluent in English than students in English-only programs. This would seem to bolster the case against bilingual education.

However, the researchers found that over time, English fluency balanced out for the students. In fact, they found that Spanish-speaking students enrolled in dual-language programs ultimately achieved a higher level of English proficiency and academic success by end of high school than kids in other programs, including English-only immersion.

In addition, district data suggest that those who went through dual-language programs were better able to retain their home language.

To succeed, Umansky said, districts need to offer a wide range of language pathways to students. “Opponents of bilingual education tend to lump them all together, but there’s a huge range of multilingual programs,” said Umansky, who is now at the University of Oregon. “One of the reasons why diversity exists is that programs should reflect the communities that they serve, and they should be responsive to the interests and values of families in the community.”

Wong said it is crucial for districts to track student outcomes carefully and never stop learning about what works and what does not. “There’s not just one magic bullet and things are going to be fine,” Wong said. “People’s needs are always changing.”

Wong and Umansky agree that the most important thing a district can do is treat the home languages of immigrant students as a strength, not a weakness.

“We have kids entering education systems with enormous assets,” Umansky said. “But rather than cherish that asset, and strengthen it, and promote it, our schools devalue it, shame students for it, and take it away from them.”

To Umansky, that’s not just harmful to students.

“It’s harmful to our country. Bilingualism is beneficial for all of us — economically and politically,” she said. “We need to see bilingualism as a gem that we are protecting and cultivating.”

(Note: You can read a longer version of this article at SF Public Press, along with a breakdown of the data around multilingual education in San Francisco and neighboring counties.)

This article is part of an ongoing series on bilingual education in San Francisco and across the state. Funding for this project comes from California Humanities.