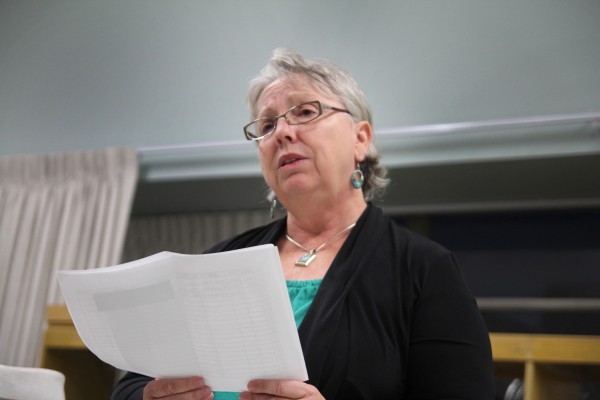 26 Nov Councilmember Gayle McLaughlin: Richmond Is Not Going to Cooperate with ICE

EDITOR’S NOTE: Richmond City Councilmember Gayle McLaughlin describes how the city is preparing to protect its immigrant residents under a Trump presidency. McLaughlin is a member of the Richmond Progressive Alliance and a former two-term Green Party mayor of Richmond. She was interviewed by Richmond Pulse.

Richmond Pulse: How can the city of Richmond safeguard its immigrant residents, especially those without documents, in the event the Trump administration launches a deportation campaign?

There’s a group of community leaders in the city that have been working with immigrants and are stretching out into the community to organize and see how we can strengthen our policies even further to make it clear that Richmond is not in any way, shape or form, going to cooperate with ICE.

I think the Trump concept of deporting 11 million undocumented immigrants is outrageous, but we have to take everything seriously and I think that requires organizing. And that’s what’s happening in Richmond, and it’s happening in other cities. I think that networking or bonding with each other through our values, city by city throughout the nation, is what’s going to stop any attempts to do this kind of harm and inhumane type of approach to our immigrant community.

RP: As a sanctuary city, Richmond is liable to have a lot of federal money withheld under President Trump. How could this affect the city?

GM: Well, I think first of all, we are strong enough to prevent that. We have San Francisco taking the stand that this is not going to in any way stop them from stating their support and protection of their immigrant community. Richmond has that and other cities throughout the Bay and actually throughout the nation.

I’m a part of an organization called Local Progress, which has progressive elected officials throughout the nation as membership and we have taken campaigns to state our opposition to the hate and bigotry that we found during the presidential campaign. I will be networking with those cities, to stand up against any federal funding that is proposed to be withheld. We have progressive lawyers that can take these issues to the courts. I think we have to use every tool that we can locate to showcase that we are inclusive in the U.S., we are a diverse community and that’s our strength and we’re not going backward.

RP: What’s your assessment of Trump’s promise to make life better in low-income neighborhoods that have for too long depended on Democrats? Is this the time to shake loose of old dependencies and look for new partners?

GM: I think the Republicans certainly don’t offer an answer in terms of their policies. But I also have problems with the Democrats, who I believe have shown through this last election that they are not in touch with the people and that they could not even defeat Donald Trump, such an outrageous person with hateful comments and approaches to how to change our community, which he considers bettering our community. I think not. So I think we need to build those progressive alliances like we have in Richmond throughout the nation.

The amount of communications that we have gotten since the election, since our local election here, has been astounding. I mean, there’s progressive alliances forming all over the state and in other states wanting our members to come and tell them know how we [got a progressive majority on City Council]. There’s San Diego, San Jose, Oakland, El Cerrito, Vallejo, Marin County. There’s also people from Texas, New Jersey, Wisconsin, Vermont.

But in order to build that grassroots power, like Bernie [Sanders] talked about throughout his campaign, we need to have those local coalitions get people inside the City Councils, like we have in Richmond, so that we can have that synergy between community leadership and corporate-free elected officials who get it, that government should not be run by corporations or Wall Street. I think independent thinking, standing apart from party affiliation, is the route forward right now. Standing for values and policies that protect our communities.

RP: California went its own way in the elections–in a sea of red, it’s distinctively blue, except for the state’s inland areas. Is California now an outlier, or is it the future? Or both?

GM: I think California has shown itself to be distinct. I think the west coast in general has shown that. And so I think we just have to keep showing who we are as a state and and that requires a lot of new leadership, as well as many great progressives that we have already in California.

RP: How can you help alleviate the divisions that were ignited or enflamed by the election within our own city?

GM: I really think that is exactly what we in the Richmond Progressive Alliance want to do. We put out a statement right after the election saying that it’s in all our interests to focus on the betterment of Richmond, and not be distracted by past disagreements or grievances. There’s a lot that the whole new Council will agree on. We have many shared values and, when we disagree, we should disagree respectfully. Even as our nation is racked with so much division right now, I think in Richmond, we can show that decency is the way we move forward. Yes, we can disagree with each other, but we can do it in a very healthy and civil way.