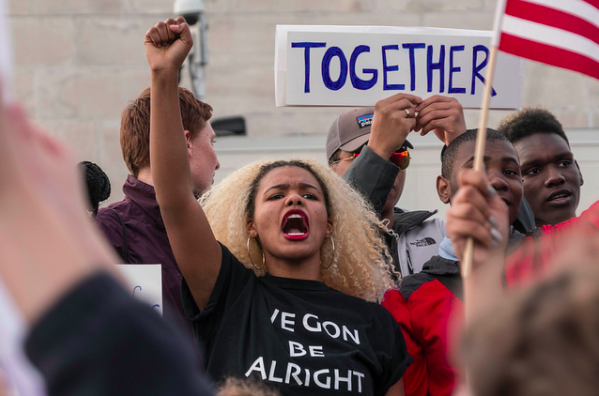 08 Dec Not My President: A Reflection on the Presidential Election

Posted at 20:51h in Politics, Youth by RPadmin 0 Comments 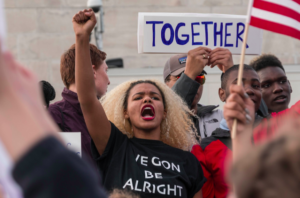 November 8 came as a shock with Donald Trump’s win as president-elect of the United States.

Leading up to Election Day, my Facebook newsfeed was saturated with profile photos in support of Hillary Clinton and statuses about reluctantly casting votes for Clinton to ensure a Trump defeat. I did not see a single post in support of Trump. That isn’t surprising: my friends’ list largely includes black women and other women of color, LGBTQ+ individuals, immigrants or children of immigrants, activists and organizers on the frontlines of protests across the country, and various combinations of the aforementioned identities.

But my Facebook friends aren’t representative of the entire country.

More than 50 percent of white people voted for Trump. People of color, including black, Latino/Hispanic and Asian Americans, voted for Trump in smaller numbers, with an overwhelming majority voting for Clinton.

In an unsurprising move, the majority of black women voters showed up for Hillary Clinton while the majority of whites across the board—from college-educated and wealthy to poor, working class—voted for Trump. That includes white women who turned their vote to Trump instead of Clinton, who would have been the first female president. Of college-educated white women voters, 51 percent voted for Clinton.

Despite Clinton winning the popular vote, Trump gained the most electoral votes.

The results came as a shock to many. The former secretary of state was not the first choice for many Americans, but it seemed like a no-brainer to vote for her, however reluctantly, in order to avert a Trump presidency.

As many Americans pondered what went wrong, protests erupted around the country.

In the Bay Area, high school students walked out of classes and marched through the streets. There are calls for turning university campuses into sanctuaries for undocumented immigrants. The future of young people seems to be in the hands of an administration that believes their lives do not matter.

As inauguration approaches on January 20, many Americans are coming together to denounce Trump’s presidency.

The election and impending administration has pulled back the curtain that white supremacy tried to hide behind. There is increased fear of discrimination and there have been increased threats and acts of violence. Fear already pervaded the lives of marginalized individuals; there is no way we can try to live peacefully when it feels the country voted against us.

This is the time to increase public support of Muslim communities in the face of Islamophobia, undocumented immigrants and communities fighting deportation, women without access to abortion services, and other communities who may be under attack.

We must follow the lead of marginalized communities that have been fighting back. Speak up when you see or hear an act of discrimination. Support groups and organizations with monetary donations or volunteering. Contact your representatives to encourage them to do their jobs and protect their constituents.

My hope is that the protests will continue to evolve into organized, sustainable efforts to reject white supremacy and bigotry.

Trump is not our president, but this is our country.