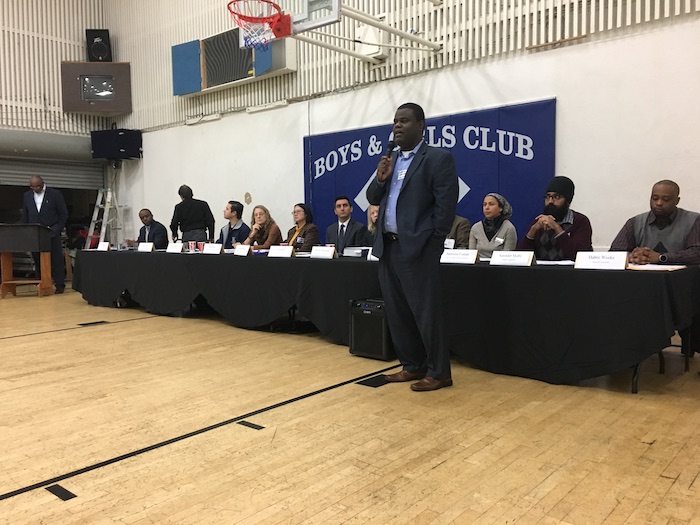 Posted at 21:03h in Arts and Culture by RPadmin 0 Comments

In the wake of reports of two hate crimes in West Contra Costa County and hundreds throughout the country since the election of Donald Trump, West County residents came together to address the recent increase and discuss ways to deal with them locally.

“We want to stand up to hate and bullying in the wake of the homicide of Will Sims and the assault of Maan Singh Khalsa, a Sikh member of our community,” said County Supervisor John Gioia.

Twenty eight-year-old African-American William Sims was beaten, robbed and then shot in El Sobrante on Nov. 12. Maan Singh Khalsa was beaten and had his hair cut off by attackers at a traffic stop near Hilltop Mall on September 25.

The FBI defines a hate crime as a “criminal offense against a person or property motivated in whole or in part by an offender’s bias against a race, religion, disability, sexual orientation, ethnicity, gender, or gender identity.”

Though there is currently no definitive data for hate crimes in the United States, recently released data from the FBI show a 6.8 percent increase in hate crime incidents from 2014 to 2015, with attacks on Muslims increasing by 67 percent.

The numbers reveal that of the hate crime incidents reported in 2015:

56.9 percent were motivated by a race/ethnicity/ancestry bias.

21.4 percent were prompted by religious bias.

2.0 percent were motivated by gender-identity bias.

1.3 percent were prompted by disability bias.

0.4 percent (23 incidents) were motivated by a gender bias.

This year, as of Dec. 12, there were reports of 1,094 harassment and intimidation incidents following the presidential election, according to data collected by the Southern Poverty Law Center.

“The time has come for us to reach out to others to learn about each other and to understand where they’re coming from,” said Sameena Usman, government relations coordinator for the Council on American Islamic Relations, who was one of 11 panelists who spoke at the event. “This goes for both liberals and conservatives,” she said.

Usman said the election has led to more conversations within Muslim communities about how to address rising Islamophobia.

“There have been lots of discussions [about whether] people who wear the hijab should take it off,” she said, “or whether or not men should change their names or children should be pulled from schools and go to home school.”

“What I tell them is, ‘Look, we are not the first folks to be targeted and we’re not going to be the last, unfortunately,’” said Usman.

“This is not the time to retreat into our own shells. This is the time to double up, triple our efforts to reach out to folks. To let them know we’re not scary, we’re just like everyone else,” she said.

Martinez resident Satinder Singh Malhi, a volunteer with the Sikh Coalition, added that what happened to Khalsa reflects “a dark underbelly that exists out there,” even in the supposedly progressive and tolerant Bay Area.

“I wish that I could say this was an isolated incident. Sadly it is not,” said Mahli.

“Members of my community have witnessed it firsthand,” he said.

But he said the forum gave him hope.

“Only by coming together and working together as a community,” he said, “can we hopefully deter future incidents like this and be able to say in one very loud, unified voice, ‘Not in our town. This is not acceptable and we’re better than this.’”