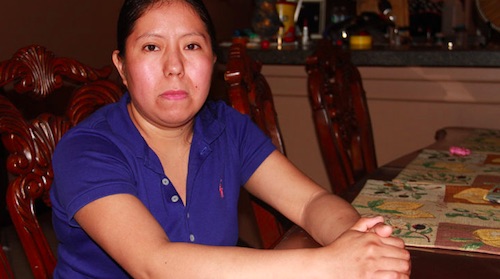 Posted at 03:38h in California by RPadmin 0 Comments

Editor’s Note: Stories about female farmworkers often examine issues experienced by these women in their work environments, in the fields. There has been extensive reporting on the abuse and harsh working conditions these women face daily. But we rarely get to see what life is like for these hardworking women at home, off the fields. This story uplifts the voices of women who find themselves stuck in cycles of poverty, unable to find any moment for rest, and it looks at how traditional gender roles in farmworker communities only perpetuate that cycle. (Above: Alicia Benito sits her family home in Mecca, Calif. Benito works 50-60 hours a week in the fields of the eastern Coachella Valley to help provide for her children. Image: Paulina Rojas/Coachella Unincorporated)

MECCA, Calif. — Alicia Benito’s shift picking limes in the fields in and around Mecca, a rural community about three hours east of Los Angeles, starts at 8 a.m. But like a lot of female farmworkers, her day gets going long before first light.

“First I have to make lunch for the children, my husband and myself,” said Benito, a wife and mother of three, ages 9, 7 and 1. The family shares a rented one story house in a neighborhood surrounded by farm fields. “At 6:30 a.m. I wake up the kids and get them ready. At 7 a.m. I drop off the oldest ones at the school bus stop and then I take my youngest one to daycare.”

Benito is short and soft spoken, her hands are small but strong. She appears shy and serious at first but just a few minutes into our conversation she smiles and cracks a joke. Her laughter immediately brightens the mood of an unusually cold and dark winter evening.

Sandra Ramirez worked more than 10 years in the fields before leaving to focus on her education and her children’s education. (Image: Paulina Rojas/Coachella Unincorporated)

After her whirlwind morning routine, Benito, 27, heads to the fields where she spends 8 or more hours a day crouched under trees and exposed to the harsh desert sun. She does this six days a week, often working 50-60 hour work weeks.

Benito says the back-breaking labor takes a physical toll on her, leaving her exhausted at the end of each work day. But when she gets home, there’s still no time to rest. Benito’s nighttime routine starts by preparing food and taking care of her children.

“When I get home, I make dinner … and then it’s time to get [my children] ready for bed,” she said. “I would like to spend more time with my children but I just can’t, not with my schedule.”

Working in the fields is not a career path she would have chosen, had there been other options. But for many women in the eastern Coachella Valley, career opportunities are limited, especially for those without a high school degree.

For Benito, the surrounding fields presented the only option for employment.

Accurate data on farmworkers living in the eastern Coachella Valley is difficult to find. However, the United States Department of Labor conducted a National Agricultural Workers (NAWS) survey throughout fiscal year 2013-14 and found that only 17 percent of survey respondents reported that they had completed high school. Only 5 percent reported that they had college degrees.

Benito dropped out of school in the 8th grade to help her parents, who are also farmworkers, care for her five siblings because they could not afford childcare. She started working in the fields five years ago after she and her husband, who works in construction, began struggling with mounting bills. It’s the only work she’s ever done.

“We had a lot needs, there were a lot bills that needed to be paid,” she said. “Since I didn’t finish school, my only option was to go work in the fields.”

It is a relentless schedule, but by making $400 a week, Benito and her husband are able to make ends meet for their family of five. It’s times when she can’t work, like when she was pregnant, that things become difficult. Female farmworkers do not receive maternity leave, so during those months during and after the pregnancy Benito’s family was forced to rely on her husband’s paycheck.

“It was very difficult during those times with just my husband bringing in money, we had to find ways to really reduce our spending,” she said.

“Women dedicate themselves only to working and forget about things like academics and learning English,” Gonzalez said.

She added this cycle affects the whole family. If mothers are not able to pursue an education or develop their language skills, it makes it difficult for them to become involved in their children’s education.

“They can’t help their children succeed because they don’t know the language,” Gonzalez said. “It is frustrating for both the mother and the child. Field work does not leave women with good options.”

Sandra Ramirez, 40, spent more than 10 years working in the agricultural industry, harvesting everything from dates to table grapes and mangoes. Three years ago she stopped working in the fields to spend more time with her four sons and to pursue a college degree.

“I decided to stop working in the fields, mostly for my sons,” she said in Spanish. “Sometimes they tell me that they want to go work there too and I tell them no.”

Like Benito, Ramirez’s work on and off the field left her with very little time for her children and herself.

“When I worked picking grapes, I would wake up at 4 a.m., make my lunch and head out to work at 5 a.m,” she said. “Then I would come home, make dinner, clean and just make sure that everything was in order.”

Ramirez said leaving the fields was one of the most valuable lessons she was able to teach her sons.

“I want to show them that they have more options, that they can do more,” she said.

Though she no longer works in the fields, Ramirez said she sees how traditional gender roles that are prevalent in the eastern Coachella Valley add to the burden that female farmworkers face on and off of the fields.

“For women, it is harder. We can’t just come home, drink a beer, watch TV and relax,” she said. “We still have to make sure everything is done around the house.”

Gonzalez said these traditional gender roles make it difficult for women in farmworker communities to see themselves as agents of change. But Lideres Campesinas is working to change things. The grassroots organization regularly holds meetings throughout the eastern Coachella Valley to educate women on their rights at work and at home.

“We teach women about physical and emotional abuse but also about equality in the home,” Gonzalez said, adding reaching the men is a tougher challenge. “[But] many of the men in our community are ‘machista’ and they don’t feel the need to come to our meetings.”

Gonzalez said they want to bring men into their meetings to show that equality in the home is important for the well-being of the whole family.

For now, working in the fields is a necessary sacrifice Benito makes so that her children can have a better future and hopefully become the first in their family to graduate from college.

Benito, who is originally from Mexico, recently gained citizenship and said she would someday like to go back to school.

“I don’t know exactly what I want to study but I would like to enroll in a program that I could finish in a few years,” she said. “With the kids I won’t have too much time to finish a long program.”

In the meantime, she plans to continue working the fields to support her family and hopefully ensure that her kids have other options.

*This story was produced as part of the Marguerite Casey Foundation Equal Voice Journalism Fellowship.*

About the author: Paulina Rojas joined Coachella Uninc. as a beat reporter in February 2016 after working as a city reporter in the eastern Coachella Valley for more than a year. Although born and raised in New York City, Paulina feels right at home in the eastern Coachella Valley. She loves the warmth of the people and buying fresh bread from her favorite bakery in downtown Coachella. Paulina is a graduate of the University of Houston, and her work has appeared in The Las Vegas Review – Journal, The Houston Chronicle, HelloGiggles and Vivala. View her author page here.