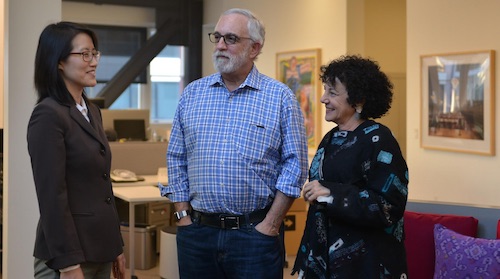 Posted at 05:29h in People by RPadmin 0 Comments 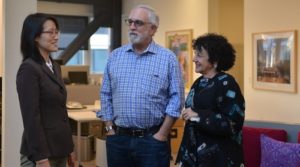 Editor’s Note: On Tuesday, former Reddit CEO Ellen Pao announced that she’s joining the Kapor Center for Social Impact in Oakland as its new chief diversity and inclusion officer, as well as the organization’s venture capital arm, Kapor Capital, as an investment partner. Pao is well-known for a 2012 gender discrimination lawsuit she brought against one of her former employers, Kleiner Perkins Caufield & Byers, which raised the profile of discriminatory behavior toward women in Silicon Valley. The Kapor Center works to increase diversity in tech through programs like the Level Playing Field Institute, which helps students of color pursue careers in STEM fields. Its investment arm works with socially-conscious startups, many of which have women and people of color at the helm. Anna Challet interviewed Pao at the Kapor Center’s new headquarters.

What will you be doing in your new role?

The primary role is at Kapor Center, where I’ll be driving diversity and inclusion as part of their team. I’m excited because this group of people has been working on diversity and inclusion for decades. It’s a shared vision of everyone in tech having a fair shot to succeed. The Kapor Capital part is also really exciting because it’s taking all of what we’ve learned and helping portfolio companies implement it. I’m excited about this growing understanding of diversity as being tied closely to inclusion. It’s not just about hiring a bunch of people. It’s about hiring people and making sure they can thrive in the environment.

What is the current conversation around diversity in tech, and where do you see it going?

I think there’s a growing understanding that diversity is about more than gender. A lot of the bigger companies feel overwhelmed by the amount of work they have to do on diversity, and they focus on gender. This idea that diversity is gender, and which often means white women, is concerning to me. It suggests that some companies aren’t understanding the problem or the solutions. I would love to see more companies understand that if they include only women in their diversity efforts, they have an in-group and an out-group, and they still have all these people who are not included. They’re not creating an inclusive culture, they’re just including more people in their exclusive culture.

As part of my work in Project Include, we’ve seen companies that are committed to diversity and inclusion, that are willing to learn and do the hard work of making sure everybody feels like they belong. That’s been very inspiring to me.

In President Obama’s farewell address, he brought up automation and the economic displacement it will cause. Do diverse leaders have a role to play?

My hope is that automation frees up the labor to do high-value jobs. My fear is that the development of automation technologies won’t be diverse and inclusive, and that you end up with all the kinds of problems that you see today – that automation will have a disproportionate impact both on a socioeconomic level and for underrepresented groups. It takes having your product leaders and your engineers and your marketing folks being reflective of the population in order to make sure people aren’t embedding all sorts of bias into these technologies as they progress.

What are you most concerned about when it comes to diversifying tech?

The biggest worry I have is that it’s not changing fast enough. I’ve been in Silicon Valley since 1998 and I’ve seen unbelievable amounts of change, and it’s not always for the better. Here we have an opportunity to be inclusive and to bring all of the benefits of having everybody involved in the work, and take advantage of all their capabilities, and we’re not doing it. Even though we’ve recognized that it’s a problem, I’m worried that we’re not solving it fast enough. There’s all this wasted talent.

Why is the industry still having so much trouble changing?

One of the biggest problems is that this industry started with a very homogenous group, and as they became successful, they built that homogeneity into the structures, into the relationships, into the power of tech. And it’s a self-fulfilling prophecy. If we only invest in this homogeneous group, only people who are part of it are going to be successful. The fallacy is that people assume that the homogeneity is what makes the team successful, when it’s really just that that’s who’s had the opportunities.

I’ve been in tech for 20 years and most of the people I’ve worked for are white men. I could take that to mean that those are the only people who are going to be successful. That social dynamic is very powerful and it’s very hard to break down. The people who are in power have succeeded through this system and there’s no reason for them to think that it doesn’t work. I still see people who believe that tech is a meritocracy, and that is scary.

What’s the problem with the meritocracy idea?

I think the people who are very comfortable with calling tech a meritocracy, who have succeeded and don’t want to think about other people, are comfortable with the state of the industry. It’s hard because everybody wants a meritocracy. Who doesn’t want everybody to be rewarded for their contributions, for their hard work, for their value? It’s a great thing to aspire to, but it’s a terrible thing to assume that what we have today is a meritocracy when you see so many problems, that so few people who are not white men are able to succeed.