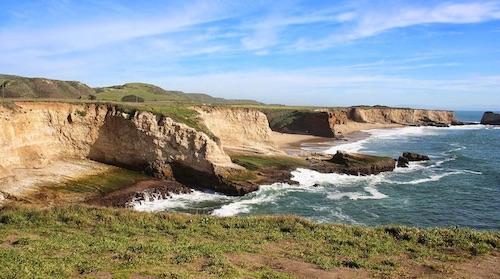 Posted at 00:00h in Environment by RPadmin 0 Comments 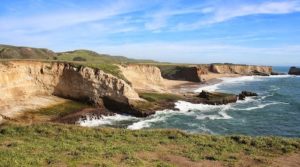 Above: A view of Panther Beach, part of the Cotoni-Coast Dairies in Santa Cruz County and one of six sites designated by President Obama as part of the California Coastal National Monument. (Image courtesy of Wiki Commons)

President Obama’s announcement of a 6,230-acre expansion of the California Coastal National Monument puts the spotlight on the state’s coast just when rising seas and growing pressures to develop and drill threaten to erode access for millions.

It also provides a boost to a growing movement of activists and educators working to engage a new generation of Californians as stewards of the state’s storied 1,100-mile coastline.

“This designation is important because … it gets us to a place where monuments conserve natural resources and celebrate cultural treasures,” says Marce Gutierrez-Graudiņš, founder and executive director of Azul, a non-profit that works to empower the Latino community around coastal advocacy.

The expansion of the coastal monument includes six new sites located in Humboldt, Santa Cruz, San Luis Obispo, and Orange Counties. The move is being widely celebrated by coastal advocates across the state.

The Cotoni-Coast Dairies in Santa Cruz are among the sites designated under the move. Lopez notes the site’s designation will help ensure “that the many cultural, spiritual and natural resources of this area will be protected in perpetuity.”

Gutierrez-Graudiņš calls the move a “win-win.” Pointing to the Cotoni-Coast Dairies, specifically, she says the site’s designation presents an “opportunity to celebrate thousands of years of stewardship” by people of color who are not often seen as stewards.

The designation comes as California’s coast is buffeted by threats of sea rise, demographic changes that put increased pressure on development of coastal areas, and a political climate in Washington that has environmental advocates bracing for the worst.

Various models offer up predictions on the impact of sea rise and climate change on California’s coast, which represents a $44 billion industry for the state. Most show that by 2100 many of the beaches that dot the coastline and are favorite destinations for residents will disappear as a result of higher seal levels and erosion.

At the same time, proposals by the incoming Trump administration to privatize public lands and open space have raised fears about California’s ability to fend off a federal government pining for some of its most valuable real estate.

Advocates say that rallying an enaged public to act as defenders of the coast is key in that fight.

Jon Christensen with UCLA’s Institute on the Environment and Sustainability says that while the past 40 years of coastal advocacy were marked largely by activism to fight privatization, the next 40 years will be about “expanding access” to communities not ordinarily associated with coastal protection.

That means addressing existing barriers such as a lack of transportation and affordable lodging, among others, that keep many would-be beachgoers from visitng the coast. But it also means diversifying the field of coastal advocacy, which is something Gutierrez-Graudiņš has spent the past 10 years doing.

She says communities of color in California are not now reflected in the groups working to protect the state’s coast.

“Every time I walk into an ocean conservation event, I’m usually the only person of color or one of a handful,” she says. “Once we get into the field of conservation, ocean conservation is probably one of the worst ones in terms of diversity. This is where we need to do the most work.”

A 2014 report highlighted the lack of diversity among mainstream environmental groups, noting that people of color accounted for just 16 percent of all staff at environmental organizations nationwide.

Gutierrez-Graudiņš says the lack of representation is especially problematic given threats to the California coast and coastal access.

“We need all hands on deck,” she says. “You cannot protect 1,100 miles of coastline without the support of the majority of the state. And that means by definition that you have to diversify.”

Latinos account for roughly 39 percent of all California residents, followed by whites (38 percent) and Asian Americans (14 percent). African Americans make up about 6 percent of the state.

Azul is among a number of organizations aiming to connect more communities to the coast. Similar groups include Wildcoast and Mujeres de la Tierra in Southern California; CAUSE, which focuses on environmental justice issues along California’s Central Coast; and Brown Girl Surf, an Oakland-based non-profit dedicated to fostering surf culture among young girls of color in the Bay Area.

“Surf culture as it currently exists has a big problem with diversity,” says Brown Girl Surf Director of Operations Melissa Rosa Morazan, who adds her organization is working to counter the prevailing “bikini culture” that currently surrounds female surfers.

“We’re trying to shift that culture to one that is created in the eyes of women of color. And the way we do that is by increasing access, by building a community around surf culture and a connection to the ocean,” says Morazan.

Morazan says obstacles like transportation and cost do keep more young people of color from visiting the coast. But, she adds, culture can be an equally imposing barrier.

“They don’t see other women of color surfers,” she notes of the girls in the program, “and so if you can’t see it, then it’s hard to believe that you can be part of that community as well.”

To date, Brown Girl Surf has managed to connect over 130 young people to the coast through surfing. And the hope, Morazan notes, is that through that connection will come a “desire to be a part of the conservation movement.”

But Morazan echoes Gutierrez-Graudiņš, saying that while there is “some momentum” toward broadening the base of coastal advocacy to include communities of color, “there is still a long way to go.”

According to Gutierrez-Graudiņš, the White House’s designation of the new sites will help spur that effort along, allowing more people and communities to “see their culture celebrated … and to feel more comfortable making these places their own.”