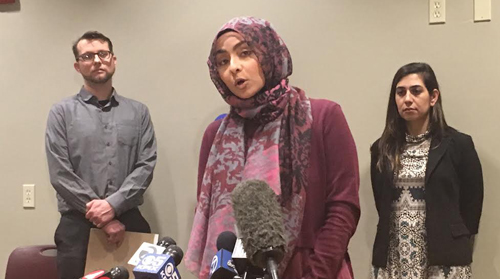 Posted at 15:49h in Politics by RPadmin 0 Comments 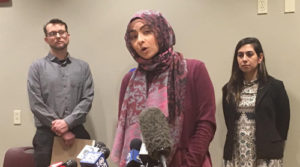 “This is an attack on all communities and we are prepared to fight with our black, African, Latino and Asian American allies,” Sharif Zakout, youth program coordinator at Arab Resource and Organizing Center (AROC), said at a press conference in San Francisco on Thursday.

“We have an obligation as Asian Americans to speak up when the most shameful parts of our history stand to be repeated,” said Karin Wang, vice president of programs and communications at Asian Americans Advancing Justice – Los Angeles in a statement on Friday. “The unfair targeting of Muslim immigrants is a haunting reminder of the Chinese Exclusion Act of 1882: during a period of intense anti-Chinese violence and persecution, it was the only U.S. law ever to ban immigration of a specific ethnic group.”

“Sadly, as we in the Jewish community know all too well, shutting the doors to people desperately fleeing for their lives harkens back to the World War II era,” writes Jonathan Greenblatt, director of the Anti-Defamation league.

“In one of the most infamous cases of American callousness to the plight of Jewish refugees, in 1939 President Franklin Roosevelt turned away the transatlantic liner St. Louis. The ship, which was sailing so close to Florida that the passengers aboard could see the Miami lights, was carrying 937 German refugees — most of them Jews fleeing the Third Reich.”

The Miami Herald reports that one man launched a Twitter account to recount the fate of passengers on the ship, which was turned away and returned to Europe. More than 250 of its passengers died in the Holocaust.

“It is an American tradition to offer humanitarian support to those who need it most. It is also an American value not to discriminate on the basis of national origin or religion,” she said. “Now is not the time to shut our hearts and doors to immigrants and refugees who seek to build better lives, contribute to society, and bring communities together. We must not allow President Trump’s myopic view of the world to limit the American people’s indefatigable commitment to treat others with generosity, dignity, and compassion.”