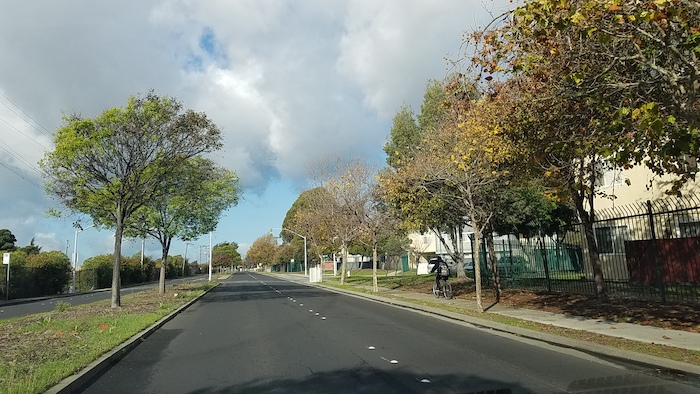 Posted at 22:38h in Neighborhoods by RPadmin 0 Comments

Pedestrian and bicycle improvements are headed to Carlson Boulevard.

The Richmond City Council recently approved the Carlson Crosstown Connection project, which will reduce vehicular traffic to one lane in both directions from Broadway to Bayview Avenue, in order to make way for bike lanes.

Other improvements will include new ADA curb ramps, high-visibility crosswalks, a median pedestrian island and bike lanes from Bayview to Tehama that will not reduce traffic lanes.

The project, which is funded by a $500,000 Safe Route to Transit grant, is intended to make Carlson Blvd. safer for both pedestrians and cyclists. Once completed, Carlson Blvd. will feature four miles of continued bike lanes and easily connect residents to the Richmond Intermodal Station, El Cerrito Plaza BART Station, AC Transit line 72, Richmond Civic Center and the eastern side of the Richmond Greenway and Bay Trail.

Najari Smith, chair of the Bicycle Pedestrian Advisory Committee for Richmond, said the project will improve safety not just for cyclists, but also for pedestrians.

“Reduced speeding on Carlson will make it so that people, young and old, can cross the street, access the bus and ride their bikes without fear of being run over,” said Smith, who is also the owner of the local bike repair shop Rich City Rides.

“The more people ride bikes, the less people will drive cars, and that amounts to safer streets for everyone,” he said.

Despite the planned improvements, some of Richmond’s south side residents strongly oppose the plan because of the lane reductions. Many voiced concerns about traffic congestion, emergency vehicle access and excessive speeders.

“At every [City Council] meeting, no one approved of the lane reduction of Carlson,” said Naomi Williams, president of the Pullman Neighborhood Council.

“We are not saying no to bike lanes, but we are saying no to reducing Carlson Boulevard to one lane in either direction. It is unfair that the residents that use it have no input to the change and redesign of Carlson.”

But city staff say the effect on vehicular traffic should be minimal. A traffic study found that Carlson Blvd. carries less than 9,000 daily trips but is designed to accommodate over 38,000.

Once construction begins, the project is expected to take three to five months to complete.