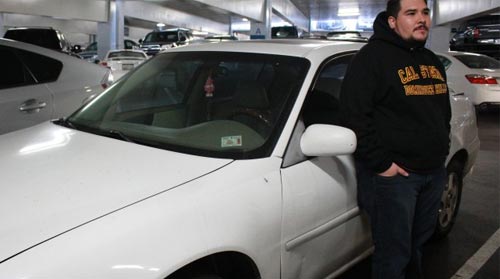 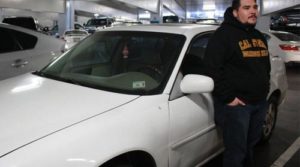 LONG BEACH, Calif.–Alicia Morales, an undocumented immigrant, wore many hats before she qualified for the Deferred Action for Childhood Arrivals (DACA) program.

Morales was a history major at California State University, Long Beach, in 2011, when she had to take time off because she couldn’t afford it. During that time she worked as a janitor, tutor, counselor and personal assistant all at once for about half a year. She was able to go back to school after getting a full-time internship.

Then she applied for DACA.

“When DACA came around, I was able to apply to more jobs that were vested in my professionalism and allowed me to use skills that I developed over time as an organizer working for nonprofits,” Morales said.

Morales is now the lead organizer for the Long Beach Immigrants Rights Coalition (LBIRC), a nonprofit organization that provides immigrants in the Long Beach community with resources and services and engages in political advocacy, according to their website.

DACA was created by an executive order of former President Barack Obama that allows qualified undocumented immigrants, such as Morales, who came to the United States before they were age 16 to obtain a driver’s license and work permit without possibility of deportation for two years. Over 750,000 undocumented immigrants, often called “Dreamers,” have been approved for the program.

Now the fate of the program rests in President Donald Trump’s hands.

Given his recent volume of executive orders and memoranda, Dreamers worry Pres. Trump may deliver on his promise to rescind DACA, which would not only affect immigrants, but also shape the U.S. economy.

According to a survey by the Center for American Progress, DACA has had a positive impact on the American economy. For example, DACA beneficiaries are making major tax contributions to states and localities, such as when they buy a car, house or make other big purchases. Some are also creating businesses and jobs as entrepreneurs, according to the center’s report.

“I have been able to open lines of credit, which was very difficult to do in the past,” Morales said, “And I was able to get an apartment because I had a credit history, and I had a job that paid enough to let me move out.”

The survey also found that 63 percent of undocumented immigrants under DACA get a better-paying job and 49 percent are able to find a job that better suits their education and training.

“[DACA] afforded me the ability to look for work that fit my interest and my passion,” Morales said.

The Federal Insurance Contributions Act requires employers and employees to contribute to Social Security and Medicare. According to a study conducted by the Immigrant Legal Resource Center, if Trump ends DACA with no replacement, there will be a reduction of about $24.3 billion in contributions in the coming decade.

California and Mexican officials have also begun discussing how they may help U.S. Dreamers apply their education and skills in Mexico should Trump deliver on his pledge to rescind DACA and deport millions of the nation’s undocumented people.

Despite widespread claims, many undocumented immigrants who work still contribute to Social Security, but will likely never see the retirement benefits that come with it because of their status. The Atlantic reported that, according to the Social Security Administration, undocumented immigrants contributed $13 billion to the program last year, while taking only $1 billion in benefits.

Morales graduated in early 2014 and since she had DACA, she was able to land a position at the LBIRC as a part-time organizer because of the legal work permit. Now, she gets to help undocumented immigrants like herself on a regular basis.

“We have become a force to be reckon with,” Morales said of the progress made over the last 20 years by immigrant activists in California.

Regardless of DACA’s economic benefits, reversing it would also force recipients back into the shadows. DACA provides temporary relief for undocumented immigrants to apply themselves in the workforce.

Many Support Their Families

Many DACA recipients aren’t just working for themselves, many provide for their families as well, said Sandra Ruiz, Immigration lawyer for Loyola Immigrant Clinic.

“When I’m not at school, I’m at work, washing pots and pans to make a living [and] help my parents out,” said Omar Lopez, 28, is working full-time as a dishwasher and steward at the Hotel Maya in Long Beach.

The days of laboring as a teen in construction work are behind him, and now earning better pay, he contributes more than $3600 in yearly taxes.

Lopez said that if DACA were to end, he and his parents would have to move to Mexico and their financial lives would be “starting from zero.”

“Thanks to that work permit, I’m able to pay for my school supplies, pay for my car, [and] help my family financially,” said Lopez, who attends California State University, Dominguez Hills. He paid off his 2002 Chevy Malibu with a $1,200 in-full payment.

Lopez was born in Jalisco, Mexico, and was brought as an infant to the U.S. at age two. Being the oldest of five siblings, Lopez provides for roughly 40 percent of his family’s financial needs by paying for groceries, utilities, car insurance, internet and other expenses.

“Since I’m able to help out, we live a pretty comfortable life,” he said. “… If I didn’t have the DACA, [my parents] would probably be living paycheck to paycheck and stretching every penny.”

Morales has also been able to help her family with finances and her younger sister’s college tuition. “Our success enables us to support our families,” Morales said.

While the future may look grim for DACA recipients, in December, a bill, known as The Bridge Act, was introduced in Congress offering them a shimmer of hope on the horizon. It would carry on the work permits and deportation reprieve that DACA affords, and would also allow for information collected by government agencies to remain secret unless deemed necessary.

If enacted, the bipartisan bill will provide protection and deportation relief for up to three years until lawmakers can come up with a new proposal on the immigration issue.

Crystal Niebla contributed to this report.