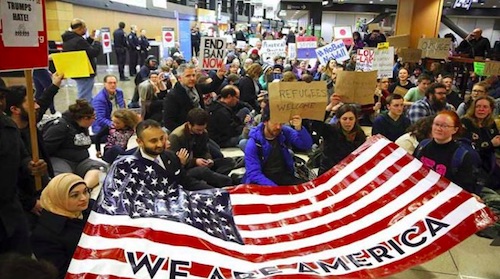 Posted at 17:28h in Immigration, National, Politics by RPadmin 0 Comments 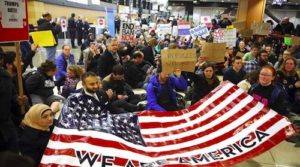 SAN FRANCISCO – Immigrant rights advocates are hailing Thursday’s ruling by the Ninth Circuit Court of Appeals in San Francisco, which refused to reinstate President Trump’s ban on travelers from seven majority-Muslim countries. But they are also bracing for a prolonged legal fight with the White House.

Trump, who tweeted after the ruling, “SEE YOU IN COURT!,” now has the option to appeal to the U.S. Supreme Court.

“This decision means that, for now, people seeking refuge from horrific conditions will not be turned away, that families separated by this discriminatory policy can reunite,” said Sung, who spoke on a national press call organized by New America Media and Ready California this week. “This is a reminder to everyone: our Constitution protects us all, and no one – not even the president – is above it.”

But although the decision was lauded as a victory by civil rights groups, it is one step in a long battle being waged by immigrant communities and their allies to defend their rights amid a flurry of activity from an administration just three weeks in office.

Sally Kinoshita, deputy director of the Immigrant Legal Resource Center (ILRC), noted that while the decision is “good news, immigrants in general continue to be vulnerable under a Trump administration.”

The same week the decision was announced in San Francisco, ICE arrested approximately 160 people in a series of sweeps in Southern California. In a statement released Friday, ICE claimed that 150 of those arrested in the five-day operation had criminal histories.

The sweeps were part of what Angelica Salas, executive director of the Los Angeles-based nonprofit CHIRLA, called “President Trump’s ‘new normal,’ where criminalizing and dehumanizing immigrants is convenient to violate their due process and facilitate their deportation.”

Even the definition of “criminal” has been expanded since President Trump took office.

In an executive order signed Jan. 25, Trump dramatically expanded the groups that are prioritized for deportation to include anyone who initially entered the United States without documents; anyone with a final removal order; anyone charged with a criminal offense (even if the charge was dropped); and anyone who committed a crime (even if they were never charged).

“What that means in many cases is that there really aren’t priorities, that anyone could fall into the net,” said Kinoshita.

Rights that can’t be taken away

As a result, legal experts say it is more important than ever that individuals know their rights under the U.S. Constitution.

“There are certain rights rooted in the Constitution that Trump cannot take away,” explained Grisel Ruiz, staff attorney with ILRC.

Constitutional rights protect everyone in the United States, regardless of their immigration status. These include the right to remain silent, the right to not open the door to agents without a warrant signed by a judge, and to not sign anything they don’t understand or that isn’t true.

“What the immigrant community needs to know,” said Kinoshita, “is that their rights haven’t changed.”

Meanwhile, some state and local governments are stepping up to protect the rights of immigrants in their communities.

“California has been a leader,” said Ruiz, noting several bills that have been introduced in the legislature to protect immigrants.

Senate Bill 54 (the California Values Act), introduced by Senate President pro Tem Kevin de León (D-Los Angeles), would prevent state and local resources from being used to cooperate with deportations. Assembly Bill 3, by Assemblymember Rob Bonta (D-Oakland) would provide resources and training to California’s public defenders. Senate Bill 6, by Sen. Ben Hueso, D-San Diego, seeks to provide attorneys to individuals in immigration proceedings. (Although individuals have the right to an attorney, they are not currently provided a public defender.)

While Trump has railed against “sanctuary cities,” threatening to withhold federal dollars, Ruiz noted, “Cities and counties have no legal obligation to enforce federal immigration law.”

Sung of NILC, which has been at the forefront of the legal challenges to the travel ban, said Trump’s executive orders “aren’t just an affront to our Constitution; they are an affront to our American identity.”

Still, she said, she is encouraged that the pushback against Trump’s executive orders has been so widespread.

Nearly 100 businesses, mostly tech companies, signed on to an amicus brief in support of the suit brought by Washington and Minnesota. The brief called the travel ban bad for business and the country. Other friend of the court statements were filed by faith organizations, former members of the military, former attorneys who worked for the Department of Justice and refugee rights groups.

“The backlash against these executive order has been swift, it has been diverse, and… it gives me tremendous hope personally,” she said. “No one has seen a mobilization like this before in defense of immigrants and refugees.”