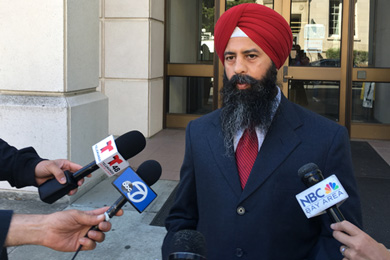 Posted at 22:52h in Immigration, People, Uncategorized by RPadmin 0 Comments 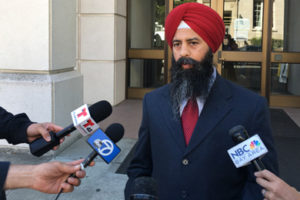 Above: Maan Singh Khalsa speaks to the press following a hearing in Martinez, California, on May 18, 2017. (Julie Small/KQED)

Wearing a slightly baggy suit, a maroon turban wrapped around his head, Maan Singh Khalsa looked across the courtroom at Judge Patricia Scanlon and wiggled his right hand.

The damage was obvious: Most of Khalsa’s pinky finger was missing.

“My attackers hit me with their fists, knocked off my turban, and yelled, 2018Cut his fucking hair.’ They yanked my hair through the window and used a knife to saw parts of it off. In the course of the attack, as I tried to protect my hair and my head, my right finger was stabbed, and eventually required amputation.”

Khalsa, an Indian immigrant and adherent of the Sikh faith, spoke softly and calmly during the hearing on Thursday. But with those words he was trying to close the book on a hate crime case that gained national attention last fall.

Khalsa was attacked last September on a roadway in Richmond, California, a tough oil refinery town perched on the edge of the San Francisco Bay. Now, on the left side of the courtroom, confined to a cage made of glass and black steel, stood Khalsa’s assailants, Colton Tye Leblanc, 25, and Chase Little, 31.

The episode started on the night of Sept. 25, 2016, when LeBlanc, Little and three other men working for an oil services company pulled up to a stoplight in a Ford F-150 pickup truck. Khalsa was driving a car in the next lane over. Somebody in the truck hurled a beer can at him. Soon the situation turned violent, with LeBlanc and Little, both white men, punching Khalsa, an IT specialist for the Social Security Administration, through his car window.

Then the knife came out.

“Observant Sikhs like me keep our hair unshorn in order to live in harmony with the will of God. Cutting a Sikh’s hair is one of the most humiliating things anyone can do a Sikh,” Khalsa told the court.

Before the assault, he said, “I was so carefree. I considered myself an American like everyone else. I had never worried about being the victim of prejudice. I enjoyed my life fully.”

The violence has been transformative. “When the traffic light turned green I was able to drive away from the attackers, but my life is forever changed,” said Khalsa. Now, he said, “It is difficult for me to go out in public.”

Khalsa said he has suffered short-term memory lapses, depression, bouts of anxiety. He said he has trouble typing and using his right hand in general.

After Khalsa shared his story with the court, LeBlanc and Little pleaded no contest to aggravated assault and hate crimes charges. Neither man offered an apology.

Scanlon handed each of them a three-year state prison term, with any restitution payments to be discussed at a later court hearing. It was a negotiated outcome, a deal struck by defense attorneys and County Prosecutor Simon O’Connell.

Back in November, LeBlanc’s attorney, Joseph Tully, dismissed the notion that his client targeted Khalsa due to Khalsa’s ethnicity or religion. “This was simply a fight over a beer can at a stoplight which can’t be elevated to a hate crime under any circumstance,” he said at the time.

Now, even as LeBlanc and Little prepared for an extended stay in the state penal system, Tully remained defiant, claiming to have amassed evidence essentially clearing his client and portraying Khalsa not as a victim but an aggressor, who had used his car as a weapon at some point in the altercation.

“I’ve laughed every time I’ve heard that,” responded O’Connell, the prosecutor. “The defense kept saying they were going to present all this exonerating evidence, but then they turned around and quite readily agreed to plead to the charges.”

Though Khalsa “might have panicked” while behind the wheel, he didn’t do anything malicious, said O’Connell.

For O’Connell, the conviction of LeBlanc and Little represented a significant victory.

Hate crime cases are especially challenging for prosecutors, who must prove not just that a defendant has committed a crime, but that he or she was motivated by animus towards the victim’s race, religion, nationality or other identity characteristic. In 2015, California prosecutors secured convictions on hate crimes charges in less than 50 percent of the cases they filed, according to figures compiled by the California Department of Justice. O’Connell’s colleagues in the Contra Costa district attorney’s office dropped hate crimes charges in another high-profile case, the murder of Will Sims, an African-American musician who was beaten and shot to death in November 2016 after a dispute in a bar.

For Khalsa, the morning in court was an opportunity to live out the principles of his faith.

At one point he looked directly at his assailants:

“As a Sikh, I believe that all of us are one human family, and that we must treat everyone as equals regardless of our many differences. Mr. Little and Mr. LeBlanc, I hope that one day you will come to share this view. I still consider you my brothers, and I hope that you will learn about me and my community, and one day consider me your brother, too.”