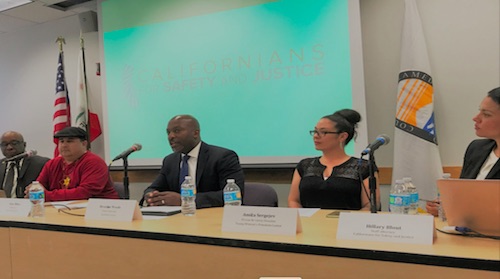 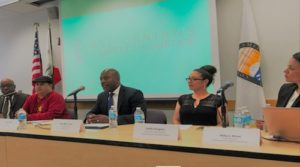 With the Trump administration pushing a tough-on-crime, law-and-order approach to criminal justice reform at the federal level, the work of reducing prison populations may fall to states – and California is ahead of the curve.

In California, among justice reform advocates, the conversation isn’t just around shifting away from mass incarceration. The question now: how to go beyond sentencing reform and do the work of making communities safer and the families within them stronger.

California’s Proposition 47, now in its third year of implementation, has reclassified a set of nonviolent felonies as misdemeanors (crimes like simple drug possession, petty theft, and shoplifting). The law is retroactive, so individuals can apply to have their sentences reduced or their records changed, and the savings from a reduced prison population are to be used for crime prevention measures, like mental health and drug treatment programs.

According to Hillary Blout, a staff attorney with the Oakland-based nonprofit Californians for Safety and Justice, more than 18,000 fewer people are incarcerated due to Prop. 47, and a quarter of a million Californians have applied to have their criminal records changed.

Prop. 47 has come to represent a monumental shift in a country with the highest incarceration rate in the world, where 1 in 12 adults are saddled with a felony conviction, Blout says. And there’s now more than $103 million in savings to be allocated to community-based crime prevention programs around the state.

It’s funding for which there is a dire need, according to Blout – more than 80 percent of California counties have no residential drug treatment programs, for example.

Alameda County Public Defender Brendan Woods says that California’s focus on prevention and treatment provides a deep contrast to the approach at the federal level. Attorney General Jeff Sessions recently instructed federal prosecutors to pursue the most serious charges they can in their cases, and doubled down on harsh sentencing measures like mandatory minimums.

Amika Sergejev is the director of prisoner re-entry at Young Women’s Freedom Center in San Francisco. Sergejev herself was paroled about two years ago after having served seven years in state prisons.

When she paroled, she needed a couch to sleep on and ended up in the Bay Area because of family. As a condition of her parole, she was required to go into a treatment program where she was the only woman in a group of men who were primarily there for help with anger management. “As a female that had been through all kinds of trauma in my early life, I was required to sit in a room full of men working through their issues,” she says, pointing to the broader need for more comprehensive re-entry services that are tailored to the needs of different populations.

While Sergejev now has a job working in re-entry, she says, “My case is a special case, and I’m blessed and lucky, but this is not what everyone’s re-entry looks like. Quite often we’re dealing with the systems that got us into prison in the first place – a lack of housing, continual struggles with poverty, drug addiction.”

These sorts of barriers impede public safety rather than improving it, Blout says, by increasing the odds that individuals will reoffend. The state’s overall recidivism rate hovers at around 65 percent.

The Alameda County Board of Supervisors and the Oakland City Council have declared that June is “Second Chances Month,” and has announced a series of events that will provide people with felony convictions with re-entry services like employment assistance, as well as legal assistance with reducing or expunging criminal records that fall under Prop. 47. One such event will be the Oakland Family Festival on June 24th at Sunnyside Park.

Of the $103 million in savings to be distributed, Alameda stands to receive some $6 million, which the county’s Health Care Services Agency will use for a new re-entry program focused on people with mental health and substance use disorders.