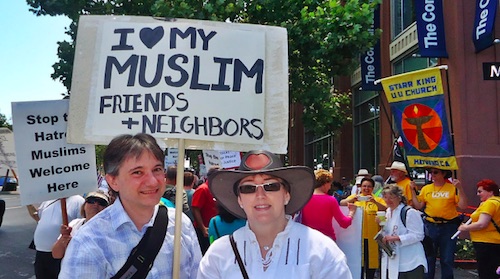 Posted at 17:37h in Uncategorized by RPadmin 0 Comments 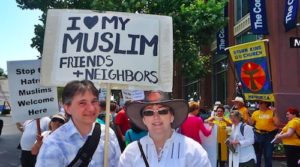 On a bright and windy morning last Saturday, Esther and Neal, a middle-aged couple, drove 60 miles from Richmond to San Jose to express their solidarity with Muslim Americans. They were motivated to come after hearing about the rally a group called ACT for America (AofA) were organizing against Sharia Law in the U.S.

“This was really important for us,” said Esther, “to say ‘No’ to the hate mongers. As Jews, we can never forget the holocaust legacy. We have to reach out to our fellow Muslims to make America safer and stronger.”

But the couple, holding up signs that read “Another Jew for Love,’ was also curious to know from me – a Muslim – what percent of Muslim Americans (about 3.3 million, or 1% of the population) wanted Sharia Law (traditional Islamic law) in the U.S.

“I know of no Muslim who wants Sharia Law,” I said. “We love the U.S. Constitution.”

“That’s what we thought,” said Neal.

Bay Area Muslims have been bracing for the anti-Sharia Law protest for weeks. It was the quintessential straw man, a conduit for anti-Muslim hysteria by Islamophobes and White Supremacists emboldened by President Trump’s anti-Muslim policies.

We were tense and stressed as dawn broke but when we showed up at the intersection of Santa Clara and San Jose on Steven’s Creek Boulevard on Saturday, June 10, our fear dissolved and hope filled our hearts. Supporters, brought together by over 130 diverse organizations from all faiths and of all ages, easily outnumbered the AofA protesters – I counted about 40 of them – by at least 20 to 1.

“I am a writer,” said Esther, as we reflected on the sad state of America today riven by divisions, inequality and hatred. I made a mental note of the book she had written.

The sidewalks along Santa Row resounded with chanting.

“When Muslims are Under Attack, Stand Up and Fight Back!”

“Say It Loud, Say It Clear, Muslims Are Welcome Here!”

Victoria, in her ‘60s and affiliated with the Trinity Episcopal Church in Menlo Park, showed me how she had used the malleability of the English language to turn a negative slogan into a positive message. “I saw this poster at an anti-Muslim rally that showed a brick wall on which was written ‘No More Muslims.’ I simply changed it to ‘Know More Muslims!” she said, beaming.

Abigail, seven, and her two year old brother Theo, conveyed to the rest of America and to the world this message: “Stop the Hatred. Muslims Welcome Here.”

For Martin of San Jose, it was a moral imperative to attend the rally in support of Muslims. “We cannot wait for Internment camps. I heard some politicians talk openly for Muslim Internment camps after the Manchester attack.”

A large number of Japanese-Americans, descendants of Internment Camp survivors during WWII, held up signs that stated in bold red letters, “We Stand for Inclusion.” The statements were imprinted on images of the “Instructions to All Persons of Japanese Ancestry” manual that was handed out to their parents and grandparents during their Internment.

Across the street, among the anti-Sharia Law protesters, there was a man with a poster that read “Sharia Law: No. US Constitution: Yes.” I wanted to ask him if he knew of a single Muslim American who wanted to impose Sharia Law on America. But when I checked with a policeman, he wisely advised me not to.

What I noticed was that in this month of Ramadan, fasting Muslim volunteers were distributing water bottles to thirsty people, and that included those rallying against us. Nothing captured for me the spirit of Ramadan more than this simple and poignant gesture.

The posters were pithy and precise. Tara of San Jose: “Honk if you love you Muslim Neighbor.” Honking along Stevens Creek was indeed deafening Saturday morning.

Chris of Palo Alto told me her daughter Michelle, 10, insisted on accompanying her after she heard about the event and wished upon all of us: “Shabbat Shalom. Ramadan Mubarak.” We are also in the midst of the Jewish observance of Sabbath.

Charles and Tori, members of Showing Up For Racial Justice(SURJ), declared, “I Love My Muslim Neighbor.” Jay, of Muslim-Jewish Solidarity Alliance, advised, “Resist Hate.” A San Jose family declared: “We stand with Our Muslim Neighbors,” and implored “Unity.” Tim, of Congress of Resistance, advised: “Unite to Fight Against Racism and Bigotry.”

For Steven, what was at stake was nothing less the future of democracy in America. “We cannot accept What Trump is trying to do to America,” he said. “We have to stand up for what we believe in and fight for our values for as long as it takes.”

For Sister Elizabeth, it was to stop the encroachment of what she saw was the unmistakable sign of fascism in America. Her poster said: “In the Name of Humanity, He Refused to Accept a Fascist America.” It showed the image of Taliesin Myrddin Namkai Meche, who lost his life at the hand of a White Supremacist in Portland when he came to the defense of two muslim girls.

After a while I simply began reading the signs for my own edification and inspiration:

“End Terrorism by Not Participating In it”

“First They Came for the Muslims and I said, Stop Right There!”

Particularly moving for me was the message conveyed by the word “MUSLIM” on the T-shirt of a woman holding a banner with 2 other Americans of “Indivisible San Jose.” She had highlighted “US” in “MUSLIM.” It could stand for “US” as in, we are all in this together, and it could also stand for the United States. I never thought of my faith label that way, and I would have never discovered it if I hadn’t come to the rally. With awe and wonder, I realized that in the most unexpected way, I had redeemed my fasting!

When I returned home that night after performing the special nightly Ramadan prayers called ‘Taraweeh’ at the Evergreen Islamic Center, the images of diversity and inclusion and love and courage still fresh in my mind. It was past midnight. But I had one more thing to do before turning it in. I turned on my laptop, went to Amazon’s website and ordered a book called “Nest,” a book about the power of healing and friendship, by an author named Esther Ehrlich.

New America Media is partnering with the Documenting Hate Project, a collaborative of media outlets, civil rights groups and tech companies nationwide working to document the rise of hate crimes and incidents of bias or harassment in the United States since the 2016 election. If you have experienced or witnessed a hate crime or incident of bias or harassment, you can use this form to send information about the incident to the Documenting Hate Project. The form is not a report to law enforcement or any government agency. It will be used as part of a national database for use by journalists, researchers and civil rights organizations. Read more of NAM’s reports on hate crime and hate speech here.