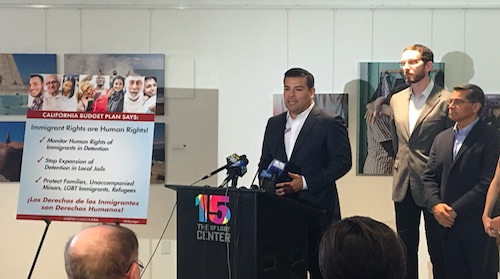 Posted at 19:21h in California, Immigration by RPadmin 0 Comments 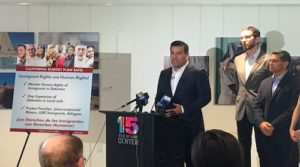 The 2017 budget bill that California legislators approved on June 15, 2017 has a measure to increase oversight of California’s immigration detention facilities. “California becomes one of the first states to empower our Attorney General and the Department of Justice to really look at what’s happening and what are the conditions in these detention centers,” said Senator Ricardo Lara at a press conference at the LGBT center in San Francisco.

California’s Attorney General, Xavier Becerra, re-iterated how California sets trends for the rest of the country. As the chief law enforcement officer in the state of California Attorney General Becerra declared that his primary responsibility is to uphold the law. “And so, I’ll be able to go out there and make sure that people who are being detained are being detained for the right reasons, that the conditions of their detainment are appropriate,” remarked Becerra stressing that in California, regardless of which country an immigrant comes from, all people have a right to be respected, even when detained.

The budget gives the Department of Justice direct authority to review public and private immigration detention centers and to give an assessment and present a report to the legislature. Becerra cautioned Immigrations and Customs Enforcement (ICE) officers not to refuse access to any inspections, since all facilities require licenses to operate in the state of California.

All detention facilities must conform to existing statutes and regulations and standards of operation, Becerra said, and if there are any violations, “there usually will be provisions for enforcement actions against those violators and penalties for those who violate those standards.”

The budget bill places a moratorium on public detention immigration contracts. “We’ll still have those detention beds in Contra Costa and Sacramento and so many other facilities that exist today. So, [the bill is] just putting a freeze on those facilities,” Grisel Ruiz, staff attorney for Immigration Legal Resource Center, explained. Any existing contracts as of June 15, 2017, which is the date laid out in the budget bill, will continue to operate as usual.

California has the second-largest number of immigrant detainees, after Texas, housing close to four thousand detainees. California has nine immigration detention centers with the facilities at Bakersfield, Sacramento, Yuba County and Contra Costa affiliated to the San Francisco immigration court.

“Let’s not be fooled,” Lara said, “they are called detention centers, but they are really prisons or jails. We are talking about bars, we are talking about limiting individual freedoms and a whole number of issues with treatment, the humane treatment of our immigrant communities.”

At Adelanto Detention Center, a privately-run facility in San Bernardino County, three deaths were recorded since March of this year making it “the deadliest detention center of 2017,” according to Javier Hernandez of Inland Coalition for Immigrant Justice.

A group of immigration detainees launched a hunger strike on June 12 and ended it two days later at Adelanto. Christina Mansfield, co-founder and executive director of Community Initiatives for Visiting Immigrants in Confinement (CIVIC), talked about her client Sarah Salcido, a detainee who informed her that she along with thirty-two other women were joining nine men on a hunger strike at Adelanto “to protest the unjust conditions of their confinements.” Among their demands were better medical treatments and to reduce the unusually high bond amounts that immigrant inmates were required to pay in order to join their families. The women pulled out of the strike because they felt that the officials were making an attempt to address their concerns, according to Mansfield, but not before “the prison guards drenched the men, pepper sprayed and beat them and took them into a high-security unit of the facility. The women were also threatened with the same.”

CIVIC gathered data on sexual and physical assaults in detention and found that in the last six years, Homeland Security’s Office of the Inspector General received over 33,000 complaints of sexual or physical assaults against DHS agencies and less than 1% of these complaints were subsequently investigated. If the federal government won’t regulate these detention facilities, it’s time for the state of CA to do so, declared Mansfield.

LGBT immigrants face even more harassment and violence while being detained. Roberto Ordeñana, the LGBT Center’s director of development and marketing, thanked California’s legislators for choosing compassion over cruelty. “The review of conditions in immigration detention facilities that really are jails and the budget action being presented today is one significant step towards ensuring the safety of LGBT immigrants in detention, particularly transgender women who are often jailed with male inmates, denied access to healthcare and forced into isolation,” Ordeñana said.

The Trump administration has announced their intent in detaining and deporting more immigrants. Thomas D. Homan, acting director of ICE informed the House Appropriations Committee on June 13 said that he needs more detention beds because of the increased enforcement activity. “If you’re in this country illegally and you committed a crime by being in this country, you should be uncomfortable, you should look over your shoulder. You need to be worried,” Mr. Homan stated.

“What kind of message are we sending to the country?” Senator Lara asked referring to Homan’s statement. “This isn’t North Korea, this isn’t Central America. This is the United States of America where everybody deserves to have dignity and respect…”