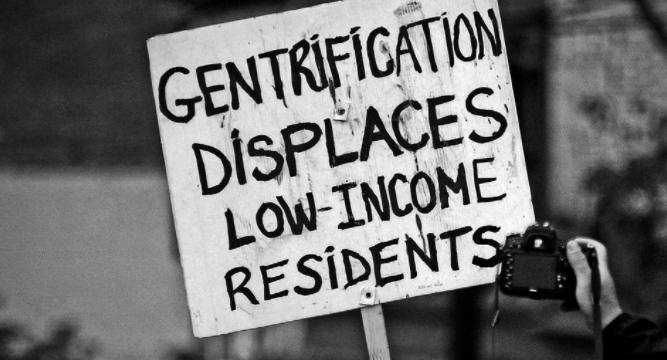 Posted at 13:50h in Neighborhoods, Youth by RPadmin 1 Comment 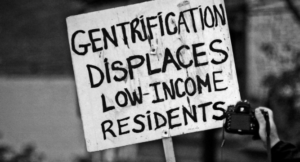 Gentrification is defined as “the process of renovating and improving a house or district so that it conforms to middle-class taste.” But to many poor people of color, it’s essentially when white people come to our communities and, for better or worse, change these communities.

There’s no question that gentrification is happening in the Bay Area and here in Richmond and there will be many more white people moving to neighborhoods that have long been filled with people of color. But what does that mean to the people who already live here? Will Richmond be a safe haven for both longtime residents of color and new white residents?

Many young people of color are wary of this situation. Some, like 17-year-old Richmond resident Gabriela Martinez, say minorities are already starting to leave the city.

“I see it in my own household,” said Martinez. “The way prices are starting to rise, it’s affecting not only us but everyone around us, you know, the people who can’t be considered middle class.”

“The prices of everyday things are increasing,” she said. “Eventually so will housing, and people like us, the minorities, will once again retreat to the cheaper areas.”

With gentrification, white families end up prospering in areas they once would never have set foot in; and the families who lived here all their lives end up being forced to move back to square one: poverty.

Amy Maria, 19, who lives near Hilltop, says she believes that soon poor people won’t have anywhere to go and will feel intimidated here in Richmond, forcing them to seek refuge in the homes of family members.

“White people in general have more power, and they might actually feel threatened by the Latinx and black community,” she said, “so they can easily hit up the police for protection.”

Growing up near the Richmond-San Pablo border, I never really saw white people living in my neighborhood, just Latinos, Asians and African Americans. Seeing more white people in my community would make me wonder who got pushed out in order for them to move in, and if my family will be next.

Díaz-Noriega shares my opinion, calling gentrification a “modern form of the colonizing that took place in the Americas.”

“Gentrification looks like less people of color living on my street. Coffee shops and businesses not owned by people from Richmond. Homelessness. Rent going higher, and not affordable for POC [people of color] to live, so they get kicked out,” she said.

But some young people believe that gentrification will make Richmond a safer place.

Devi Grace Laplana, 17, doesn’t see a problem with new people moving in, although she acknowledges that, “poor people will have to move into other unacceptable places because rich people will take away their home.”

In her opinion, though, the city of Richmond itself will prosper.

“I think that they’ll make it a safer place for the people,” she said.

Samantha Gray, 18, is white and enjoys the fact that Richmond is minority- majority city.

When it comes to more white people moving to Richmond, she believes many are well intentioned but she worries others are “just snooty and look down on everyone or the city to blame.”

“Why choose to come here?” she wonders.

Andre Aikins, 46, who is looking to move back to Richmond, says while gentrification is driving the home prices up in Richmond, focusing on whites moving to Richmond is not the answer.

“It’s not about them. They are going do what they do,” he says. “The city has changed and it will continue to. My concern is with our people. When are we going to read the writing on the wall and get mobilized and educated? We have to fight for ourselves; no one is going to fly down and save us.”

All in all, many see gentrification as a double-edged sword, bringing both benefits and disadvantages. But do the pros outweigh the cons?

I fear that if more and more people keep coming, there could be tension between the races and segregation in the city, with “colored” parts of Richmond and “white” parts of Richmond that are full of middle-class people. One thing is certain: I can feel the city of Richmond changing, and we’re definitely witnessing the birth of something new.