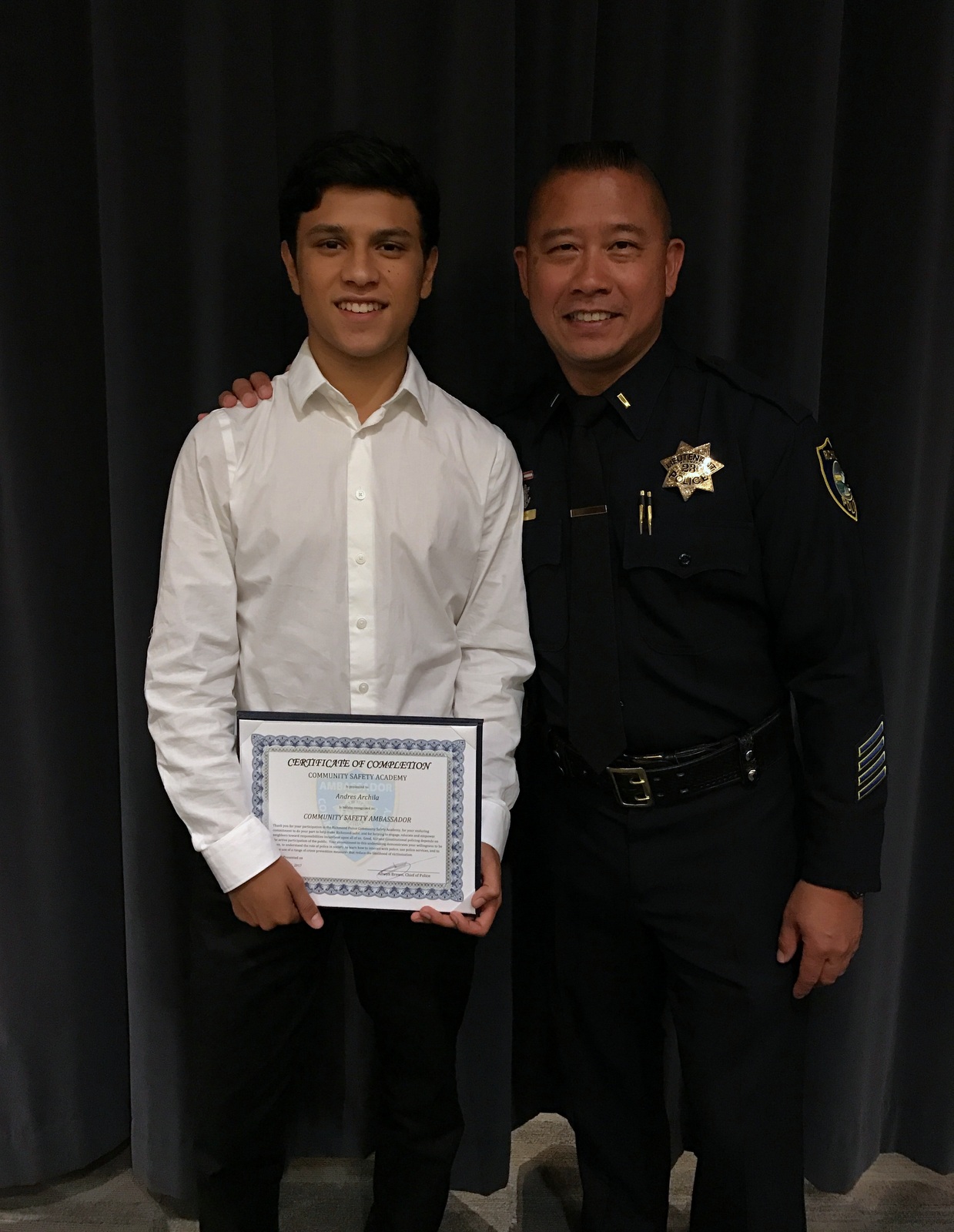 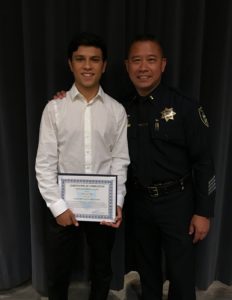 Richmond resident Andres Archila, 17, says he has a new perspective on policing. Archila was one of 25 graduates recently honored at the first-ever graduation ceremony of the Community Safety Academy, an eight-week program led by the Richmond Police Department.

He is now a community ambassador for the police department, a title he says he’s proud to have.

“One of my mom’s friends read about it on Nextdoor and she printed it out for me and I thought it was very interesting,” said Archila, who just finished his junior year at St. Mary’s College High School in Berkeley. “I was interested in seeing what our Richmond police were doing to help the community.”

Archila has lived in Richmond all of his life and says he has seen crime go down in his neighborhood.

“When I was younger, I remember seeing a lot of violence and illegal stuff going on. Now I don’t really see that happening. At least in my neighborhood it doesn’t happen as much,” he said.

The 17-year-old never thought about what it was like to be a police officer. Now he says he has an understanding that he wishes more young people shared.

After going through the eight-week program, led by the Richmond Police Department, he was able to get a closer look at Richmond’s community policing efforts. The program teaches residents different aspects of policing, like how cases are filed, crime prevention tips, force option training and community policing philosophies adopted by the department.

“We want people to know what the police department does,” explained Lt. Felix Tan. “What police officers do on a day-to-day basis and how things work within the department.”

Tan said the main goal is to empower residents with crime prevention tactics and tips they can share with their friends, family and neighbors.

“We want them to be advocates for us and ambassadors for the department. To explain to people what the police officers can and can’t do on a daily basis,” he said.

Yenny Garcia, a current member of the city’s police commission and one of the graduates, took part in the academy to learn from their side of things.

“I wanted to ask many questions I had about the policies at the department, how they enforce them and why,” said Garcia.

“As a community member in Richmond, my interactions with police weren’t always pleasant and family members had doubts that also made me have questions,” she said.

Garcia says she appreciates the officers leading the class, listening to her concerns and answering questions as much as they could. She believes the academy was a great conversation starter between Richmond’s Latino community and police officers in a different setting.

“I’m hoping that the concerns that were voiced during the class are looked into and together we can continue to have the healthy Richmond we all deserve.”

One of Archila’s favorite parts of the academy was when city attorneys led a class about basic law, including topics like reasonable suspicion, the difference between a felony and a misdemeanor, and what a cop has to have before they arrest you or stop someone.

In another class, the group acted out situations that police could find themselves in on the streets.

“That’s the one that really opened my eyes to how difficult being an officer is,” said Archila. “If everyone were to take that little simulation, I think everyone would understand.”

Archila says he thinks efforts like this can help improve the relationship between the police and the community in Richmond.

“I’ve always had respect for law enforcement. I find it to be a really hard job,” he said.

“But I also believe there are bad cops, and I know there’s a lot of shadiness going on between them, ‘cause they have power, and sometimes bad cops like to abuse it. So I do understand when people hate on cops, but I like to always have respect for them, and be open minded.”

Archila was surprised to learn that the Richmond Police Department has become a model for a lot of cities in the United States in community policing.

“I would never expect that because Richmond is a small city,” he said.

“I had respect for them, but then when I took the class, it made my opinion of police [grow] stronger. I gave more respect because I realize how hard of a job it is,” he said.

But he isn’t sure the message is getting to young people.

The academy is open to residents 16 years and older. But as he looked around the room the first day, Archila quickly noticed that he was the youngest person in the group. Most of the others were older adults. He thinks that if more young people went through the academy, they would realize being a police officer is not as easy of a job as they thought.

“When they’re gonna arrest somebody or shoot somebody, they have to decide in the blink of an eye what they want to do. So they don’t have that much time, and then people judge them really hard, but in reality, they’re gonna have to make quick decisions for their safety and [the safety of] others,” he said.

“A lot of kids my age just completely hate the cops. They don’t even imagine themselves calling them for help for anything, unless it was very serious.”

Archila says he thinks the Community Safety Academy creates greater understanding between many in the community and the police.

Tan agrees. “We already have a good relationship with our community but we want to make it even better,” said Tan. “We can’t fight crime by ourselves alone. It takes a whole community to do that.”