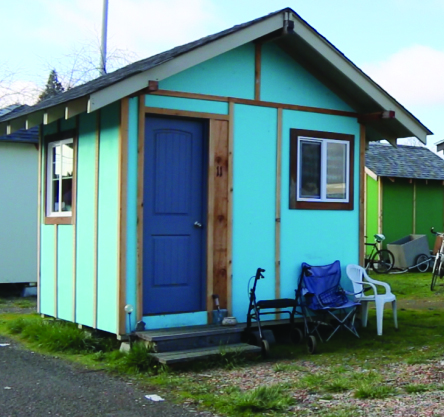 Posted at 03:44h in Politics by RPadmin 0 Comments 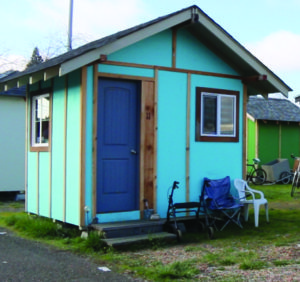 Above: A tiny house at Opportunity Village, a micro housing project in Eugene, Oregon. Photo via occupyeugenemedia.org

Tiny houses may soon pop up in Richmond as temporary housing for the city’s homeless population.

The city council voted unanimously to direct staff to develop a plan for a pilot program, which would run for 12 months and allow for up to six tiny houses on wheels to be located throughout the city.

The occupants of these units would be limited to individuals recognized as homeless by Contra Costa Health Housing & Homeless Services.

“This would enable anybody that wants to try this out, see how it works and if it’s feasible,” said Mayor Tom Butt, who sponsored the ordinance. “If it is feasible, we can work the bugs out of it and it might become a part of an overall strategy to increase transitional housing for homeless people.”

There’s no cost to the city, Butt said, as residents, organizations and businesses could construct the tiny houses and make them available to a homeless person. There is one tiny house that was built by UC Berkeley students and is located at UC Field Station that might become available for this program.

Under the ordinance, the tiny houses could be located in any zoning district where residential uses are allowed, with or without a conditional use permit.

“If this passes, I’m considering putting together a group of volunteers to fund a build for one of these [tiny houses]. I’m also thinking of challenging other organizations and businesses in Richmond to do the same thing,” Butt said.

According to the Contra Costa Council on Homelessness 2017 count, in January, there were 1,607 homeless people in the county, with 696 living in shelters and 911 in encampments, cars, parks or abandoned buildings.

The 2017 count also revealed that 198 people who lost their permanent housing in Richmond were unsheltered in various areas of the county.

The tiny house movement is spreading throughout the country as a quick and cost-effective way to combat homelessness. And as rents continue to skyrocket throughout the Bay Area, the tiny houses — many built from recycled materials – may be a better solution than tent encampments. While traditional shelters are one way to ensure homeless can get off the streets, they often fill up quickly and require people to leave the premises during the day, leaving no place to store their belongings.

“Homeless people need more than a safe place to sleep and keep dry,” said Councilman Eduardo Martinez. “They also need a place to eat, to bathe and clean themselves. I’m hoping that as this ordinance develops that we consider those aspects also.”

While some logistics will have to be worked out (such as the qualifications for who would be selected to live in one of the tiny houses on wheels, and the length of stay), the ordinance unanimously passed the first reading and will go before the city council again for final approval in August.

Outgoing Richmond City Councilwoman Gayle McLaughlin voiced her own support for the ordinance. “I definitely support this,” McLaughlin said. “I think we need places for homeless people to live and I hope we can get those volunteers to build it and to donate materials.”