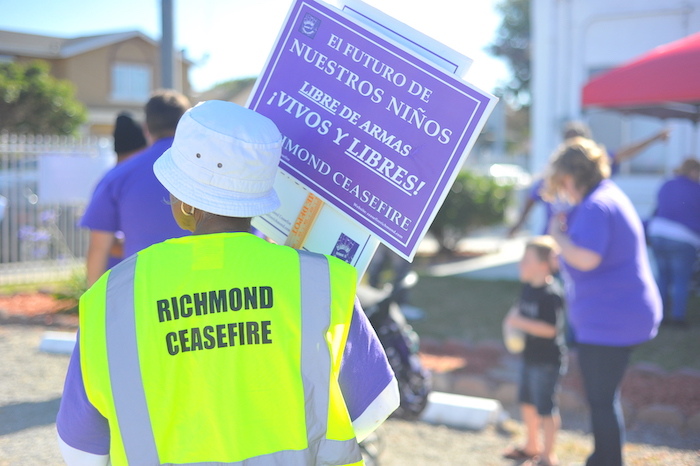 Posted at 17:42h in Arts and Culture, Neighborhoods by RPadmin 0 Comments

Here in Richmond, we never forget the people who suffer at the hands of gun violence. Many of us have lost friends and family members. Too many young people have had their lives cut short.

For families whose lives have been touched by violence, the Richmond Ceasefire Walk is a way to come together, grieve and cope as a community.

At Ceasefire’s recent citywide night walk, a group of residents gathered at New Hope Missionary Baptist Church in North Richmond and then took to the streets, stopping at different locations throughout the city before ending at Miracle Temple Church on Cutting Blvd.

Among the participants were grieving family members as well as neighbors who just wanted the violence in Richmond to end. As the group walked through the streets holding signs and shouting, “Ceasefire!” and, “Alive and free!” cars passed in both directions, acknowledging the effort and honking their horns for peace.

The walk was also a chance to remember those who had lost their lives.

“I’ve been praying and crying for some comfort,” said Marie Robinson Ward, 58, who recently lost a second nephew to gun violence. “It’s very hard to get over because that was not the first of my siblings who lost a child. My brother lost his son about a block away from where this nephew was lost,” she said.

“We talked two days before he passed, and I hear that conversation over and over again. Just laughing and joking,” she said. “It’s amazing how you can go from happy and carefree to sad and heartbroken in just one day, with just one pull, just one action, an entire family can be torn apart.”

Ward said being part of the walk helped her find justice for her fallen family members, and she prays for families who are suffering from the effects of gun violence.

Other participants, like Najari Smith of Rich City Rides, said that the night walks are a good way to activate the community for peace.

“You have all these individuals from different neighborhoods,” said Smith, “collectively calling for an end to violence.”

If you are interested in joining the next annual Ceasefire walk, look up Richmond Ceasefire on Facebook. 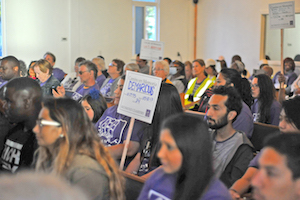