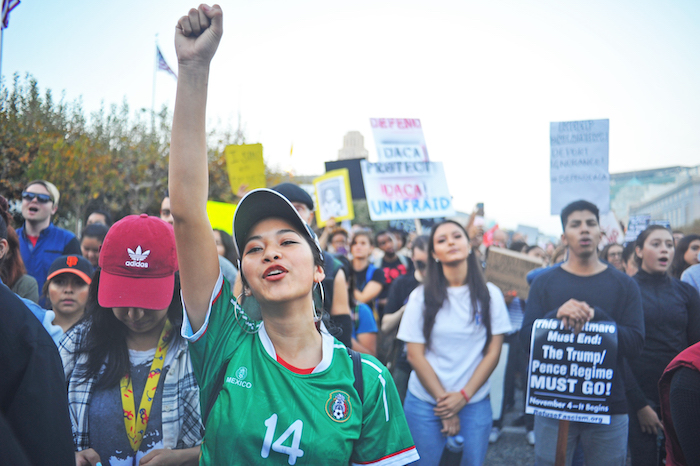 Posted at 21:57h in Immigration, Politics, Youth by RPadmin 0 Comments

Above: Marcher Tonatich Beltran raises her fist in the air as she chants for a speaker during the closing rally of an impromptu protest against the phasing out of Deferred Action for Childhood Arrivals program at City Hall in San Francisco on Sept. 9.

SAN FRANCISCO–The end of the Deferred Action for Childhood Arrivals program could negatively impact the economy, but experts say the livelihoods of the recipients are the real reason people should push to defend DACA.

Studies show the positive impact that DACA has had on the economy, but the reason it really matters is that it has had a positive impact on people’s lives, UC San Diego Professor of Political Science Tom K. Wong said during a national press conference hosted by New America Media and Ready California.

DACA was launched in 2012 by President Obama to protect from deportation young undocumented immigrants who were brought to the country as children. It also allows them to get a work permit so they can work legally in the country.

Almost 800,000 young people have benefited from the program, many of them in California and Texas.

On Sept. 5, Attorney General Jeff Sessions announced that the Trump administration was rescinding the DACA program.

DACA as of now

USCIS is no longer accepting any new DACA applications.
However, all current DACA recipients are still protected from deportation and able to work legally until their work permit expires.

Although new applications are not being accepted, recipients whose DACA work authorization card expires in the next six months (by March 5, 2018) are able to renew – as long as they do it by the deadline of October 5, 2017.

Anyone with an expiration date after March 5 can’t renew.

Quiroz said he was able to pay for school out of his pocket, thanks to a higher paying job he acquired with DACA.

He also no longer feared deportation, something that was a constant fear growing up. At the age of 15, Quiroz was notified that his older brother, had been deported. Two years later, his father was deported and most recently his mother was deported.

Quiroz said the most tragic part of being separated from his family was that when Quiroz’s brother was murdered in Mexico, there was no way he could attend the funeral.

Now that DACA is ending, Quiroz said, “I am unsure what my future looks like.”

Quiroz said he trusted in the government enough to openly decide to oust themselves from the shadows. DACA recipients like him accepted trading their personal information, including a background check, $465 and the security of being under the radar, for a Social Security Number, access to a work permit, identification like state IDs and protection from deportation.

Now Quiroz says he is having trouble trusting the government and is looking toward the community to find support and a way forward.

The fight for DACA

Immigration Policy Advocate Ignacia Rodriguez said the National Immigration Law Center and other groups are taking the Trump administration to court to challenge the administration’s decision to end DACA.

“Specifically we are arguing that the Trump decision to end DACA violates federal law,” said Rodriquez.

“The government did not put forth an adequate rational for reversing the policy, erroneously claiming that this is in conflict with immigration law. So the government’s insufficient justification for its policy change is in violation of the APA [Administrative Procedures Act],” she said.

“Second, the decision to terminate DACA also violates the Constitution’s Equal Protections Clause which prohibits discrimination on the basis of race, ethnicity or national origin,” she said.

Fifteen states and the District of Columbia have also joined a lawsuit against the Trump administration, arguing that the decision violated the due process right of DACA recipients by failing to “safeguard” personal information, said Rodriguez.

The fight for DACA, she said, isn’t only taking place in the courtrooms, but also out in the community and in Congress.

Rodriguez called on people to push for Congress to pass a clean DREAM Act, which would provide young immigrants who have graduated high school, are in college or the military, a path to citizenship.

Meanwhile, Davenport of ILRC advises DACA recipients to get a legal consultation to see what options they have now. But fraudulent legal providers can take advantage of moments like this, , she warned, so recipients must be sure to seek only qualified legal services providers.