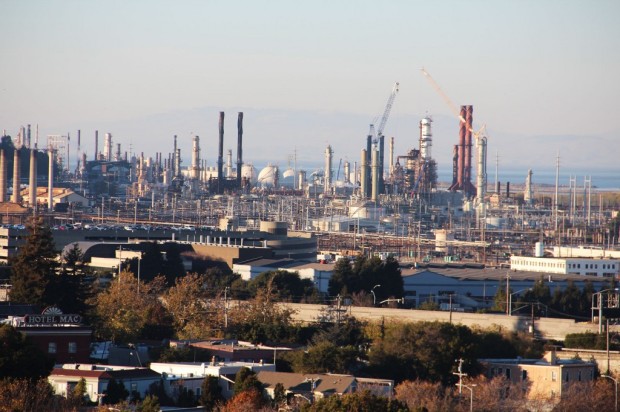 24 Dec Richmond: The Center of a Toxic Debate 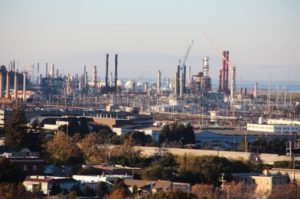 Bay Area oil refineries are facing strict new regulations on toxic air pollution, including a tenfold reduction in the legal limit on how many people can develop cancer due to toxic air contaminants. The lower threshold, however, may not be fully implemented for another 10 years — making activists restless.

While California leads the country in implementing environmental policy — innovating the regulation of greenhouse gas emissions through cap-and-trade — local air districts have as a result lost power over regulating greenhouse gases. Bay Area regulators have instead turned their attention to the immediate health impacts of toxic pollution.

The Bay Area Air Quality Board passed a rule last month limiting toxic emissions from stationary sources, such as oil refineries, cement factories, and even dry cleaners. This affects the Chevron Richmond Refinery, which is classified as a high-risk location, according to Bay Area Air Quality Management District board member and Contra Costa County Supervisor John Gioia. The new rule adds to what is already a complex and contentious emissions regulatory landscape.

Gioia called the new measure “the most health protective toxic measure in the country.”

Polluters are ranked through mathematical equations balancing several variables: air pollutants emitted from the facility that may cause cancer or other serious health effects, the relative danger of the toxins emitted, the proximity of the facility to people and exposure factors for different types of exposed individuals. The five refineries in the Bay Area are all in the high-risk category.

The new rule requires facilities to curb toxic air pollution if their emissions pose a cancer risk to 10 in one million people. The previous threshold was set at 100 people out of one million.

Toxic air contaminants are the only air pollutant that can lead to cancer, in addition to chronic eye, lung or skin irritation and neurological and reproductive disorders.

The facilities have five years to comply with the regulation, Gioia said.  If it is not technically feasible for the facility to reduce the risk during the five-year period, meaning the facility cannot be retrofitted, they have an additional five years to meet the standard. A facility can also be granted an extension if the cost to reduce emissions is more than 10 percent of a facility’s annual profits.

In addition to the option of reducing overall production, another way existing facilities can comply involves moving the source of the emissions away from people by simply moving the source farther from the border of the facility. This tactic is said to improve air quality within about 1,000 feet of the refinery. However, the Iron Triangle, a residential neighborhood in central Richmond, is situated just over 1,000 feet from the refinery.

“We feel all the health consequences — look at census data, there are very few people over 80 in Richmond,” said Ratha Lai, Our Power campaign coordinator for the Asian Pacific Environmental Network.

Approximately two million barrels of petroleum are processed in California every day. The Chevron Richmond refinery processes about 250,000 barrels of crude oil a day, all coming in by ship.

While some toxic emissions have now been locally addressed, new state policy has prevented local regulators from curbing a different kind of emission — greenhouse gases.

Legislators separate pollutants into three main categories: toxic, criteria and greenhouse gases. Toxics are those that can severely impact the health of people living within about 1,000 feet of its source, the kind addressed by the new rule. Criteria pollutants contribute to regional smog and greenhouse gases drive global climate change.

In July, Gov. Jerry Brown negotiated a two-thirds majority in the state senate to extend California’s existing cap-and-trade program, a system that aims to limit greenhouse gases through economic incentives for polluters. Cap-and-trade requires companies such as Chevron to pay penalties if they exceed a cap on emissions, a cap that increases over time.

Brown told legislators that the passage of AB 398 was “the most important vote of your life.”

“This is a very critical situation for the Bay Area, especially for people who live near refineries,” Lai said. “When something does happen, the rest of the Bay area wakes up.”

The restrictions also caused the local air district to oppose the bill unless amendments were made, according to Tom Addison, senior policy advisor for BAAQMD. The cap-and-trade extension passed without these amendments.

Many Bay Area environmental justice activists attribute the passage of AB 398 to intense lobbying in Sacramento from the energy sector and support from key Democrats. Several activists pointed to lobbying from the Western States Petroleum Association, the oldest petroleum trade association in the U.S., as a critical factor in the bill’s ultimate language that allegedly appeased the association.

AB 398 limited local regulating power over greenhouse gases to prevent polluters from moving to districts within the state with looser regulations such as the South Coast Air Quality Management District in Southern California which has its threshold set at 25 people in a million developing cancer.

Lai alleges that the cap-and-trade program doesn’t effectively prevent emissions increases. Instead, he says, it enables deep-pocketed polluters to pay the state for any increases in emissions.

“Communities can’t protect themselves from lobbyists,” Lai said. Lobbyists “can visualize a bar graph with the dollar signs of your health being sold out.”

Activists like Lai say that another influx of lobbyists from Western States Petroleum Association, this time into the Bay Area, has stalled local rules over greenhouse gas emissions.

“The political debate is who has the ability to regulate greenhouse gases,” Lai said.

Without Rule 12-16, however, activists also worry that refineries will have easier access to permits allowing them to expand importation of dirtier crude oils, such as tar sands.

Tar sands require more energy to refine, producing three times more pollution than conventional oil, according to the Natural Resource Defense Council. Burning tar sands creates a substance known as petroleum coke, or petcoke, a particulate matter that, if inhaled, can affect the heart and lungs.

According to Nadel, without the locally set cap on greenhouse gas emissions Rule 12-16 would have provided, projections show that a shift to tar sands could result in “3,000-5,000 excess deaths right around the refineries.”

“It was almost like adding a sixth refinery to the Bay Area,” Nadel said. “If the refineries switched to tar sands, the emissions would blow our environmental goals.”

Alarm over crude oil importation is especially strong within the Richmond community, where corrosion, caused by burning crude oil containing high levels of sulfur, directly led to the Chevron Richmond Refinery fire of 2012 that sent about 15,000 residents to the hospital.

Activists are adamant that cap-and-trade only allows refineries to buy their way out of capping emissions, calling it “pollution trading,” and does not account for the health effects of pollution sustained while cap-and-trade takes effect.

Gioia argues that rules, such as the new toxic emissions regulation, work in parallel with the statewide greenhouse gas reductions expected from AB 398. Activists counter that these rules can’t come fast enough.

“Our communities will be bearing the brunt of the pollution,” Ratha said.