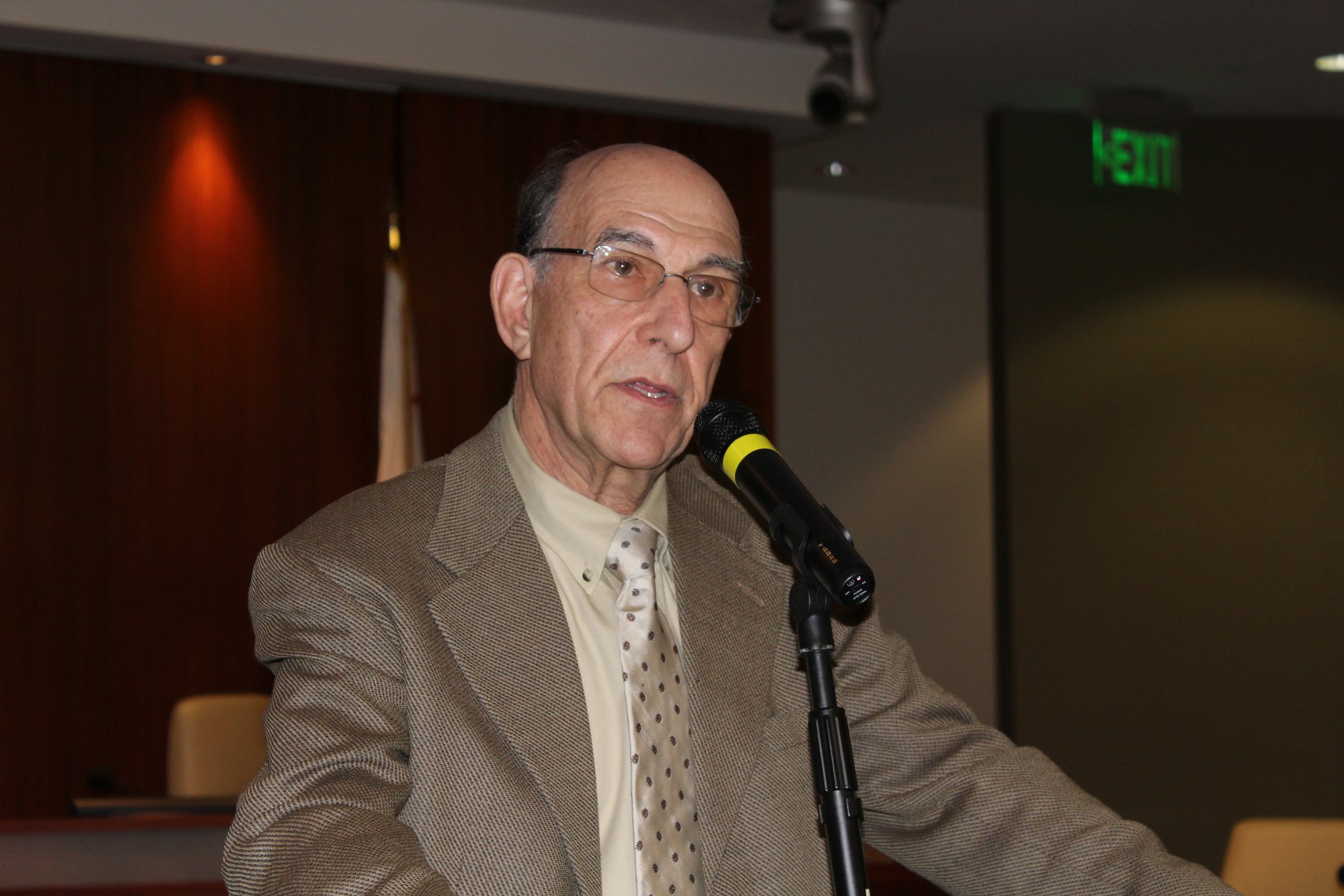 24 Jan Author Discusses ‘Color of Law’ in a Segregated Richmond

Posted at 20:17h in History by RPadmin 0 Comments 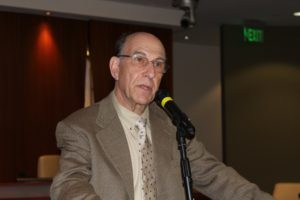 More than 60 years ago, when Ford Motor closed its Richmond assembly plant (next to what is today the Rosie The Riveter WW II Visitors Center), Frank Stevenson was one of 250 African-Americans facing unemployment.

Fortunately, his union, the United Auto Workers (UAW), negotiated an agreement with management permitting all 1,400 UAW members in Richmond to transfer, with their seniority rights intact, to a Ford facility in Milpitas, a then-rural suburb of San Jose.

With the assistance of federal home mortgage guarantees, low-interest loans, and, for WWII veterans, no down payment, many white UAW members easily took advantage of this deal. They found affordable homes in suburban subdivisions then blossoming in the South Bay. However, Louisiana-born Stevenson and other non-white co-workers had far greater difficulty following their work to Ford’s new plant, even though their employment history and level of earnings were similar.

That’s because Milpitas quickly enacted a zoning ordinance, which banned apartment construction and allowed only single-family homes to be built. The latter were off limits to blacks.  Because available housing was so limited, some black autoworkers had no choice but to give up their jobs. Others formed carpools, so they could share the hundred-mile daily round trip down to Milpitas and back to Richmond, a commute that Frank Stevenson made for 20 years.

Housing bias in the suburbs, like race-based segregation of renters and home-owners in post-war Richmond, was no accident, Richard Rothstein explains in his new book, The Color of Law: A Forgotten History of How Our Government Segregated America. 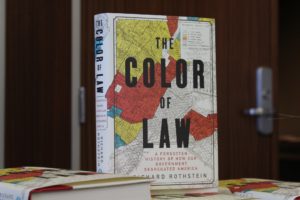 In the book, Rothstein documents how racially segregated housing caused long-term damage to African-American family wealth, income, job opportunities, and access to education. The experience of Richmond Ford workers emerges as a key case study of blacks being left behind in all these areas.

Rothstein, now a resident of Berkeley, was a Students for a Democratic Society leader in the 1960s, later became an Urban League staffer and labor organizer, and then a well-known writer about educational policy issues and columnist for the New York Times. More recently his research for the Economic Policy Institute (EPI), in Washington, DC, and the Thurgood Marshall Institute of the NAACP Legal Defense Fund has focused on the discriminatory impact of past federal housing programs.

On Saturday, Jan. 20, Rothstein drew a large and attentive multi-racial audience in the Richmond city council chambers, where he discussed his findings at an event sponsored by Richmond History Museum and Public Library. As Rothstein writes in his book, based on interviews with workers like Frank Stevenson, one of “the federal government’s specifications for mortgages insured in Milpitas was an openly stated prohibition on sales to African Americans.”  Throughout California, private developers dependent on federal loan insurance would not sell to non-whites — and no state-licensed real estate agent would even show them houses — anywhere that a “mixed-neighborhood” would result.

Even housing co-ops, committed to racial integration, were denied bank loans for new construction and mortgage assistance because “the Federal Housing Administration would not insure locals to a cooperative that included African-American members.”

By the time Ford left Richmond, many of its African-American workers had become so discouraged about the lack of housing opportunities near the company’s new facility that “they formed carpools to share the hundred-mile daily round trip from Richmond,” like the one Stevenson made for two decades.

It was only when Stevenson was close to retirement, in 1975, that he was finally able to buy his first home, moving from North Richmond to a formerly whites-only section of the south Richmond housing market. In the meantime, white co-workers—with job skills, experience, and union wages no different than his — had benefited, far longer, from the much greater appreciation in the value of their homes. The multi-generational impact of this economic disparity, multiplied hundreds of thousands times, was not mitigated by passage of national “fair housing” legislation in the late 1960s or court decisions eventually banning restrictive covenants.

“What might have become of these Stevenson grandchildren if their parents had grown up and attended school in an integrated Milpitas? How much further on the socioeconomic ladder would they have been able to climb… How different might their lives have been were it not for the federal government’s unconstitutional determination to segregate their grandparents and their parents as well? What do we, the American community, owe this family, in this and future generations, for their loss of opportunity? How might we fulfill this obligation?”

During a Q&A with Rothstein after his talk, several audience members confessed the accumulated weight of evidence in Color of Law makes for painful reading. His older questioners included speakers who personally experienced block-busting tactics by realtors and resulting white flight, the contraction of the Black business community in inner cities, and the demographic shift in U.S. public housing from “working class families that were not poor” to its present-day population of much lower-income, far more disadvantaged, and almost entirely non-white residents.

The bottom line today, as Rothstein noted, is an enormous disparity in wealth and income between Blacks and whites. It’s largely attributable to the factor of home-ownership (and where, when or whether it existed at all).

One audience member, an African-American women, suggested — like the writer Ta-Nehisi Coates— that financial “reparations” were the only just solution. Later, a white speaker dismissed this idea as too divisive and impractical.

In his book and Richmond appearance, Rothstein emphasized the need for “make-whole remedies” that “also include policies that do not involve payments.” What’s most important at the moment, he argues, is arousing in Americans “an understanding of how we created a system of unconstitutional, state-sponsored segregation.” Without a “sense of outrage about that, neither remedies nor reparations will be on the public agenda,” he predicts.

Rothstein and his colleagues at EPI had high hopes for what a Hillary Clinton administration might have accomplished in the area of housing. Those aspirations crashed and burned on Nov. 8, 2016. And, now one year into the Trump era, even existing federal tax incentives and subsidies for low- and moderate-income housing, built by private developers, have been sharply curtailed. The result, proclaims a recent New York Times headline, is that “affordable rents may take a hit.”

According to the Times article, the new Republican-crafted tax code changes “will reduce the growth of subsidized affordable housing by 235,000 units over the next decade, compounding an existing shortage.” Amid this looming “undersupply” of affordable housing, developers are instead pursuing tenants who can afford “the pricey glass and steel buildings that have sprouted in downtowns across the country.”

In Richmond, Rothstein reminded his audience that “there won’t be any improvement in government action [on housing] until you create the necessary political base,” something that would have been true even under Clinton, he acknowledged.

“Residential segregation is the underlying cause of most of the country’s social and economic problems,” he said. But, without developing “a wider understanding of history” and “a new consensus on remedial policies,” the latter will remain “politically unfeasible,” regardless of who controls the White House and Congress.

(Steve Early is a Richmond resident and the author, most recently, of Refinery Town: Big Oil, Big Money, and the Remaking of an American City, now available in paperback from Beacon Press.)