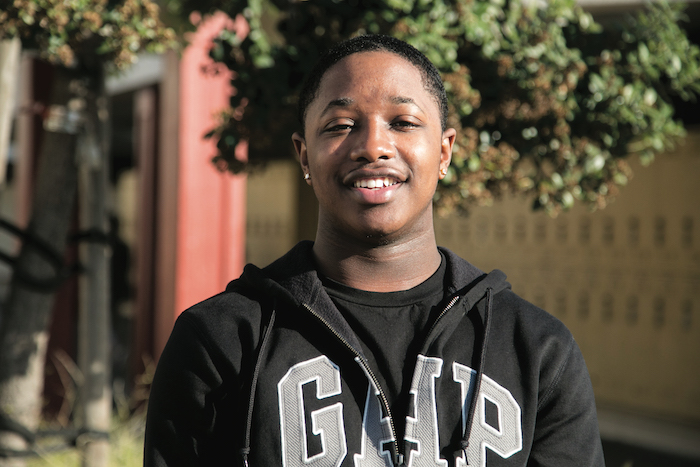 Posted at 18:07h in Education, Youth by RPadmin 0 Comments

As co-president of the club that began earlier this year, Dennis believes the BSU offers a space for African Americans to talk about race-related issues with their peers — especially as racial issues are constantly in the news and throughout teens’ social media feeds.

Kennedy High is following a growing number of schools in the Richmond area that have launched similar clubs in recent years. Politics, the take-a-knee protest and the Black Lives Matter movement have sparked students into action.

Richmond Pulse recently spoke with Dennis, a Kennedy High senior, about the school’s new club and the impact he hopes to make on African American students.

Richmond Pulse: Why do you believe it’s necessary to have the Black Student Union at Kennedy High?

Jarschire Dennis: We need to bring unity among the African American students. We do allow other students to join the club, but it’s primarily meant to uplift our African American students. This is their home outside of home and they can come to this group and feel safe. So many students are just ready to just lay down and take what society has to give them. But we want to show them that they can have so much more.

RP: What are some of your goals for the BSU this school year?

JD: I want the African American students on campus to know that it isn’t just about running around with your friends and skipping class. You can be so much more in life if you just apply yourself these little four years. I tell students all the time: ‘Just go to class and do your work, and pay attention as there will be so much time for other stuff.’

Our main goal is to advocate for all the students on campus and educate them on who they are as Black people in America and to enjoy their lives while being responsible at the same time. We’re also hoping to create a sense of unity among the African American students at Kennedy. I tell the students that if they ever need me, to reach out, I’m here for all of them. I really just want them to feel like this is their home outside of home.

RP: Why are you so passionate about the BSU?

JD: It’s so easy for African American students to get lost in the complacency of the modern day society. And me, being an African American student that is actually ‘woke’ to the fact, I feel like it is my job to educate them on this and what they do after that is on them. I just really want everyone to achieve the best that they can in life and be the greatest they can be. I feel like me and my co-president (Samone Anderson) have touched a few students but not as much as we would like. But change always starts in small waves.

RP: What are some of the activities that the club has sponsored?

JD: We’ve sponsored a meet-and-greet and once a month. We do First Fridays and sell snacks on campus to fundraise for the club. Our meetings are every Monday, and we’ve been reading and breaking down the book The Willie Lynch Letter: the Making of A Slave. We also had a financial workshop where students could learn how to save money and plan for their future. We’re having some shirts printed on campus by the silk screening class at Kennedy.

For February, we’re planning on blowing up the whole month with a festival and events during lunch for Black History Month.

Our club is pretty small — it’s the smallest club on campus since we just started this year. We were trying to start a study group but not too many students wanted to participate, so we had to cancel it. But we’re not giving up. We just want to support our students on campus.

Kennedy used to have a very strong BSU and that’s something we hope to accomplish. We want to pass the torch and come back and see that the club is thriving. I’ve been talking to all the BSUs at schools in the Richmond area, and I want us to sponsor an event where all the BSU members can come together and meet everyone. And I hope that we can have a Black student graduation for all the students in the area. We’re new, so I would learn and get ideas from the other BSU presidents.

RP: How can Kennedy alums and other adults get involved to ensure the BSU is successful?

JD: We have a lot of events that we want to sponsor, and we would love to have Kennedy alums participate. Events are really what touch the students, where they can really come and have fun. We want to have a big barbeque cookout, a fun-in-the-sun day in February to honor all the African American students on campus and take pictures in the quad area. We are looking for people to come speak to the BSU students. We are looking for people who want to come share their story. Those stories can often touch people because students will hear from adults who went through the exact same things they are now facing and what they did to overcome it.

RP: How do you think this group will increase camaraderie among African American students?

JD: We are here to support each other, show love and be positive because that’s what people need. You never know what people are going through at home, and we just want to be there to show each other love to make sure people get through the day. I like to check in with students all the time to see if they really need anything. Not a lot of students like to talk about what’s going on at home.