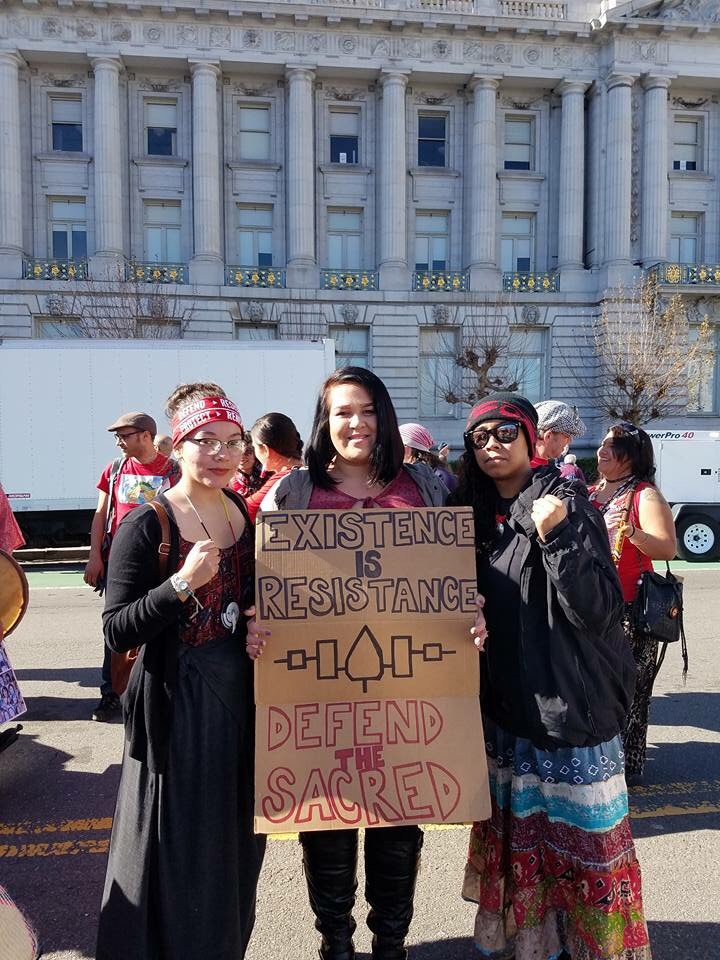 05 Feb Save Our Sisters: Indigenous Voices at the Women’s March

Posted at 18:45h in Arts and Culture, Women, Youth by RPadmin 0 Comments 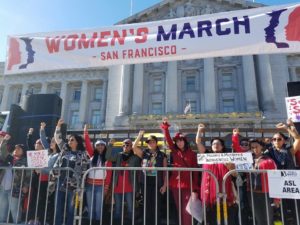 It was the day after a California rainstorm. While the sun was drying up the wet pavement, thousands of women with pink cat beanies and sparkly signs flooded the streets. For the second year in a row, women from all walks of life gathered in the streets  of the Bay Area and across the country for the Women’s March.

This year’s march in San Francisco started with an opening blessing by Kanyon Sayers-Roods, a California tribal member of Indian Canyon — the only federally recognized tribe between San Francisco and Santa Barbara.

“I want to thank you for acknowledging indigenous protocol, which means that we acknowledge the First Peoples’ territory that we occupy in today’s postcolonial settlers’ society,” she said.

At the end of her speech, Sayers-Roods offered a traditional song dedicated to women, grandmothers and all the caretakers of the earth, in love and humility for all people.

As I squeezed my way between fluffy ballerina tutus and superwomen capes, I gazed upon a corner of women wearing red skirts, shirts, lipstick, and hand drums. I had found my group. A few weeks prior to the Women’s March, there was a Facebook invitation for indigenous women and allies to wear red. Red is a significant color resembling power and protection. It’s also for women and young girls who have gone missing and or have been murdered.

As an indigenous woman, I felt a calling to show up and stand with all of my sisters and knowing that I too am representing those who have gone on to the next world, and for the family members who are still searching for their loved ones.

A group of about 40 indigenous women — different shades, different clans, different regions throughout the Americas — stood in resilience as we looked at the crowd of awed faces with the San Francisco City Hall at our backs.

Pennie Opal Plant is Yaqui, Choctaw, and Cherokee and founder of Movement Rights, co-founder of Idle No More SF Bay, and signatory of the Indigenous Women of the Americas Defending Mother Earth Treaty. She spoke and voiced concerns about the destruction of Mother Earth and missing and murdered indigenous women.

“Is that okay?” she asked the crowd.

There has been a strong movement going on through the social-media hashtag #MMIW, to highlight the issue of missing and murdered indigenous women. People post photos of red dresses in front of door steps, near bridges or at a local playground representing those who are missing.

With our fists held high, the crowd continued to roar even louder. For the first time in a long time, I felt noticed and native voices were heard and respected.  It is a continuous struggle as a young indigenous woman to feel acknowledged in today’s society due to the many stereotypes through mascots, sports, Hollywood and television. But these stereotypes do not determine who I am and what my people have been through. Our existence is a resemblance of our ancestors’ resilience.

We led the march with our 15-foot yellow banner reading “women for climate justice.” Our sage was lit, the children were close, and we started to sing with the rhythm played on multiple hand drums. In the distance and on the sidewalks, you could hear guitars and drums as people chanted loving words.

Signs read “I’m with her” with arrows pointing multiple directions. “No more missing and murdered indigenous women.” “I STILL have a dream…social equality in my lifetime.” “Pussies don’t make a woman. Trans women are women.” “Save our sisters.” “Hear us roar.” “Sorry my civil rights are in the way of your misogyny.”

I didn’t notice until we reached our final destination at the Justin Herman Plaza that there were still hundreds of thousands of women, children, men, and trans-allies continuing to flood the busiest street in San Francisco for another two miles.

Participating in the San Francisco women’s march made me realize that humanity still has a long way to go when it comes to equality. This was a moment I will never forget and I think we should all support movements like this to better understand how to create change for the better.