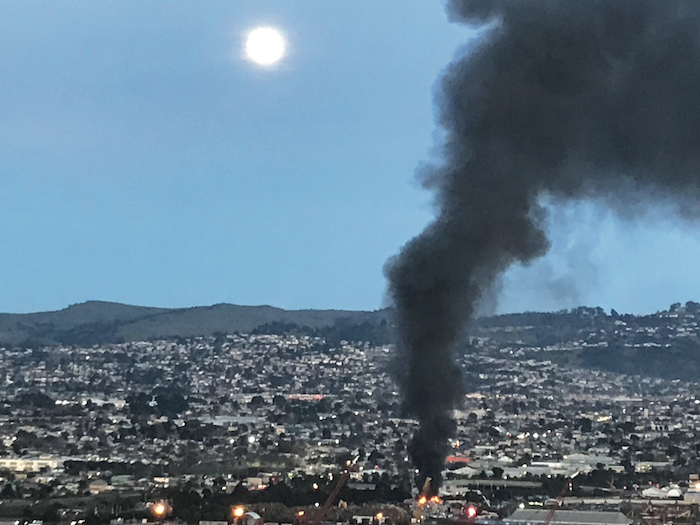 Posted at 04:00h in Business, Environment, Health by RPadmin 0 Comments

Almost every seat in the Nevin Community Center auditorium was filled with concerned residents and city officials as people recounted their reactions to the black cloud of smoke from the fire last month at Sims Metal Management scrap yard in Richmond.

The day before the meeting, the Bay Area Air Quality Management District (BAAQMD) issued two notices of violations to Sims, one for public nuisance and the other for illegal open burning. A pile of scrap metal, including refrigerators and washing machines, went up in flames at Sims metal management site at 600 S. 4th St. on January 30 and burned for about 10 and a half hours. The blaze prompted a shelter in place order for the Iron Triangle, Atchison Village and Santa Fe neighborhoods.

“There is an investigation under way that could lead to fines and penalties,” said Contra Costa County Supervisor John Gioia in a phone interview. Gioia is also a member of the Bay Area Air Quality Management District board.

Gioia said BAAQMD air samples showed high levels of toxic particulate matter released in the fire that were close to some of the levels of last year’s North Bay fire.

“This was a major incident that had serious health consequences. Looking at the cause is always important,” he said. Air samples found high levels of benzene, a chemical known to cause cancer.

At the meeting, Beverly Broadway, who lives in the Iron Triangle, recalled thinking that there was something different about the cloud of smoke that formed over the scrap yard, but she initially shrugged it off.

“It looked menacing to me,” Broadway said of the black smoke. “I thought it was just a normal fire because we hadn’t gotten any warning.”

Some residents of the Iron Triangle and surrounding neighborhoods said the smoke reminded them of the 2012 fire at the Chevron refinery that sent thousands of residents to local hospitals seeking treatment for respiratory problems.

“I saw the smoke, and the first thing I thought was it was Chevron again,” Andres Soto, organizer for Communities for a Better Environment, said during the Q&A between residents and Sims’ staff.

Soto went on to question whether the city should revisit its land use agreement with Sims “because of the inherent dangers of [their] operation.”

Mike Holmes manages the scrapyard at Sims and said that precautions such as “a system that monitors the [scrap metal] pile and looks for temperature changes” weren’t enough. And when questioned about fire training for on-site staff, Holmes said that they are “not trained firemen” and only have enough training to put out small fires.

Scott Miller, Sims’ chief corporate counsel, did not specify the terms of the agreement. He did, however, reject the idea that their scrap metal site is a ticking time bomb for scarp metal fires as Soto alleged with his “inherent danger” question.

Gioia said he is glad people in Richmond are looking at land use issues associated with this facility, “and whether this is the appropriate use for that site.”

“Until we understand the cause we won’t know what future action to take,” he said.

Amidst the scrutiny of the metal management company, one community member’s comment stood out because it was critical not of Sims, but of the negative feedback from folks at the town hall.

“The businesses don’t wanna come to Richmond,” Antwon Cloird said. “But the ones that’s here that’s beneficial to use, we wanna run them out.”

Several residents asked Sims’ management and Richmond Fire Chief Adrian Sheppard about next steps, and sought a concrete answer on fire prevention efforts from both agencies. While no specific plans were provided to the audience, both Sims and Sheppard said they are awaiting the results of their independent investigations and will develop plans from there.