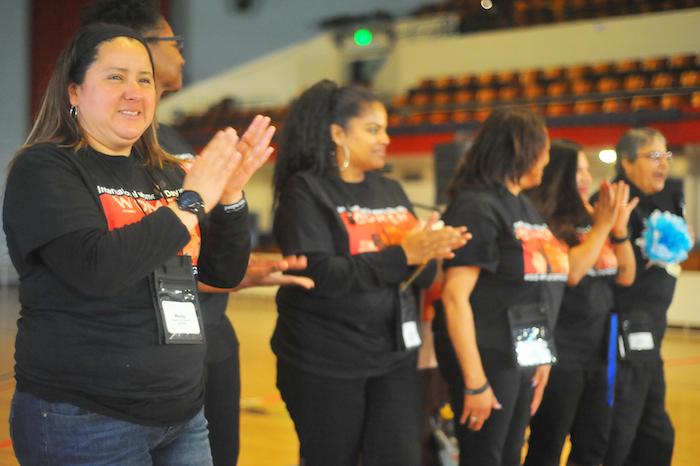 Posted at 20:13h in Arts and Culture, History, Women by RPadmin 1 Comment

Lifelong Richmond resident Judy Washington decided to attend the city’s celebration of female leaders on Saturday for one reason: to join the women of her hometown and learn about their work. She didn’t know she’d be spending time among warriors.

Long oppressed by an exceptionalistic male society, educated women now stand at the forefront of social change, working to empower females in the United States and around the world.

For more than a decade, the city of Richmond has celebrated those women by sponsoring the Sisters in Solidarity event in honor of International Women’s Day. The event aims to educate, inform and rally local women to change their communities by taking on leadership roles. 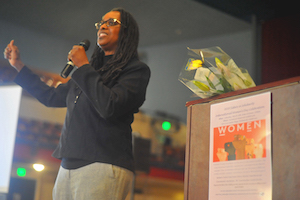 Emceed by Richmond City Councilmember Jovanka Beckles, the 11th annual Sisters in Solidarity was billed as a “celebration of solidarity and the efforts of women in politics.” The networking event, which connects women from different backgrounds with organizations throughout Richmond, was held in the Civic Center Auditorium.

Around 150 women attended the event, which featured a spoken word presentation, seminars, workshops, a comedy routine, song performances, lunch, raffle prizes and more. The auditorium’s entrance was decorated with tables filled with pamphlets and candy, where women talked about their work with a smile. Women from different organizations sat and watched attentively as different women performed. As the spoken word performer punctuated her piece with a raised fist, the audience erupted in cheers for the embodiment of the power of women.

Max Dashu, a women’s history researcher and Richmond resident, used history to show the power women hold as a social group by presenting a slideshow of egalitarian societies where it was common for women to be in positions of authority.

For example, the highlander people in Vietnam sustained matrilocal culture — where husbands would live with their wife’s family — that respected both women and men. The Delaware tribe sent a female chieftess to meet then-Lt. George Washington to negotiate for them. Dashu said societies such as the ones she described each had a system of respect between the genders, something she thinks the U.S. lacks.

Dashu said certain social constructs, such as western exceptionalism — the idea that a certain group of people (men, in this case) are inherently better and different than the rest of the world — silence women and has historically shut them out of leadership roles including chief, prophet, priest, general and politician.

Dashu said that when colonization began, male English settlers would not bring the women to diplomatic negotiations with some Native American tribes. The Native American men would ask the Englishmen why there were no women in their group. Dashu said the native men were concerned by the settlers’ actions because they believed there must be women and men in matters of war and peace. She said an all-male group signified a declaration of war to them.

“We have to be persistent and constantly reclaiming our title. We have to refuse to behave [as oppressed women],” Becton said. “We can’t simply allow ourselves to be silenced into what is expected.”

She said the sexually oppressive current system of power is being dismantled through movements such as #MeToo and Time’s Up. Becton said she has struggled as a woman in her field. After climbing up the ranks, she now wields enough social power to influence her community by prosecuting people under the law.

Becton served 22 years as a judge until she was sworn in as the 25th District Attorney for Contra Costa County in September, becoming the county’s first female African American top prosecutor.

“No matter how far we have come, make no mistake, we still have a lot of work to do,” she said. “That is why, today, we are still pressing for progress. Women have still been silenced and continue to be silenced.”

Another featured speaker, Richmond City Councilmember Ada Recinos, said there has been a war on feminist views to the point where boys are raised to be hyper-masculine and not embrace their effeminacy. This mentality isolates men from the reality that the female is as strong as the male, she said. A discussion about female leadership in American politics, she said, must acknowledge the many generations of women that got them to this point in history.

More and more women who care about their communities are choosing to become politicians, Recinos said. “You might not be into politics, but politics is definitely into you.” she said. At the end of the day, the laws are why we do what we do, and there needs to be representation of women by women in politics, she said.

“A force of women politicians is building,” Recinos said. “In the U.S, over 500 women are looking to run for office this year in all levels of government: local, commission, representatives, senators, and in states that are not progressive.” 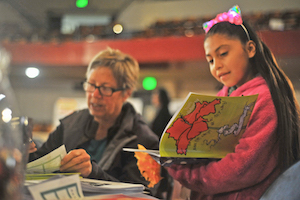 More than 20 community organizations and local businesses, like The Latina Center, Girls Inc., and Weigh of Life, had tables where residents could meet with representatives from local service organizations in the city.

Washington said she was amazed at how many opportunities there are for people to get involved.

“They have been doing this for a while and I want to see what women have going on,” Washington said. “Women are special. Each [woman] has a different individuality, and the event let me see different women’s point of view and will allow me to look at women different from me with more empathy in my everyday life.”

The day ended with a “unity clap” led by Beckles. Everyone in attendance stood up and clapped in unison – building gradually louder and faster, ending in full applause. It was an idea that originated with the United Farm Workers as a way to bridge the communication gap between Latino and Filipino farm workers who didn’t speak the same language.

“The idea was to create unity,” Beckles said. “It’s a way to show solidarity among different people.” 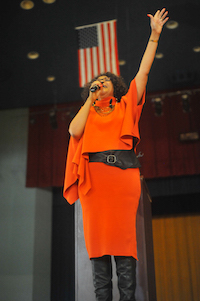