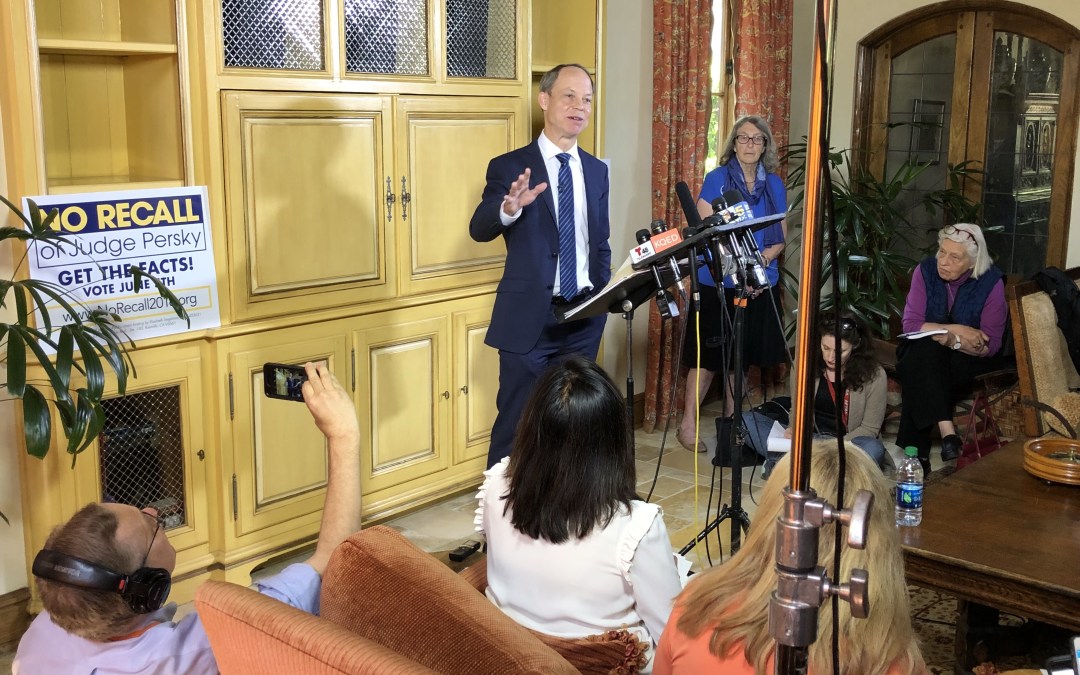 Posted at 21:46h in Bay Area, California by RPadmin 0 Comments 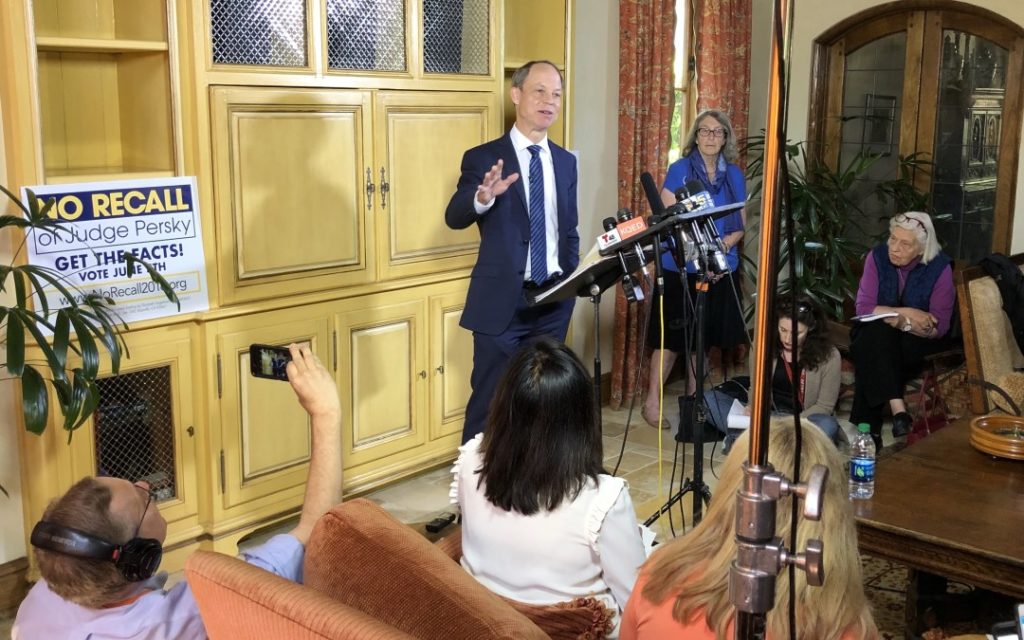 Court of public opinion a danger to judicial system, he says

Breaking his silence on the million-dollar effort to oust him, Santa Clara County Superior Court Judge Aaron Persky warned that the recall on the June 5 ballot in Santa Clara County would, if successful, have the exact opposite effect of what its supporters are claiming.

Persky has been targeted for recall since late 2016 over his sentencing of Brock Turner, the Stanford swimmer who in January 2015 sexually assaulted an unconscious woman but, in keeping with established guidelines for first-time offenders, was spared prison time and served 90 days in the county jail. For the rest of his life, Turner will have to register as a sex offender.

In a press briefing at a private home in Palo Alto on May 9, Persky broke his silence and confronted his critics. Also on hand to face the large turnout of journalists with their questions, cameras and microphones, were retired judge LaDoris Cordell, Santa Clara University Law Professor Ellen Kreitzberg and others who support the judge.

Persky began by explaining his duty to judge each case on its facts and on the rule of law, independent of public opinion.

Because Turner is appealing his conviction on three felony charges, Persky said he couldn’t discuss the case beyond referring to how he described his deliberations in 2016: https://tinyurl.com/PerskyonTurner.

He had cited the absence of premeditation or use of weapons, the lack of prior convictions and his belief that Turner was unlikely to reoffend, factors all judges must consider.

“We promise as judges to rule on the facts and the law, and not public opinion,” Persky said.

But, his supporters argue, his detractors have played fast and loose with the facts in a handful of the thousands of cases he’s presided over since being appointed to the bench in 2003, falsely describing defendants in other cases as “white, privileged, male athlete,” drawing comparisons in dissimilar cases and linking him to developments in which he played no role.

The threat of recall, he said, “is a subtle and insidious, silent corrupting force … that will enter the minds of judges as they contemplate difficult decisions.”

He cited two well-known historical cases as examples of the need for justice to remain blind to public sentiment. The first, 1954’s Brown v Board of Education Supreme Court case that ended school segregation, was adjudicated at a time when much of society supported segregation ꟷ often at the point of a gun.

In a more recent case closer to home, he noted, the courts in 2008 found that California’s “defense of marriage” Proposition 22, enacted by voters in 2000 to prohibit same-sex marriage, was unconstitutional.

“Imagine if those federal judges had been subject to recall,” he said. “We ask judges to follow the rule of law, not public opinion.”

He also pointed out that jurors are routinely instructed to avoid media coverage or public discussion of any case they’re involved in, to keep their decisions independent.

Asked why as criticism mounted he had remained silent, Perksy said he believed judges should accept criticism of their decisions and not respond to a difference of opinion. But the recall effort takes it a step too far, he said. If successful, “it threatens the integrity of our criminal justice system.”

“I really think judges should typically zip it,” he said. “It’s only when you get to the point that it (a recall) may be successful, it gets serious and demands a response. The stakes are too high.”

Persky’s sentencing of Turner adhered to the recommendations of Santa Clara Chief Probation Officer Laura Garnette, whose report on the case, https://tinyurl.com/Turnerprobationreport, included statements from the victim urging counseling over incarceration for Turner and concluded: “In the case, a moderate county jail sentence, formal probation, and sexual offender treatment is respectfully recommended.”

But the criticism has gone so far that Persky’s name has become a part of speech in judicial circles, said Cordell, who ardently opposes the recall, citing a Los Angeles judge’s statement about a difficult case: “I don’t want to become the DUI Persky.”

“There is no judge who would’ve sentenced Turner to prison,” Cordell said. Another recall opponent, Kreitzberg, said that District Attorney Jeff Rosen, who prosecuted the case, agrees.

Rosen’s office confirmed that the D.A. opposes the recall effort.

A moving statement to the court by Turner’s victim led to the case becoming a cause celebre nationwide, with Vice President Joe Biden among those weighing in to support the unnamed woman Turner had assaulted after leaving a frat party on the Stanford campus and finding her unconscious and lying near a Dumpster.

Acting with unusual velocity, California in late 2016 toughened its laws on sex assault to include minimum prison sentences and broaden the legal definition of rape, despite widespread concern that this would disproportionately affect low-income and minority defendants and could make victims reluctant to accuse assailants they know ꟷ the most common category of sex abuser.

Stanford law Professor Michele Dauber, a friend of the victim’s family, initiated the recall campaign against Persky in 2016. So far, the campaign has raised more than $1 million in donations, including $221,000 from Los Altos psychiatrist Karla Jurvetson, who did not return a call seeking comment. Persky’s supporters have raised less than $100,000 to counter that effort.

Cordell points out that Dauber lacks real-life experience in the criminal justice system. Dauber, Cordell said, “has never passed the bar, has no background in criminal law or procedure and either doesn’t know or is misinterpreting it.”

The money and effort spent in “scapegoating” Persky in the recall drive, she said, would have been better spent supporting victims with counseling, shelters and services, processing the backlog of rape kits police have collected, or advocating for a justice system that is more equitable in prosecuting and sentencing of people of color.

In arguing for the recall at a January press conference, Dauber claimed that a study by the UC Berkeley law school’s California Constitution Center concluded that the recall would not impact judicial independence.

“This is just one of the many untrue and misleading statements that she’s made over the course of the campaign, and I feel a responsibility to let the public know about this.

“That center is at my law school and it came to no such conclusion,” Chemerinsky wrote in an opinion piece for the Sacramento Bee. “The center did a report on the history of recalls, but the report said no such thing about the effect of recalls on judicial independence.”

Asked what impact the recall has had on his personal life, Persky said, “Negative attention has permeated my life for the past two years.” He said his wife had received flyers in the mail accusing him of failing to protect the community, and his young children have seen their father’s image on posters alongside mugshots of criminals.

“One of our jobs is to promote public confidence in the judiciary,” Persky said. “Will judges have the guts to make hard decisions? Will the public believe that a judge will risk losing his job over a difficult decision?”

He said the recall process is “a little bit of a safety valve” when a judge has proven incompetent or guilty of misconduct, and even said that the furor over the Turner case has had “one positive aspect.” “It’s become part of a larger conversation,” he said. “Let’s use that passion.”

Dauber and the recall supporters cite five cases Persky has presided over as proof of their claims that he favors privileged white men, particularly athletes, accused of sex crimes or violence against women: https://tinyurl.com/Recallcases.

But those claims are false in every instance, Persky’s supporters state, and direct voters to review the documents available at norecall2018.org/get-the-facts for details on the cases.

Three separate reviews by the California Commission on Judicial Performance, the Associated Press and the Santa Clara County Bar Commission found the judge consistently hewed to established guidelines in his sentencing, including in the Turner case.