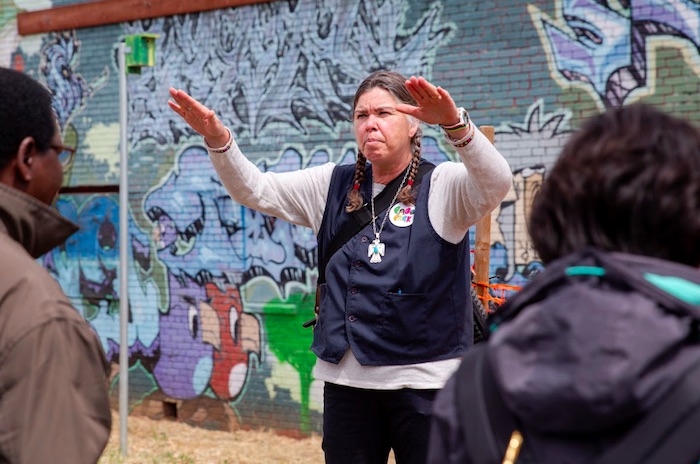 26 May Pogo Park Is An International Example of Community

Posted at 19:18h in Arts and Culture, Neighborhoods by RPadmin 0 Comments

Above: Toody Maher, founder and executive director of Pogo Park, holds a discussion with participants of the 2018 International Climate Change Seminar during a field visit for the seminar at the Richmond Greenway in Richmond, Calif. on May 23.

What looked like a normal gathering at Pogo Park on the morning of Wed., May 23 was actually an international meeting of the minds between 25 climate change specialists from 21 different countries.

As part of the 2018 International Climate Change Seminar, hosted by the U.S. Forest Service International Programs and the University of California, Davis, participants toured Pogo Park and the Richmond Greenway, learning what residents have done to create a cooperative green space and how it is impacting social and environmental welfare.

Through planting trees and green spaces, implementing a large-scale walking/biking path known as the ‘yellow brick road’ and using the park to educate the community about climate change, Pogo Park team members are embracing the issue of climate change on several fronts.

Before Pogo Park was able to exist though there was the challenge of bringing together a community that didn’t know or trust each other. James Anderson, a member of the Pogo Park building design team and maintenance crew, was born and raised in the Iron Triangle, where the park is located. He moved across the street of the park in 2011, the same year they began their project — the transformation of what was then known as the Elm Playlot. At that time, Anderson said there was little to no relationship between neighbors and people would peer out of windows but stay inside due to the dangers in the area.

It’s this unity that is helping Richmond neighborhoods handle climate change on a different level. According to researchers, resilience is becoming one of the largest ways of adapting to climate change. A strong community that trusts its neighbors is a community that can adapt to adversity. 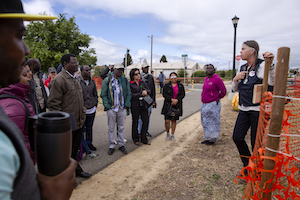 The Pogo Park team works to create a space where community members can come together, feel safe in their surroundings and learn from each other. The staff uses the community space to encourage healthier lifestyles for their neighbors. They offer exercise classes, free meals for children, resource assistance and a gathering space for families. In creating a safe, social space, members of the community are able to converge and learn from each other as well as the Pogo Park staff, encouraging a healthier learning environment for tackling important topics on climate change and healthy living.

“When you are alone by yourself, there’s nothing you can learn and there’s nothing that you can share,” said Evelyn Asante-Yeboa, a seminar attendee and a natural resource professional in the field of Forestry and Geographic Information Systems in Ghana, “but when you are together you learn from each other.”

“Even as we are gathered here we are learning from each other,” she added.

Many participants in the seminar echoed similar sentiments, applauding the people behind Pogo Park for their ability to create a beautiful space with such limited funding and in turn bring a community back together.

A seminar participant from Jordan likened the park staffs’ community efforts to an Arabic poem written by the prominent poet Motonabi. Translated to English it states:

‘You can move your heart around but the real love is the first love. You can move around from place to place but your real home is your childhood home.’

“You’re creating a home for these children.” Moh’d N. Kraishy said in reference to the poem.

But it wasn’t all praise; a common concern brought up by seminar participants – as well as park staff members – is whether the park can continue to be monetarily sustainable.

Currently, the park is working with a diversified stream of income broken down between grant funding, donations and earned income through product sales of environment designs and individual park amenities. The hope is that by spreading income sources out, Pogo Park will be able to maintain sustainability and can weather any changes if an individual source of money dries up.

As a way of monetizing the park, the Pogo Park Building Design team has begun contracting with other spaces, creating everything from entire park layouts to individual park amenities such as slides, sand boxes and benches. In order to keep the earned income and jobs within the Richmond community, Pogo Park has partnered with Scientific Art Studio, a company based out of the Iron Triangle six blocks from the park. In creating this partnership Pogo Park has been able to cumulatively invest 1.62 million dollars in jobs and job training for Richmond residence since 2014.

In what was once considered one of the most dangerous neighborhoods in the United States, a revitalized community is flourishing. Pogo Park’s founder Toody Maher considers it “a postage stamp of Eden” and the international visitors echoed her feelings.

“Pogo Park is one of the most beautiful things we’ve seen here,” said Abibou Sane, from Senegal. “Thank you for showing us another America.”