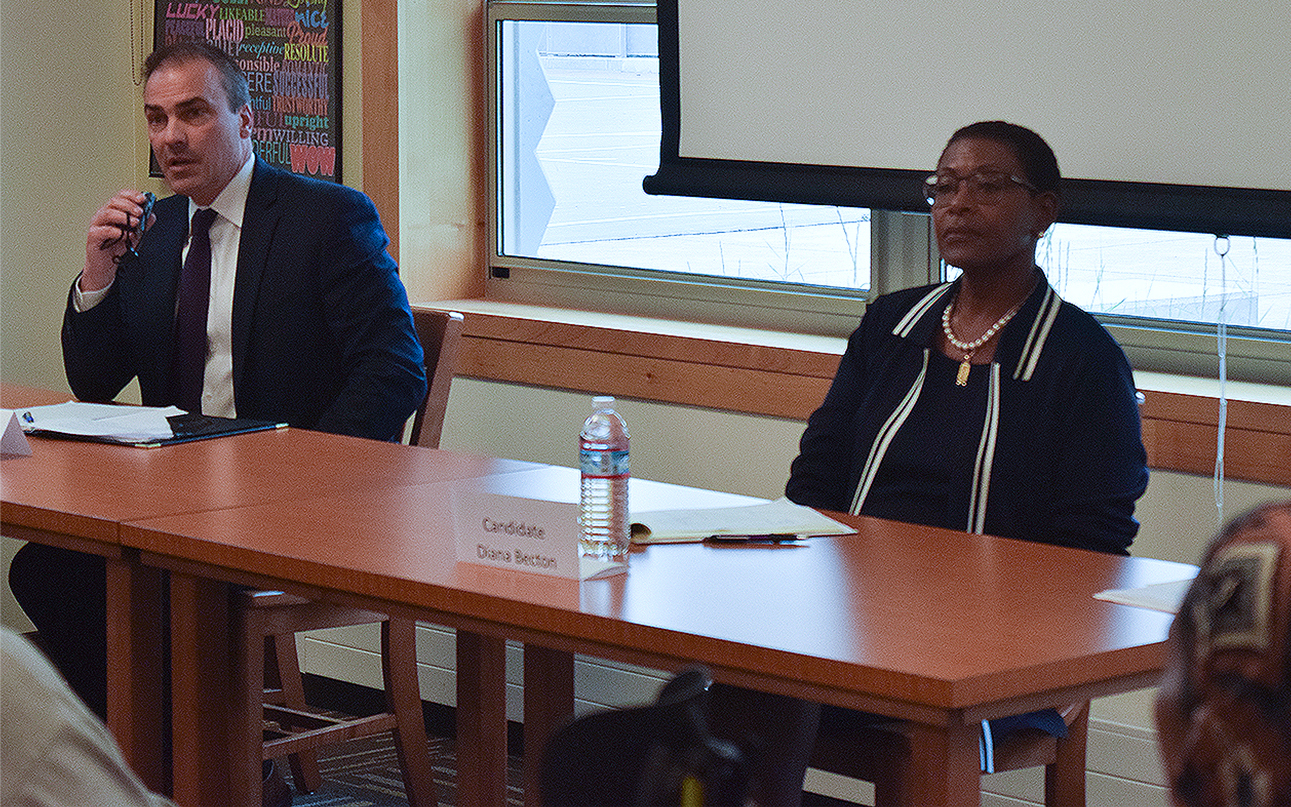 Volunteers transformed the small, colorful library at Richmond’s Sylvester Greenwood Academy into a space fit for a press junket. A crowd of about 50 people gathered for the “Youth and Young Adult District Attorney Town Hall” on Thursday, May 23, to hear from two of the three candidates vying for the Contra Costa County district attorney seat.

Interim D.A. Diana Becton and Deputy D.A. Paul Graves attended the town hall to speak with constituents ahead of the primary election this week. Becton and Graves both applied to the Interim D.A. position in 2017, after former D.A Mark Peterson resigned from the position following felony perjury charges.

Becton was a county judge for 22 years before becoming the interim D.A., and is endorsed by Senator Kamala Harris, and regional social justice groups, including Black Women Organized for Political Action (BWOPA). She has said she supports alternatives to criminalization like diversion programs, especially for youth offenders.

Supporters of Graves, a prosecutor, also with 22 years of experience in Contra Costa County, include County Sheriff David Livingston and Richmond’s police officer’s union. Graves heads the county family violence unit, where he prosecutes defendants of crimes involving domestic and sexual abuse. During the town hall, Graves emphasized his vision of a “victim-centered” district attorney’s office, where cases move through the system more swiftly.

The town hall was called to order with a reading by local poet DeAndre Evans, who spoke to the adversity faced by young people of color. He described how living in low-income communities affects every part of their lives, from living in homes without heat to being treated unfairly by law enforcement.

“This is where we’re protected by those who protect and serve,” Evans recited. “Yeah, they serve us with Tasers, clubs and bullets.”

This poem primed the audience for a conversation about how issues like cash bail and charging young offenders as adults disparately impacts youth of color. Presenters during the town hall say forums like this are a necessary part of reminding the community about the power of informed voting. That includes understanding the role of a district attorney, which community organizers say doesn’t happen early enough.

“The only time you’ll encounter district attorneys is when you’re in the courtroom, and you’re actually facing charges,” said Yoel Haile with the Northern California American Civil Liberties Union (ACLU), who showed videos that explained a district attorney’s role and explained how teens are charged as adults.

When asked about their stances on charging youth as adults, both candidates were unwilling to make “blanket” policies to never recommend a young person’s case be sent adult court. They sited the heinous and serious nature of some crimes and emphasized their primary responsibility to public safety.

“There’s so many variables,” Graves said. “So many different types of cases, so many serious and violent felonies, and so many victims.”

Both did, however, resolve to be transparent about the reasoning behind their decision to pursue adult charges. Becton also vowed to be transparent with her findings in cases of fatal officer involved shootings of unarmed people.

“It will be put on the website so the community can see the reason for my decision,” she said. “And you’ll be able to help hold me accountable for the decisions that I make.”

While several people in the crowd were too young to vote, they were nonetheless invested in the candidates’ stances. During questions and answer portion, young people emphasized criminal justice official’s latitude in influencing the course of a young person’s life. One high school student voiced concerns about the addition of gang enhancements to someone’s sentence. Another asked for the candidate’s thoughts on in-school arrests for offenses like “property damage and marijuana possession.”

“I understand it might disrupt the school, but arresting someone for marijuana on campus is not the solution,” Graves said before pointing to the impact that literacy has on youth’s participation in these kinds of infractions.

“So instead of calling the police, schools should have them sit down and read a book,” he continued.

Becton responded to the same question, adding that these types of “low-level crimes” are often a student’s entry into the criminal justice system. But, she said, these situations are also an opportunity to balance holding students accountable and dealing with them holistically.

“These are the kinds of cases that would be perfect for restorative justice and community courts,” Becton says. “So we’re looking at the best diversion programs that we can bring to our county.”

For event organizers, creating a space where young people – who can’t yet vote—can ask hard questions and voice their concerns to candidates was especially important.

“Young folks are always left out of these conversations,” said the town hall organizer Le’Damien Flowers. “And most folks who get impacted by the criminal justice system, it’s at a young age.”

“So we really want to have folks in this position that are gonna create systems to support emotional and social healing for young folks,” Flowers continued.

Voters statewide will cast their votes on Tuesday, June 5. Click here to learn about the measures, and candidates on the year’s ballot.