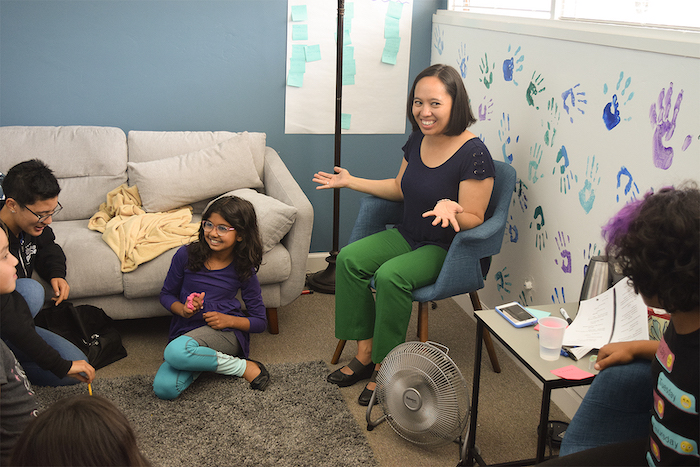 21 Jun The Practice Space Trains Youth to Use Their Voices

Posted at 18:37h in Education, Youth by RPadmin 0 Comments

Eight students arranged their chairs on either side of a beige wall in preparation for a heated debate: “Dragons vs. Unicorns.” The young debaters, ages seven to 11, stood up to present their points for or against either mythical creature.

“They blow fire and have green eyes,” a young, pro-dragon, girl argued to the opposing team. “I highly recommend dragons versus unicorn.”

“Unicorns are kind, and dragons can be violent sometimes,” her opponent rebutted. “For all these reasons, unicorns are better than dragons.”

This spontaneous argumentation — or S.P.A.R. match — was just an exercise and neither side was declared the winner. But speech and debate instructor AnnMarie Baines says her all-female class still learned about presentation, and preparing talking points.

“They’re able to inspire other people to act,” Baines said. “The definition of effective communication is being yourself and talking about the things that you care about.”

These student workshops are only about half of what Baines’ organization, The Practice Space, has been doing since it opened in May 2017. It’s a place where debate students can work on their arguments and monologues for competition, and adults can take private classes on professional presentations. Now, Baines is expanding the organization’s reach to address inequalities in schools and communities by helping folks in underserved areas become self-advocates through public speaking workshops.

“Everyone starts with a voice but only some people get to develop it,” Baines said. “It costs a lot of resources in order to get that.”

At The Practice Space, private classes for adults are $50 an hour and two-week long speech, debate and public speaking camps cost $500. But, Baines says, grant funding is helping about one-third of the students attend these classes for free. She also facilitates free workshops for students and their parents.

“We are trying to give voices to people who may not always practice using them,” Cristina Kountz, a program coordinator, said.

Kountz got into speech and debate during the summer of her freshman year at El Cerrito High School in 2010. Baines was one of her coaches and Kountz says that she is excited give people similar guidance through her work at The Practice Space.

“Whatever your race or your income, we want to be able to give that equitable opportunity to everybody,” Kountz said.

“[Coaching is] something I’ve done consistently even as my various careers have changed,” Baines said. “It’s the one constant that I’ve had in my entire life.”

She is hoping to reach people in West County and help folks of all ages develop skills to verbalize their community’s needs to decision-makers in spaces like school board meetings and town halls.

“A lot parents and families are the only voice for the kids,” Baines said, recalling her time as a special education teacher. “As long as you know a kid’s strengths, limitations, likes and dislikes, you’re all good. But where are you going to get that information?”

That typically comes from parents and family members, but that requires them to be able to voice their concerns, Baines said.

In September 2017 Baines partnered with the West Contra Costa County arm of Go Public Schools, a statewide organization created to address the roots of underperformance in district schools. She led workshops for parents, many of whom were English-learners. During the classes she taught them how to “tell their story” according to Sheila Ramirez, one of the workshop participants.

Ramirez is now an outreach coordinator for Go Public Schools, and says that her new role came with monthly public speaking obligations, for which she felt unprepared.

“Before [the class] I could never stand in front of the public. I was an English language learner all through high school,” Ramirez said. “I still have issues with my accent sometimes, so that made me more nervous.”

Now, Ramirez says she’s getting better at articulating her thoughts, and speaks clearly to the outreach workers she manages. She is also sending her nine-year-old daughter Emely, and 14-year-old son Adrian to The Practice Space for summer camps. Emely recently completed the first camp of the summer, and Ramirez says, she’s already seen the effects.

“They had a performance, and she was so nervous,” Ramirez said of her daughter, who is entering the fourth grade at Dover Elementary School in San Pablo. “But that day I was amazed like ‘whoa.’ It was like nothing, because they practiced so many times.”

The Practice Space team is also working to teach West Contra Costa County students how to advocate for themselves in their classrooms and communities. The group plans to hold a free, six-week “distinguished speakers” workshop for high school students to develop their presentation skills. The goal is to train youth speakers who can “speak about anything, anywhere, in any format.”

“I really hope to nurture their ability to speak and feel confident and really take up space in a room,” said Camila Morales-Jiminez, an assistant instructor at The Practice Space and another of Baines’ former speech debate students.

Morales-Jiminez, who just completed her first year at Scripps College in Southern California, says that encouraging students of color to speak up for themselves can help address inequality in schools.

“In high school, I started to see the institutionalized racism and classism,” Morales-Jiminez said. “I think especially with people of color and low-income students, we feel uncomfortable with taking up space in a room full of people that we think know more about us.”

“I feel like this kind of work in The Practice Space, and beyond is really important to showing people who haven’t had their voices valued that, ‘Hey your ideas matter, your experiences matter and your voice matters,’” she continued.

“With kids, especially, it’s so important to make them confident in their own creativity and ability to manifest what they want to do,” Morales-Jiminez said.

Baines said the goal is to help people like Ramirez, and other West county residents to take the skills they gain at the Practice Space into their communities.

“They’re the ones who need to tear down the barriers and assumptions about their communities,” she said, “and it’s really hard when you don’t think you’re valuable.”

The Practice Space is located at 10261 San Pablo Ave., El Cerrito or you can visit on the web at www.practice-space.org.

July 19: YourSpace club meeting (for adult performers preparing for open mics) Held every third Thursday of the month from 8:00 p.m. to 9:30 p.m.