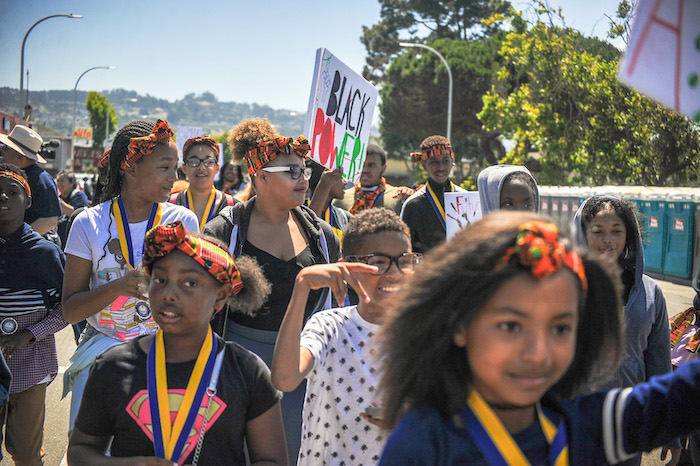 26 Jun Juneteenth Honors the Memories and Struggles of African-Americans

Posted at 20:48h in Arts and Culture, History by RPadmin 0 Comments

AJ Jelani of Richmond set a picture of his grandmother, Susan Martin White, at the front of his booth. She lived in Baton Rouge, La., while slavery was still legal in the United States.

Also at the booth — set up during the city’s annual Juneteenth celebration in Nicholl Park — was a banner with the seal of the African-American, symbolizing the accomplishments of those brought over to America in chains. Jelani said he created the banner in honor of his mother, Ruth Brown, a domestic worker. While vitally important to his life, Jelani says his mother and grandmother will not be remembered by the world because they were viewed as less than human due to their skin color.

Remembering and honoring people like them is what Jelani says Juneteenth is all about.

“In slavery times, they wanted us because of our endurance in plowing and strength, but now that they have freed us, it is time to use our intellectual prowess together,” he said. “What we ought to do now is be productive, creative and supportive towards each other and move forward, never forgetting our past.”

The annual Juneteenth celebration in Richmond, which took place on June 16, began with a parade from John F. Kennedy High School to Nicholl Park. It featured music and dance performances, activities for kids, and a car show. At the park, various community programs and local businesses set up booths.

“We come every year,” Cheri Hill of Berkeley said. “We have made it a family tradition to come celebrate freedom.”

Hill said it was beautiful for the city of Richmond and its people to unite to acknowledge the end of slavery and celebrate the African-American. It also allowed her to meet up with old friends and enjoy some comradery.

“Everybody has to go back to their lives, and so this event emphasizes happiness with each other,” she said.

For Texas-born Elmina Green, who now lives in Richmond, Juneteenth allows everyone to set their minds on one goal: remembering where the African-American people have come from. The presence of local African-American political figures, however, celebrates their accomplishments after slavery was finally abolished. Those victories must be celebrated, as acknowledgement is key to fighting oppression, Green said.

“We are still oppressed today,” she said.

That oppression may not be outright slavery, Green said, but people of color still fight financially and socially against an oppressive government.

As African-Americans have been told to shed their cultural identity, Jelani said there is a need for cultural awareness in Richmond’s Black community. Gatherings like Juneteeth are the perfect place to keep momentum in growing social justice movements.

“You have to get things meant for you, honor you, and give you pride of your culture,” he said. “When you see things that are designed for you, buy them and/or participate in them.”

He said when the African-American community supports itself, they can be more productive, both financially and socially.

“We can do more,” he said. “If all African-Americans would pitch in a dollar or two, they could buy anything they want.”