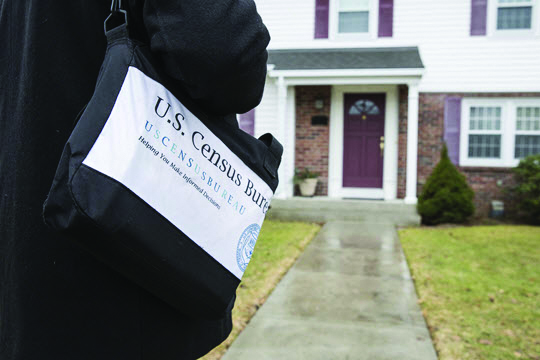 Posted at 23:19h in National by RPadmin 0 Comments

Civil rights leaders joined census policy experts July 17 in an urgent plea, particularly to communities of color, for a show of public activism to derail a fast-moving Trump administration effort to undercount them. The fight begins by taking full advantage of a narrow window of opportunity in which to speak out against it.

That window closes on Aug. 7, the deadline for public comment on the administration’s last-minute plghuiop-=an to, as part of the 2020 census, ask every single person in the United States if they’re legal citizens. The plan is being sold as an effort to ensure voting accuracy, but is widely seen as an effort to discourage participation by communities of color and the poor in the census.

Census data drives the allocation of political representation, business’ investment and funding decisions for transportation and hundreds of other government and private programs.
By adding the citizenship question to the 2020 census, along with cutting its funding and changing how the counting will be done, the government is on course to ensure that millions of people in the United States will not be counted.

“The 2020 census is one of the most urgent civil rights issues facing the country,” said Vanita Gupta, president and CEO of the Leadership Conference Education Fund. “And right now, every person in America has the opportunity to help ensure the count is far and accurate for all communities.”

Gupta, along with other representatives of Asian American, Latino, African American communities and census veteran Terri Ann Lowenthal, emphasized the importance of reaching out to the Census Bureau either through the website censuscounts.org or by writing, and to do so by 11:59 p.m. on Aug. 7 at the very latest.

Some of the organizations represented at the conference call are collecting comments atcensuscounts.org, which they will forward to Washington, but people can also write to the Department of Commerce directly, either via email to PRAcomments@doc.gov or via the regular mail to: Jennifer Jessup, Departmental Paperwork Clearance Officer, Department of Commerce, Room 6616, 14th and Constitution Ave., Washington, D.C., 20230.

“There will be no extensions for submitting public comments,” Lowenthal warned. “Historically, public comments, comments from stakeholders, has been influential,” she said. Lowenthal is policy advisor to the Leadership Conference Education Fund and former staff director for the House Census and Population Subcommittee.

“We need the American people’s help more than ever,” said Arturo Vargas, of the National Association of Latino Elected and Appointed Officials. “Census Bureau and NALEO research shows that the citizenship question in the 2020 census will significantly depress response rates. This will lead to an inaccurate and unfair count.”

The Census has been conducted every 10 years since 1790. It’s mandated in the U.S. Constitution. Typically, changes in its questionnaire and collection method are carefully planned and field-tested for years before they’re implemented.

Not so during the Trump administration and the GOP-led Congress of recent years. Gupta credited the idea of asking people about their citizenship to the hard-line anti-immigrant positions of disgraced Trump advisor Steve Bannon and Kansas Secretary of State and gubernatorial candidate Kris Kobach.

Kobach has made a name for himself purging tens of thousands of mostly non-white voters from registration rolls with his Interstate Voter Registration Crosscheck program — not to be confused with ICE’s Operation Cross Check arrest sweeps — which targets people whose names can be confused with those of other voters, such as people named Lee, Jackson or Garcia, for instance. In more than 99 percent of those cases, the alleged fraud by the disenfranchised voters was unfounded.

“We have never witnessed a more systematic and thorough taking-down of the census,” said Jeri Green, of the National Urban League, a decades-long partner with the U.S. Census.

“From severe underfunding to de-scaled and terminated critical research to the still-vacant two top leadership positions at the Census Bureau and now the political foisting of an untested, unjust and unconstitutional citizenship question on the backs of already vulnerable, historically undercounted populations … the trickle down impact of an inaccurate 2020 census would be severe to the black population, whose inner city and rural communities risk losing the most in terms of federal funding, political representation and equal rights under the law.”

“Getting the census right is critical for Asian Americans,” said John C. Yang, president and executive director of Asian Americans Advancing Justice. “Inclusion of this untested question will lead to an inaccurate and unfair count of the American population and would be a derogation of the Constitution.

“The American public must hold its government accountable,” Vargas said. “History is watching.”

There are currently seven federal lawsuits filed by an array of cities, counties, states, challenging plans for census 2020, particularly over the citizenship question, Yang noted.

But there will be other battles to come. Green also described “prison-based gerrymandering” whereby incarcerated people will be counted as residents of where they’re locked up, rather than of their communities, and the per-capita benefits will therefore accrue to the region of the jail or prison.

There are also plans to rely more than ever on online responses for data collection, and away from mailed questionnaires with follow-up by census staff for non-respondents, thus creating a “digital divide” whereby those for whom computer access is more difficult are more likely to be left out.

One strategy to help overcome that, Green said, is strengthening partnerships with libraries and librarians, “the most trusted institutions in grass-roots neighborhoods.”

But in the short term, the emphasis is on convincing the Census Bureau and its Commerce Department overseer of the importance of dropping plans to query people on their or their co-habitants’ citizenship status.

Censuscounts.org is sponsored by the Asian Americans Advancing Justice, NALEO and the Leadership Conference Education Fund. The census’ own web site claims to welcome comments, but the most recent news article posted there is from early March, before the citizenship question was proposed, and despite touting its presence on Twitter, Facebook, Youtube and “other social media channels” there is no easily accessible channel for discussion of any census processes or decision.